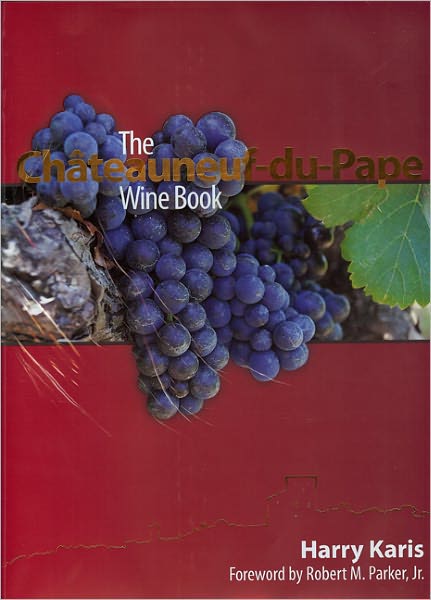 It’s not entirely clear to me which is more remarkable: the fact that before this book was published there was no definitive guide to one of France’s most unique and historical wine regions, or the fact that this gorgeously exhaustive guide was entirely self-published by a wine lover who decided to do something about that lack. Regardless, it can easily be said that the world of wine books is greatly enriched now that Harry Karis has published his opus, The Châteauneuf-du-Pape Wine Book.

I feel something of a kinship with Karis, though I’ve yet to meet him, because he seems to have come at his avocation the same way I came to mine. Born in Holland, he was a passionate consumer of wine first, and as a consumer he found something missing when it came to what he wanted to read about wine. So he decided to solve his own problem, and started down the path of a journey that is still unfolding before him.

Karis, for his part, seems to have the kind of personality that seizes upon an idea and takes it to its logical conclusion. Being a wine expert is a fourth career for him, after having tried his hand at being a rock star, a chef and restaurateur, and most recently, having gone back to school to get a medical degree, a doctor with a specialization in occupational health. Back when he was busy playing lead guitar in a Dutch rock band, Karis fell in love with wine and in 1978, at the age of 22, he had his first taste of Châteauneuf-du-Pape.

While that first taste didn’t represent a bolt of lightning out of the blue, it was obviously memorable enough for Karis to still recall it today, 34 years later. Karis’ obsession with the region really took hold in the 1990s, and he became quickly frustrated at the lack of anything even barely resembling comprehensive documentation of the region, its producers, and its wines.

So, without knowing entirely what he was getting himself into, he decided that he might as well write the book he was really wishing for.

Five years of research, six thousand wines tasted, thousands of photographs taken, and five hundred pages of writing later, Karis has almost assuredly become the world’s foremost expert on the region and its wines. And we now have one of the most painstakingly detailed guides to an individual wine appellation that the world has ever seen. Not to mention one of the most ambitious self-publishing projects in history. Karis, along with his son who is a designer, produced the entire book, including all its detailed maps, photographs, charts, and graphs.

The bulk of the Châteauneuf-du-Pape wine book, like many such detailed guides to specific wine regions, consists of profiles of the appellation’s producers, big and small. These profiles are almost always wonderfully thorough, providing a history of the domain, a general overview of their approach to winemaking, their vineyard holdings, and their wines.

Each profile also includes photos of bottles or labels, a photo of the domain itself, contact details, and a map. Perhaps most impressively, these profiles also contain detailed production information (including the exact percentage of grape varieties used) for each of the domaine’s wines, and a map showing exactly within which lieux-dits (the smallest named areas of vineyards, of which there are 131 in Châteauneuf-du-Pape) the winery holds plots of vines.

The only thing missing, really, are tasting notes and scores, which Karis has deliberately avoided, choosing to make this a comprehensive reference work, rather than a critical evaluation of the wines.

Apart from the more than 200 winery profiles, the book packs 120 pages with a staggering level of detail on everything from the history of the region, to its geology, climate, geography, viticultural practices, and more. These pages are dense with information, and populated with numerous charts, tables, graphs, and illustrations that, on the whole, are quite well done. While not everyone may get excited about a two-page-wide chart listing every single one of the 131 lieux-dits, its altitude, aspect, slope, soil composition and commune of origin, this is exactly the kind of information that anyone looking to deeply understand a region might want. I found a number of these details quite fascinating, in particular the historical charting harvest dates and average alcohol levels in a wine from the 1970s to the present, and the comprehensive listings of all the special bottlings made by different wineries in the region.

This book is clearly a reference tome. At more than six pounds, it won’t slip into a pocket, and you might even get tired holding it on your lap all evening. While I hungrily devoured the clearly and cogently written contents, I did find the writing somewhat clunky at times, its grammar, and even spelling, hinting at the lack of a professional editor and perhaps the tiniest bit of language barrier on the part of the author. These minor deficiencies, however, in no way detract from the phenomenal achievement of scholarship that this book represents, nor from my wholehearted recommendation of it for anyone who loves, or who wants to learn about one of France’s most important wine regions.

My review would not be complete without mentioning the design and layout of the book, which is both more ambitious and better done than almost any other wine book of its kind that I have seen. From the careful color-coding of book sections, to the excellent infographics throughout, the design is quite well considered and even beautiful at times. While the photography ranges in quality, most will not notice when it strays more towards amateur, especially because the many pictures make the book quite visually rich and satisfying.

For anyone who read the chapter on Châteauneuf-du-Pape in the World Atlas of Wine and wanted more, you finally have everything you could want in a single book, and more. I’m thrilled to have this tome on my bookshelf, and know I will be returning to it again and again.