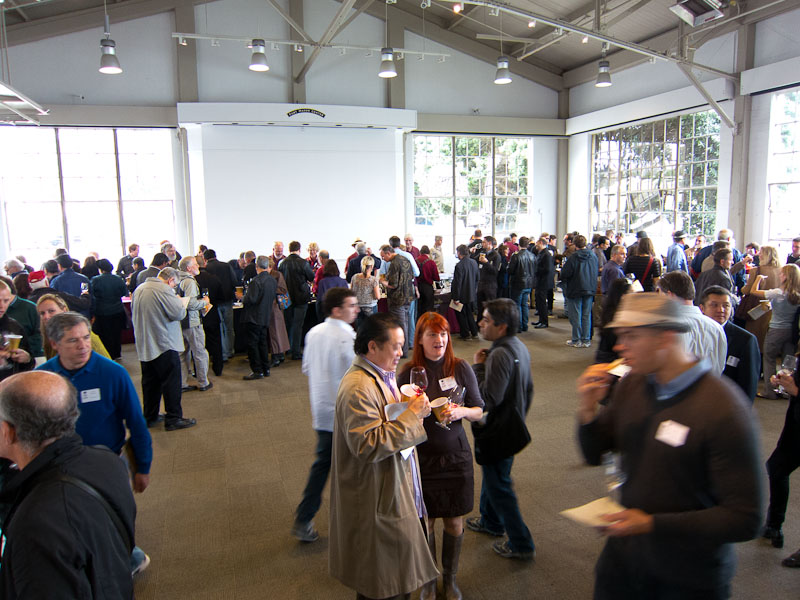 One of my unbroken refrains here at Vinography has to do with the value of large public wine tastings as opportunities to educate the palate. There’s just nothing like the chance to taste a lot of wines side by side to teach you a thing or two — about what you like and what you don’t, as well as the character of a grape, a region, or a vintage.

Tastings held by regional wine marketing organizations continue to proliferate in the San Francisco Bay Area, much to my delight. So when the winery association of the Santa Lucia Highlands decided to hold a trade tasting here in San Francisco, I jumped at the chance to better inform my sense of a region whose wines I have tasted many times, but never in comparison with one another.

The Santa Lucia Highlands has gotten an awful lot of attention in the past decade, despite being a relatively small area in California’s vast geography of AVAs (American Viticultural Areas). Cascading off the Eastern shoulders of the Santa Lucia Mountains that separate Carmel Valley from the Salinas Valley, within sight of state Highway 101, the Santa Lucia Highlands exists as a narrow strip of about 5900 acres of vineyards farmed by about 34 different winegrowers. Centered roughly around the town of Soledad, this svelte little region received its AVA status in 1991, and gained broader attention starting a few years later, in particular for Pinot Noir, which is the dominant grape planted in the area.

Many wineries, especially those focused on Pinot Noir, purchase grapes from the region, and have made vineyard sites such as Pisoni Vineyard, Garys’ Vineyard, and Rosella’s vineyard famous with high scoring wines from major critics. A number of wineries have also sprung up in the region, making it a legitimate tasting destination as well as a source for grapes.

I decided that I would use the recent tasting in San Francisco as an opportunity to focus on forming a solid perspective on Santa Lucia Highlands Pinot Noir in a way that I have not had the opportunity to do in my past tastings at broader Pinot-focused events or via the odd bottle here and there.

Before going into this tasting, my impression of SLH Pinot might be summarized as follows: a legitimate region with some very good growers who produce Pinots that lean towards the rich and ripe end of the spectrum. I’ve had some wines that I’ve really enjoyed from the region, as well as wines that have simply been just OK.

After tasting through fifty or so at this tasting, I have some more considered thoughts. Let me begin with what I believe to be the frank truth: most people let their grapes get way too damn ripe down there, and even more don’t know how to manage that ripeness well.

While the Santa Lucia Highlands isn’t exactly the heat sink that is California’s Central Valley, it isn’t exactly cool climate either. The mountains shelter the valley from the more extreme bits of weather (witness the super-scary rains mid-harvest in 2011 that didn’t really affect the region), and the sunshine is plentiful and strong.

The wines from this area tend to be, as a group, slightly higher octane than cooler regions around the state, but perhaps more relevant to my mind, they tend to simply be richer, jammier, and bolder. In the hands of a good winemaker, this uniquely California style of Pinot Noir can be quite pleasurable, and there are a few examples of such wines below. However, I am now of the opinion that in the hands of many, the wines from this region can end up just too big and clunky, weighed down by a thick ripeness, alcohol, and lack of acidity.

Far too many wines at this tasting conjured hints of Amarone in their concentration, and tasted as if they had been made with partially raisined grapes that yielded dried fruit flavors and mouth-drying tannins.

I realize I’m tarring a region with a fairly big brush here, but I’m trying to call it like I tasted it. Far too few of the wines were excellent. Of course there were a bunch of producers who make wines from this region that weren’t at the tasting, some of whose wines I know happen to be good, but I don’t think that would have changed my impression.

Even the wines that were among my favorites below don’t really represent the style of Pinot Noir that I enjoy all that much. It should be noted that my range of appreciation for Pinot is broader than many — I’m not a Burgundian dogmatist that insists that Pinot Noir over 14% is an abomination. Ripe is fine and dandy, but I tend to dislike wines that cross the line to jammy, and this tasting made it clear that in general, jammy is the dominant zone for Santa Lucia Highlands Pinot Noir. I was fairly disappointed with most of the wines I tasted.

I’m not a winemaker or winegrower, so I’m not about to start making suggestions about pick dates, brix levels at harvest, maceration times, et cetera. For all I know it might be impossible for Santa Lucia Highlands to produce more elegant Pinot Noir in an average year.

As an aside, we may be about to find that out, as 2011 looks to be one of the coolest years ever in the region. Some winemakers I’ve talked to, like Adam Lee of Siduri, say the fruit was spectacular, and marked by ripeness at lower than normal brix levels.)

But to the extent that anyone is willing to listen to me, I certainly would urge winemakers that are working with fruit from the region to experiment to see if they can’t back off a little bit on the jam. A few of the wines I tasted below hint that this is possible, there just aren’t enough people that seem to be trying.

Here are my scores and notes from the tasting.

WINES WITH A SCORE BETWEEN 9 AND 9.5
2009 Kosta Browne “Pisoni Vineyard” Pinot Noir. $72
Light to medium garnet in color, this wine has a wonderfully bright nose of raspberry and floral aromas. In the mouth, flavors of cranberry, raspberry, and cedar burst with bright juicy acidity. Wonderfully lithe and smooth on the tongue, the wine’s fine tannic structure drapes across the mouth like so much velvet. Nicely balanced and tasty. click to buy.

2009 Miura “Pisoni Vineyard” Pinot Noir. $62
Light to medium garnet in the glass, this wine smells of earth, cranberry and wonderful floral aromas. In the mouth, tart, sour cherry and raspberry flavors bounce along a stream bed of earthy brightness as leathery tannins rub the edges of the mouth. Leaner in nature than many wines from the region, this is a beautiful mouthful. click to buy.

2009 Testarossa “Garys’ Vineyard” Pinot Noir. $59
Light to medium garnet in color, this wine has a bright floral aroma that mixes with cedar and cranberry. In the mouth, flavors of cranberry, raspberry and a spicy woody note are gently held in a velvet glove of tannins that is quite sexy. Juicy acidity makes the wine lively, while the texture pours on the sexy charm. Quite lovely. click to buy.

WINES WITH A SCORE AROUND 9
2009 Kosta Browne “Rosella’s Vineyard” Pinot Noir. $72
Medium garnet in color, this wine smells of cranberry and pomegranates, with a hint of blueberry. On the palate the wine offers cranberry and raspberry flavors with tightly wound tannins and very nice acidity. click to buy.

2009 Kosta Browne “Garys’ Vineyard” Pinot Noir. $72
Light to medium garnet in the glass, this wine smells of raspberries, crushed herbs, and wet earth. In the mouth flavors of cranberry, cherry and raspberry all mix with cedar and green herbs. Very good acidity and taut tannins carry through the finish which has a hint of jamminess. Beautiful texture. click to buy.

2009 McIntyre “Estate” Pinot Noir. $36
Light to medium garnet in color, this wine smells of pomegranate and cranberry. In the mouth the wine offers juicy raspberry and green herbs tossed over a fine bed of tannins and lively acidity. The finish is long and beautiful. click to buy.

2009 McIntyre “Block 3” Pinot Noir. $48
Medium garnet in color, this wine smells of raspberries and cranberries. In the mouth a lean green willow-bark flavor underlies flavors of raspberry, cranberry and green herbs, as tacky tannins pull at the edges of the mouth. A deep wet dirt note lingers in the finish. Lovely texture. click to buy.

2009 Miura “Garys’ Vineyard” Pinot Noir. $62
Light to medium garnet in the glass, this wine smells intensely of raspberry fruit. In the mouth rich cherry and raspberry flavors swirl amidst grippy tannins that are thick and linger with the slightest bit of alcoholic heat on the finish. A rich wine, but tasty.

2010 Morgan “Double L Vineyard” Pinot Noir. $50
Light to medium purple in the glass, this wine smells of cranberry and cherries. In the mouth flavors of cranberry and cherry lean towards the bluer end of the spectrum, as a nice savory, even salty quality enters the picture. Good acidity and nice balance. click to buy.

2010 Siduri “Garys’ Vineyard” Pinot Noir. $52
A cloudy light purple color in the glass, this wine has a wonderfully floral nose of black cherry and raspberry aromas. In the mouth cherry and raspberry fruit are bright and juicy thanks to nice acidity and the flavors linger through a long finish that has just the barest hint of heat to it. Quite lovely, though. click to buy.

And for anyone that made it down this far, I’d like to offer a little bonus tidbit from the tasting that has nothing to do with Pinot Noir. Apparently there are a few acres of Riesling planted in the Santa Lucia Highlands (who knew?). In addition to all that Pinot I tasted, I also really enjoyed the 2007 Radog Riesling. For $19 it’s an excellent example of the form, with a lovely petrol and apple/pear scent, and flavors of apple, pears, and wet stones. click to buy.