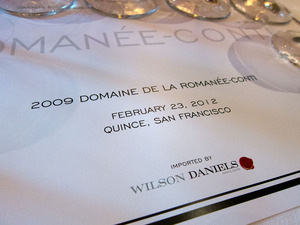 Pick your metaphor. It’s the wine world’s equivalent of being invited to the White House for a dinner, or to the G8 Summit in Davos. Or a getting a ticket to the Oscars, except there’s only thirty people in attendance, and the awards are going only to one movie. When the invitation arrives to join a very small group of people to taste the current releases from Domaine de la Romanée-Conti along with the co-director of the domaine, Aubert de Villaine, you cancel whatever plans you have, and just go.

Then, on the appointed morning, you file quietly into the lobby of Quince restaurant, and immediately realize you’re under-dressed for the occasion, despite wearing a nice pair of slacks and a button-down shirt. But all the suits hang on relaxed frames, and are accompanied by the smiles of many familiar faces, though it seems many share your sense of anticipation.

You wait, self-consciously sipping a glass of Leflaive white Burgundy, the specifics of which you forget almost as soon as you see the label, suddenly aware of a stark, simple fact. You are the only person in the room who doesn’t actually make their living, or any living, really, from the world of wine. Surrounded by sommeliers, importers, retailers, and a select few journalists who are actually so good that people regularly pay them enough to write about wine that they can feed their families, you feel profoundly out of place. You make small talk, also conscious that you’ve only been (quite) lucky enough to taste about three DRC wines in your short lifetime, each with between ten and thirty years of age on them, and therefore have no context whatsoever with which to compare these infant wines.

Steeling yourself with the memories of all the tasting you did in Burgundy a couple of years ago, you tell yourself that you know what good Burgundy tastes like, even just two short months after harvest. And even though you’re about to have more dollars worth of wine in your mouth in the next hour than you’ve had in the past year combined, you pretend you’re not intimidated, and do a fairly good job of convincing yourself.

And then everyone is sitting down. Aubert de Villaine is sits at a small round table and is joined by three or four others. An inner sanctum? Close friends? Or just people who saw empty seats at the “power” table?

The rest of you settle in, radiating out from the nexus of the room. You recall from your brief conversation with him in Beaune that De Villaine is soft-spoken, and so you snag a seat close enough to hear him but not so close to imply you matter in the unspoken hierarchy of the room. Then after an introduction from Wilson Daniels, the importer that has arranged this tasting, de Villaine, the co-director of Domaine de la Romanee-Conti stands up, uncessarily straightens his already immaculate grey three-piece suit and addresses the room.

The room is silent, except for the (perhaps annoying) faint clicking of your keyboard, and within a sentence or two, you’re just another journalist, doing your job. And loving every fucking minute of it.

Thank you. it’s wonderful to be in a room like this. Most of you I know, we have been tasting together many times before. It is a pleasure to be back among this family. Last year’s tasting was much smaller. We haven’t had a large tasting like this for a few years. It’s a very good thing and I am very pleased to do it. And in a room that is full of wonderful scents. Earlier they were pouring the wine, and I could smell it. In New York, [where the same tasting was conducted the previous week] the smell was different, perhaps because of the Corton.

I’ll be very short about the vintage, to tell you a few things. Then we will taste the wines. What will be interesting will be to discuss the wines, and I’ll be glad to answer your questions about the wines and about anything else. This is why I’m here, to fill in some of the things you want to know about the domaine or about Burgundy.

2009 is a vintage, that, like many things in life, didn’t start with the best outlook. We had a very early bud break, with fears of frost that this occurrence brings with it. Fortunately there was no frost, but we did have a difficult season after that. We had rain in April, May, June, and July. The rest of the time it was mostly very hot weather, but it also rained regularly. This is of course a condition that makes it difficult, especially for us that choose to farm biodynamically. In these conditions you have to fight all the time the natural attacks from everywhere. You know, there’s something you realize after everything is over and when the grapes are in the vat. These conditions that seem so bad are actually very important. On the one hand with mildew and odium, it reduces quantity, and creates a balance to which the vigneron has to listen. You have to listen to the balance between the yield, climactic conditions, all these elements of the vintage. I’m sorry today I’m having difficulty with my English. You see, the importance of listening and not trying to fight too much the natural conditions because they create this important balance.

In 2009 these rains we received were very important for the vines. We had a real drought in August with the exception of one storm which made us wet for only one night. But the drought was compensated for by the humidity the vines had in the Spring, which allowed especially the Grand Cru, whose roots go deep, to find what they needed in the drought, and maturity progressed with harmony and balance.

The flowering was very good. It lasted something like two weeks, and the berries flowered without much millerandage, perhaps because a lot of millerandage had been created before by humid conditions.

When harvest arrived at beginning of September, I decided to wait for a little more. We could have started earlier, but the yield was important, and we waited until the 10th of Septeber. We harvested between the 10th and the 18th, and in the middle, something very unusual: the harvest of Montrachet.

The Chardonnay in 2009, just like with 2011, started quite late compared to the Pinot. During the whole year, their evolution was behind Pinot. Which made them — for instance, the flowering was less favorable for Chardonnay. The yield finally from the Chardonnay was not as important, than from the Pinot. At the end what happened is something I rarely sees a progression of maturity of the Chardonnay extremely fast. In the last 2 weeks [before harvest] we saw the progression [of sugars] being something like 2% per week. Finally the Montrachet was ripe practically at the same time as the Pinot and we had to pick it right in the middle of the Pinot Harvest.

You will see the results of this in the style, it is a very interesting style. Very different from the usual opulence in our Montrachet. The opulence is there bit it is hidden by a minerality that is very present.

Regarding the reds, what else can I say? The mark of 2009 is that you have and exceptional vintage, both because of the quantity and because of the quality. For us, we had a quantity of 30 hectoliters per hectare. This is very high for us. We had between 27 and 32 hectoliters per hectare in all the vineyards. Each of these wines, as you know, comes from vineyards that are average 50 years old minimum, they are all made from the same kinds of grapes, and all have the same kind of vilification and élevage. All, that is, except the Vosne-Romanée Premiere Cru, which is made with the young vines from the old vineyards. And in 2009, this wine is als contains one young vineyard of La Tâche. There’s an average of 12-15 years [of vine age] in this vineyard.

And, of course, we have the Corton for the first time. You can follow this tasting order that is laid out here on the sheet, with the Vosne-Romanée Premiere Cru first, or perhaps you can start with the Corton, where we are really in another world. We are in the Cote de Beaune and you can see how different it is. Yes, I think you can do the reverse, Start with the Corton.

What else can I say? We can speak afterwards of your impressions. For me, I will add one more thing. I’ve never seen a vintage that is more the cousin of another than this vintage is to 1959. A large crop, the wines extremely healthy, and wines with a character of seduction, tenderness, immediately accessible. It’s really remarkable remarkable, I’ve never seen such closeness between two vintages as between this 2009 and 1959.

I’ll let you taste on these impressions, And then we can discuss.

Take your time. These wines need some time for you to have conversation [with them]. We have the possibility to dialogue with them for as much time as we want. Take your time. 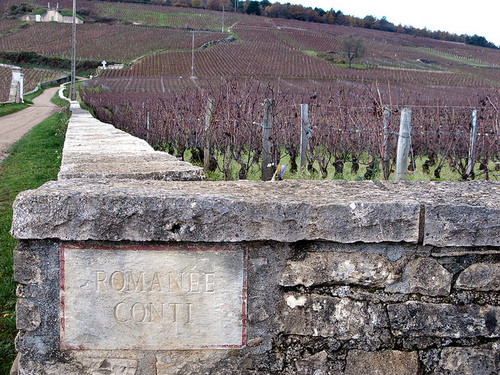