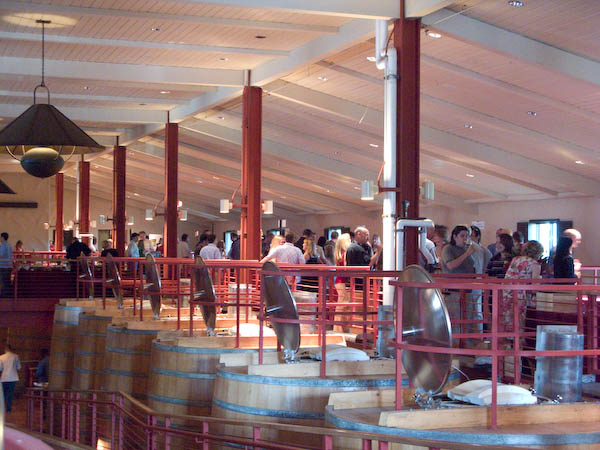 While often considered a single “place” when it comes to wine, Napa is hardly a monolithic growing region. Each of its 14 established AVAs (American Viticultural Areas) lays claim to a separate identity, characterized by geology, microclimate, and different histories of production.

Two weeks ago the Oakville Winegrowers Association put on its annual Taste of Oakville event, which gives members of the wine trade and the press an opportunity to sample wines from its members. This meant an opportunity to taste through a lot of excellent 2008 and 2009 Cabernets (as well as a few other reds and a few random whites). 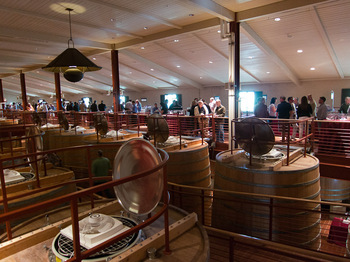 There were a few wines at the tasting which I didn’t get a chance to taste, as they had run out of wine by the time I got there, but the list below represents all but about 20 of the wines poured. The tasting took place on the upper level catwalks of the Robert Mondavi Winery surrounding their large oak fermentation tanks.

The 2009 vintage continues to show extremely well. Most wines displayed pliable, softer tannins, even in their fairly youthful state, and while many wines were rich and bold, few tasted over-ripe. I continue to be a fan of the vintage, which I think will age extremely well, thanks to generally good acidity across the board.

1993 Dalla Valle Vineyards Cabernet Sauvignon $130
Medium ruby in the glass, this wine has a slightly minty nose of chocolate covered cherry aromas. In the mouth the wine has remarkable acidity that lifts beautifully textured flavors of cedar, earth, cherry and incense off the palate and sends them soaring through the mouth. The tannins are powdery and velvety. I’d compare this wine to red velvet cake if it weren’t so much infinitely better than that. Wow. click to buy.

RED WINES WITH A SCORE AROUND 9.5

2001 BOND Vecina Proprietary Red $275
A cloudy medium garnet in color, this wine smells of salty olives, black cherries, and green willow bark. In the mouth, cherry fruit mixes with distinctly savory black olive flavors and a spicy note that lingers with the powdery tannins in a long finish. Quite unique. click to buy.

2007 BOND St. Eden Proprietary Red $275
Cloudy medium garnet in the glass, this wine smells of cherry, cedar, and cocoa powder. In the mouth those three elements tango with a slow precision across the tongue, slipping into suspended animation for the persistent finish. Fantastic acidity makes the cherry fruit bright and earthy tones ground the wine and give it gravitas. Excellent. click to buy.

2009 Dalla Valle “Collina” Red Wine, Napa Valley $85
Medium garnet in color, this wine smells of flowers and bright cherry fruit. In the mouth cherry, cocoa powder and exceptionally juicy acidity make this a difficult wine to spit out. Lush, vibrant, and quite compelling. By the time the powdery tannins emerge at the edges of the mouth you’ve already gone back for a second sip. Phenomenal. click to buy.

2009 Dalla Valle Vineyards Cabernet Sauvignon $150
Medium to dark garnet in the glass, this wine smells of cherry and a hint of cedar. In the mouth the wine has a core of cherry and cedar flavors that are made juicy by great acidity, and given complexity by a darker earthy tone that rumbles along below the bouncy cherry fruit notes. Supple, muscular tannins and a long finish round out this exceptional wine. click to buy.

2009 Futo Estate Red Wine $225
Medium to dark garnet in the glass, this wine smells of dark cherry fruit with floral overtones. In the mouth flavors of earth, cherry, cassis, and dark chocolate swirl on a beautifully textured bed of acidity. Powdery tannins are soft and velvety. This wine has a rather unique flavor to it thanks to a good amount of Petite Verdot blended into it. Exceptional. click to buy.

1993 Harlan Estate Proprietary Red Wine $n/a
Medium ruby in the glass, this wine smells of eucalyptus, cherry, and cedar. In the mouth cherry and exotic woods like sandalwood and cedar mix with a minty note. Great acidity ensures the wine remains juicy and youthful, though a tiny bit of alcoholic heat creeps into the finish. With the rest of the wine so damn tasty, though, it’s hard to get upset at this flicker in the back of the throat. click to buy.

2008 Rudd Oakville Estate Cabernet Sauvignon $125
Medium to dark garnet in the glass, this wine smells of bright cherry fruit, wet earth, and tobacco. In the mouth the wine has a distinctly earthy cast to it, with rich, dusty flavors of cherry, chocolate, and deep tobacco notes. Powdery tannins coat the mouth and linger with the long finish. Nice balance, excellent acidity. click to buy.

RED WINES WITH A SCORE BETWEEN 9 AND 9.5

2009 Screaming Eagle Cabernet Sauvignon $750
Medium to dark garnet in color, this wine smells of tobacco, cherry, and a roasted nut and cocoa powder concoction that is quite distinctive. In the mouth the wine offers cherry flavors again tinged with a roasted nutty quality and dusted with cocoa powder. The fruit is bright with good acidity, and the finish is long, though with a touch of alcoholic heat. click to buy.

2009 Futo “OV” Red Wine $90
Medium to dark garnet in the glass, this wine has a nose of sweet cherry aromas. In the mouth that bright cherry fruit continues to dominate, mixed with flavors of chocolate and cola. Powdery tannins emerge on the long lingering finish. Good acidity ad balance. click to buy.

2007 Gamble Family Vineyards Family Home Cabernet Sauvignon $60
Medium to dark garnet in color, this wine has a wonderful minty cherry aroma with a hint of raisins. In the mouth bright cherry fruit takes on an earthy note while minty high notes float above the core of juiciness. Supple tannins and good acidity. Tasty. click to buy.

2008 Harlan Estate The Maiden Proprietary Red Wine $150
Medium to dark garnet in the glass, this wine has a fruity, juicy nose of cherry aromas. In the mouth flavors of cherry and sweet oak swirl together across the palate, leaving a slight bitterness as the wine finishes. Fantastic acidity makes the fruit very lively and mouthwatering, and tacky tannins should mellow with a few years in the bottle. Excellent. click to buy.

2009 Tor Beckstoffer To Kalon Clone 6 Cabernet Sauvignon $150
Medium to dark garnet in the glass, this wine smells of cherry and tobacco. In the mouth tobacco and cherry flavors take on both earthier tones, as well as floral highlights that morph to a spiciness that lingers through an exceptionally long finish. Soft, supple tannins seem to taste of cedar. Great acidity, nice balance. click to buy.

2009 Oakville East Exposure Cabernet Sauvignon $80
Medium to dark garnet in the glass, this wine smells of black cherry, cocoa powder and wet dirt. In the mouth lush flavors of dark chocolate and black cherry are enclosed in a glove of supple tannins. Good acidity. Long finish. click to buy.

2008 Opus One Bordeaux Blend $200
Medium garnet in the glass, this wine smells of bright sweet cherry fruit with a dash of new oak. In the mouth flavors of cherry, sweet oak, and cocoa powder are nicely integrated and balanced, with lively acidity. Powdery tannins coat the mouth. Good finish. The best vintage of Opus One I’ve tasted in a long time. click to buy.

2008 Paradigm Cabernet Sauvignon $62
Medium garnet in the glass, this wine smells of sweet cherries and new oak. In the mouth bright cherry fruit comes alive with good acidity surrounded by tacky tannins. Has a nice purity. click to buy.

WHITE WINES WITH A SCORE BETWEEN 7.5 AND 8
2010 Saddleback Cellars Oakville Estate Pinot Blanc $24