, this weekend-long party serves to both celebrate Napa, it’s wines, and the lifestyle they represent, as well as do a whole hell of a lot of good for the local community.

The centerpieces to the weekend are the barrel auction, where entire barrels of wine are available for sale, and the live auction, where packages of wine, travel, and other experiences are offered to the highest bidder. Proceeds from the auction are donated to local charities of all kinds, who do pretty extraordinary things with the millions raised each year by the event.

The weekend begins with dinner parties at wineries, an open-air marketplace and barrel tasting, where the barrels are auctioned off to the 10 highest bidders on each barrel, and culminates with the all day auction party at Meadowood Resort that often goes late into the evening with drinking and dancing.

Historically a star-studded event, often featuring celebrity headliners, the auction has been toned down a bit in recent years, but famous faces do have a habit of turning up, both at the request of the vintners, as well as on their own accord. I found myself seated 10 feet from Lt. Governor Gavin Newsom, for instance, whose Plumpjack and CADE wineries were offering auction items this year, and the audience was also treated to a short concert by superstar violinist Charles Yang at one point. Oh yeah, and Emeril cooked us all dinner, but not before he sold the shirt off his back for charity.

The event tends to attract the who’s-who of Napa, as well as their most loyal supporters, both in a mood of generosity.

Holding a charity auction on the day following a 200-plus point drop in the Dow Jones Industrial Average would make anyone’s stomach tighten into a knot, and indeed, the bidding seemed subdued at the start of the auction.

“I’ve never seen so many lots go for close to $30,000,” said my table-mate, who was attending the auction from New York for the thirteenth time with his wife. “This is bad,” he added with a worried frown.

But as the afternoon played out, and the wine continued to flow, bidding got a bit more heated, but still not at the levels I remembered from my last visit to the auction, several years ago. I was surprised to see some very impressive auction lots go for much less than they should have, including a lot that included an exceptional back-stage look at the upcoming America’s Cup (including a ride on one of the boats), as well as a lot that featured a stunning vintage Jaguar.

The most popular lots of the evening proved to be a luxury African safari package, which was bought twice for $360,000, and a series of private concerts by the singing group Lady Antebellum. The latter was purchased by Barbara Banke, the widow of wine mogul Jess Jackson, accompanied by her daughter Katie Jackson, who may or may not have added a bit of encouragement to the bidding.

In all, the auction brought in just over $8 million, up from $7.3 million last year, and headed back towards the double digit heights that marked its pre-recession records. In this kind of economy, and especially after the poor economic news and market plop just twenty-four hours earlier, such a result can’t be seen as anything but an unqualified success.

“We’re thrilled,” said Linda Reiff, Executive Director of the Vintners Association, expressing not an insignificant amount of relief and justified pride the morning after the festivities.

Perhaps the most impressive aspect of the auction were the minutes following the auction of the final lot. According to tradition, once all the fancy auction lots have been sold, auctioneers Fritz Hatton and Ursula Hermacinski ask people to simply raise their paddles to give without any reward other than the pleasure of doing good.

Hatton optimistically opened the bidding for pure charity at $100,000, and as the tent held its breath, no less than seven paddles were raised, producing a roar of applause from the audience, and a somewhat taken-aback Hatton. In the end, close to a million dollars was simply donated to charities, mostly from vintners in the audience.

It was a remarkable scene of generosity, and strong ending to what ended up being an impressive fundraising effort.

Here are some of the other scenes from the Auction. Enjoy. 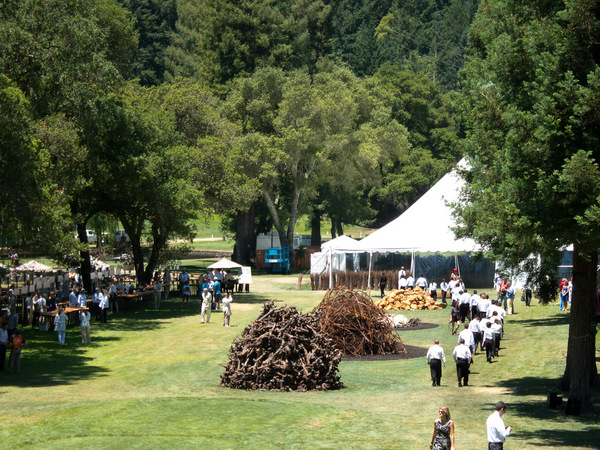 The view of the lawn at Meadowood Resort, with a line of servers filing past sculptures designed by auction chair Molly Chappellet. 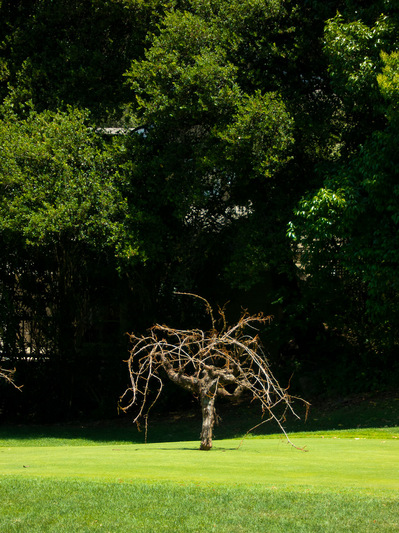 An old grapevine temporarily springing from the putting green at Meadowood as part of the decor conceived by Mrs. Chappellet. 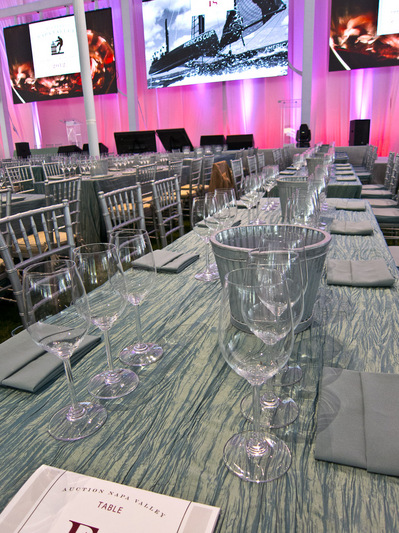 Inside the tent before the crowds arrive. 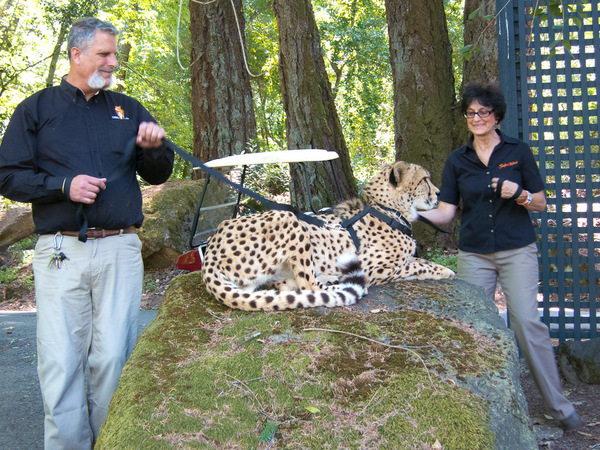 Now THAT’s what I call advertising. A live cheetah hangs out on a rock to excite prospective bidders on the luxury safari package on offer. It eventually sold for $720,000. 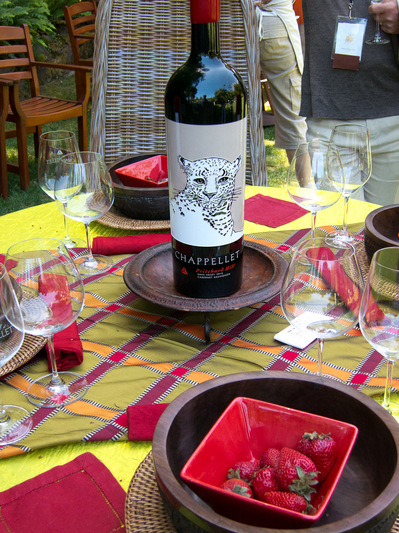 And of course you’d want your wine bottles etched with cheetahs, too, because, well why not? 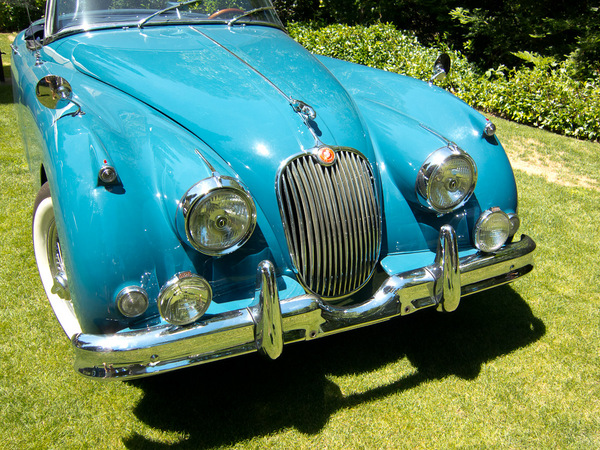 A different kind of cat. A vintage Jaguar that was accompanied by a lot of wine for another auction lot. 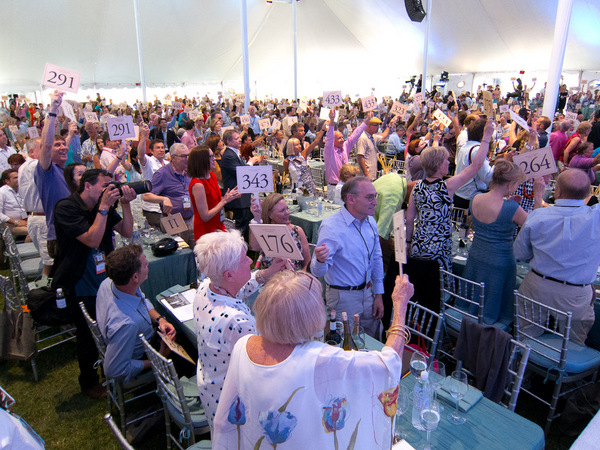 Paddles ready?! Everyone practices raising their paddles before the bidding begins. 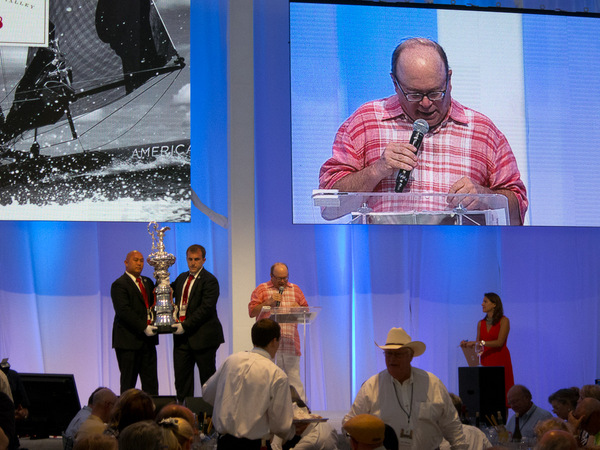 No you don’t get the trophy. But yes, that’s the REAL America’s Cup on stage as bidders compete for the chance to see it in style and ride on one of the boats. 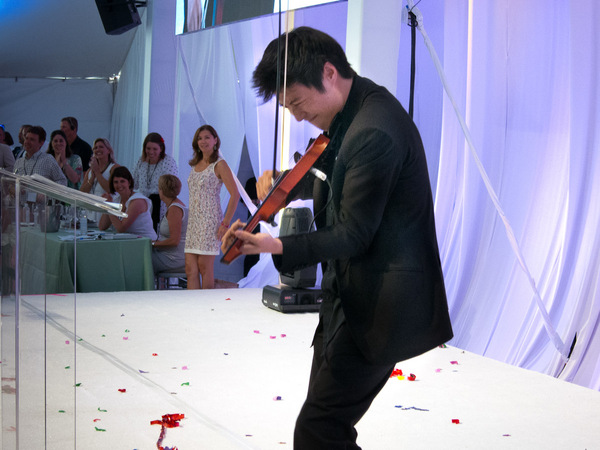 Young prodigy Charles Yang shows up and rocks the tent on violin. It was hard to believe all that sound was coming from one instrument. The kid is quite the star. 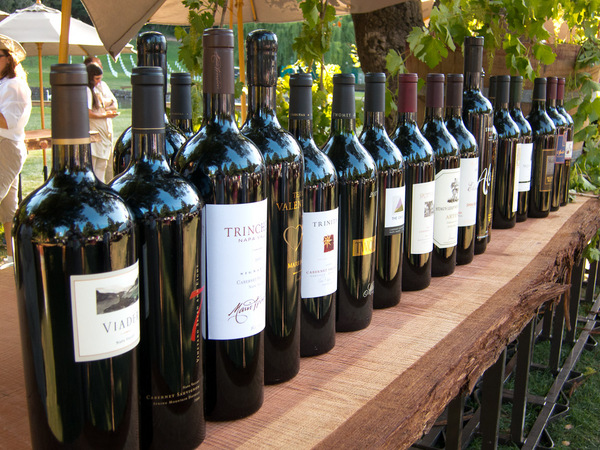 Because you can never have enough wine. A lineup of magnums waits to be poured at the dinner following the auction.

And as for what I drank? That will have to wait for another post.