A Bottle by Any Other Shape? 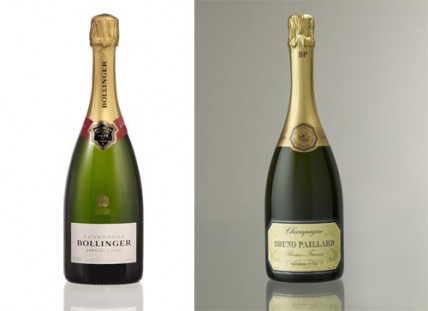 for allegedly copying the shape of their bottle.

Big brands tend to take such things very seriously, and everything from perfume bottles to soft drink bottles have been registered trademarks for years.

According to a Decanter.Com story (from which I’ve nicked the image to the right) the Palliard bottle shape is based on a 19th century bottle they found in their cellar. Well, unfortunately, Bollinger says the same thing. When you use a 150-year old bottle as the mold, or even the inspiration for your bottle, can you still trademark that shape?

The answer appears to be yes, just as a modern musician can copyright a performance of a piece of Mozart that has been in the public domain for more than 200 years.

Convincing a judge that another bottle looks similar enough to yours to cause confusion with consumers is another thing altogether, however, and it is this principle upon which any legal action will have to rest. Coke famously lost exactly such a case in Europe quite recently, which doesn’t bode well for Palliard, though I must admit, the Bollinger bottle looks a bit closer to the Palliard bottle than the Pepsi did to the Coke.

How much do you pay attention to bottle shape? I can recall a few specific and distinctive bottle shapes that I associate with certain brands — the extremely conical Krug Champagne bottle, the melted slump of the Pere Anselme Chateauneuf-du-Pape bottle — but generally the shape of the bottle is not a part of what I use to identify a specific brand. I pay much more attention to the label design and the colors of the packaging. It must be said, however, that bottle shape seems to be a more common point of differentiation in Champagne than elsewhere, with brands such as Laurent Perrier, and even Dom Perignon having their own specific bottle shapes.

It’s easy to see both sides of this conflict. On the one hand, as a producer, you want to do whatever you can to make your product unique and recognizable by consumers, and you have a right to be able to prevent your competitors from blatantly copying what you do in an attempt to steal your customers. On the other hand, there are only so many bottle shapes out there (leaving aside those that are dramatic departures from a basic format) and there is bound to be some similarity simply based on functional needs.

I’m looking forward to the detailed morphological analysis by EU judges, which I’m sure will prove riveting reading…. “The diameter of the neck when the curve of the bottle reaches two degrees from the vertical is 11 millimetres on this bottle but it is 9 millimetres on the other.”