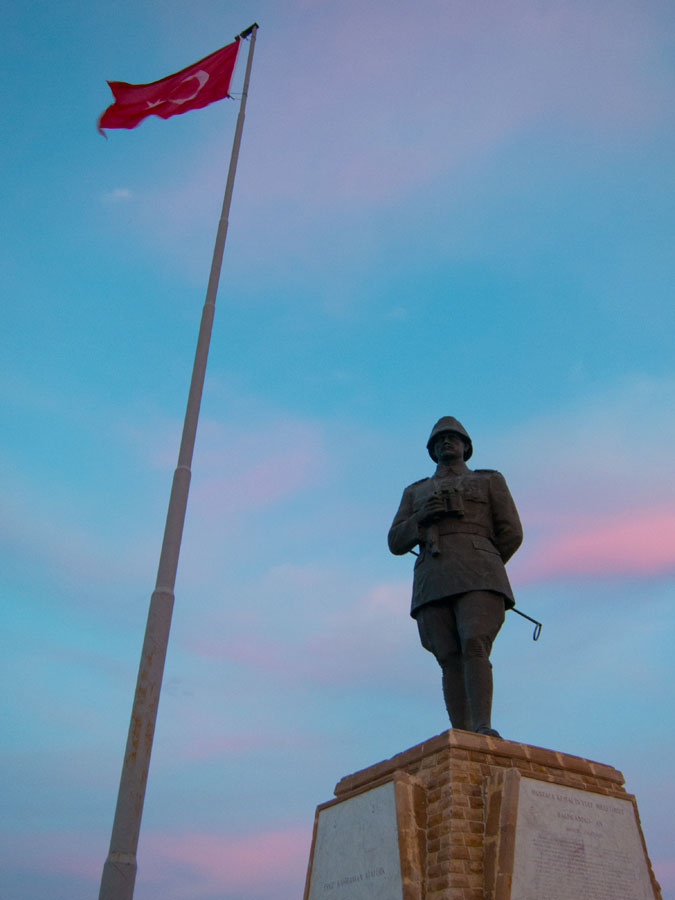 This morning I woke to the sounds of the muezzin’s call to prayer on the banks of the Bosphorus. Sleeping in the shadow of the ancient walls of Constantinople and a stones throw from the Hagia Sophia, I dreamed of an olive harvest, but woke before I had the chance to sample my efforts.

Thanks to the folks at of Wines of Turkey, I’m in the country for a couple of weeks to explore and to participate in the European Wine Bloggers Conference, which has decamped to Izmir later this week for their annual symposium.

Today I ate lunch on the back patio of a winemaker’s home, overlooking the Dardanelles, savoring slow braised lamb in olive oil and oregano and fluffy rice with currants and pine nuts. Later I walked on the beach at Gallipoli, where tens of thousands lost their lives in fruitless struggle, and then watched the sun set over the Agean.

I’m quite keen to get an inside look into Turkey’s burgeoning wine scene, which, despite leaning on thousands of years of history, has really only gotten going in the last 10 years. Before then, like so many other countries whose fertile soils can produce an abundance of grapes, Turkey mostly produced poor quality table wine to be sold cheaply to the masses. In fact, most of the country’s production was controlled by the company that happened also to be the largest corporation in Turkey — a company whose name is quite familiar to those in the wine business: Diageo (who bought much of the originally state-controlled operations).

But in the last decade, efforts have slowly begun, and then accelerated, to producing higher-quality wines that might be recognizable and palatable to those of us who don’t buy our wines in gallon jugs.

These are the wines that I am here to taste, with a particular interest in those made from grapes I am only just beginning to be able to pronounce: Kalecik Karasi, Bogazkere , Narince, Öküzgözü, and more. Doubtless I will be tasting a lot of Cabernet, Merlot, Chardonnay, and Sauvignon Blanc as well, since these are the “famous” grapes that many Turkish customers all but demand most local producers offer up for sale.

This is a wine region very much in its modern infancy, no matter its deep historical roots. For the first time in the past few years Turkey has been looking outside its borders to see who might be interested in its wines.

I am, and look forward to sharing my discoveries with you.

Photo of the statue of Atatürk at the memorial at Gallipoli