At the age of 17, Seyit Karagozoglu was far from home. For three years he had been away from his native Turkey at a boarding school in Switzerland. His father, a tobacco dealer, wanted him to receive an international education. One weekend in his third year, Karagozoglu’s father came to visit, and they went out to dinner. His father ordered a bottle of Musigny, and gave the young man a glass.

“It was the first time I had ever had a French wine, and I remember the taste to this day. How could a wine be this good?” says Karagozoglu. “It was a huge discovery for me.”

A couple of years later, Karagozoglu ended up at Pepperdine University on the coast of Malibu. “I discovered that Americans make wine and that they are good! I’ve been a wine lover ever since” he says.

Karagozoglu grew up in the tobacco business, and by all accounts was set to succeed his father in the intricate politics of a business that ran within a state-run monopoly. Even under the Turkish Republic which followed the end of the Ottoman Empire in 1923 the government maintained control over tobacco, along with beer and spirits (until 2003 when the monopoly was abolished).

As he learned to navigate the relationships that lay at the heart of the state bureaucracy, Karagozoglu understood that these were the players that would have to be involved in getting wine approved for sale in the country. So in 1993, at the age of 27 he started a small company to import foreign wine to Turkey for the first time, working through the machinations of the state monopoly.

“I remembered the selection of wines that were available when I was a student in Los Angeles, and knew that Turkey would, and should, have more wines available to consumers.”

Karagozoglu has been joined by many others in importing foreign wines to Turkey since the state monopoly ended, but his head start in the import business led to a great success. His company continues to import some of the most premium foreign wines to Turkey, including Chateau Beaucastel, Domaine Joseph Drouhin, Antinori, Prunotto, La Spinetta, and Dominus among others.

During his necessary visits to these and many other producers around the world, Karagözoglu got a world-class education in terroir, which gave him a different lens with which to look at his own country.

“I realized Turkey as the world’s fifth largest grape grower had the right soil, and the right climate, we just had to make better wines. And as an importer working with some of the best names of the wine world I knew the trends, I knew what consumers liked in the international market, etc. So why not make wine? It was surely a challenge but it could be worth it one day.”

With a methodical approach that was no doubt instrumental in his business success, Karagozoglu set out to create a winery that would produce both local and international grape varieties.

“As an importer I knew too well that the world was full of Cabs, Merlots, Chardonnays. The last thing the world needed was a Turkish Cabernet. And we were lucky in Turkey as we had many indigenous varieties. But as a new winery that had to have a decent cash flow, however boutique it might be, I knew I had to show to the Turkish consumers that we at Pasaeli could make a decent Cab or Bordeaux blend so that the Turkish consumers would notice us. We could source the best and most suitable rootstocks grafted with the right clones from France, plant a proper vineyard and grow quality fruit. Once we had a consumer following we would then start focusing on indigenous varieties” says Karagozoglu.

But first he needed a winemaker. And as far as he was concerned there was only one place to look: Italy.

“I thought (and still do) that someone from Italy would be the best choice. Because Italian winemakers usually work with international varieties like Cabernet and Merlot but also with many of Italy’s indigenous varieties they have a broader vision and would be better suited for my needs” says Karagozoglu.

The third winemaker he met was superstar Andrea Paoletti, whose work with Tignanello, Ornellaia, Isole e Olena, and Valdicava, among others has made him one of Italy’s hottest consulting winemakers. The two hit it off, and Paoletti came on board as a consultant to shape every aspect of the viticulture and enology programs at Pasaeli.

In 2002, in close collaboration with Paoletti, Karagozoglu planted grapes in his home region of Izmir. His initial plantings were Cabernet Sauvignon, Cabernet Franc, Merlot, and Petit Verdot, inspired by Christian Moueix of Chateau Petrus, from whom Karagözoglu learned several things that have shaped his vision for what would become Pasaeli Winery.

“When I found out that he makes Petrus in old style cement tanks I was extremely surprised. I had always associated cement tanks with the ones that theTurkish Monopoly used for making awful wines. Christian taught me that 80-90% of good wine is due to good quality grapes, rest is due to technology. He said wine technology should not be like rocket science technology, if it was good enough and if you had good quality fruit one could make great wines” recalls Karagozoglu.

Karagozoglu’s strategy, coupled with the winemaking talents of Paoletti, proved successful, and after a few years the two were able to begin sourcing indigenous fruit from local vineyards nearby. The only problem being that these grapes 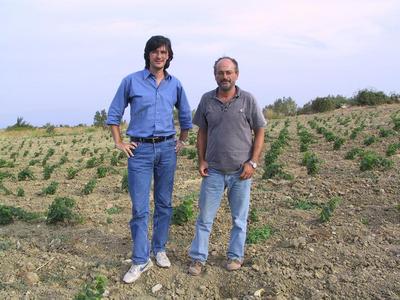 “All the most well known Turkish grapes like Narince, Emir, Ökuzgözü, and Bogazkere come from central Turkey or eastern Turkey. I did not want to source grapes from hundreds of miles away. I said to myself that I must focus on varieties that are grown close to my vineyards, which are Yapincak, Karalahna, Karasakiz. But most Turkish consumers have not heard of Yapincak or Karasakiz” admits Karagozoglu.

Undeterred, Karagozoglu pushed forward. In fact he and Paoletti have undertaken something of a mission to rescue some of Turkey’s heritage grape varieties from obscurity, and in some cases from near exctinction. It seems to be a successful partnership, and one that is filled with mutual passion. Karagozoglu decides which wines will be made, and drives Paoletti to both change and improve each year, and Paoletti sets the bar for quality and shapes the overall winemaking program.

From the winery’s two estate vineyards, and purchased fruit from surrounding vineyards,

Pasaeli makes a small portfolio of primarily single-vineyard wines totaling about 3000 cases per year. Most of the fermentation for red wines is done with native yeasts, but on occasion commercial yeasts are use to finish fermentation. Whites and rosé wines are made with commercial yeasts, and when necessary some of the wines are fined with Bentonite or egg whites, and are minimally filtered.

Given that the winery’s first vintage was 2005, I find it quite remarkable that Pasaeli makes some of the highest quality wines I tasted while in Turkey, including some of the sole examples of particular grape varieties like Koloroko. These wines offer clear evidence of what Turkey’s potential may be as an internationally recognized source of unique, and high quality wines. Grab a glass of Yapincak and taste something exotic!

Note that I did not get to visit this winery, and my tasting of their wines took place over a couple of days under various circumstances, including a sit down tasting and a walk-around tasting. Consequently please excuse the omission of proper tasting notes for some, whose scores I recorded as I tasted them, but skipped the note for lack of time.

2011 Pasaeli Calkarasi Rosé, Izmir
Light ruby in the glass, with a slightly orange cast, this wine smells of orange peels and bright fresh berries. In the mouth bright mixed red berry fruit is quite juicy thanks to great acidity, while a citrusy orange peel note emerges along with the texture of light tannins through the finish. Delicious. Score: around 9

2011 Paseli Yapincak, Thrace
Light gold in the glass, this wine smells of lemony melted butter and a hint of something more resiny and mineral. In the mouth the wine has a bright, juicy combination of saline and lemon flavors with a hint of more creamy butter quality that is quite delicious and speaks of some oak. A hint of quince and spice lingers on the finish. Quite delicious. 12.5% alcohol. Score: around 9

2010 Pasaeli Kolorko, Thrace
Pale gold in the glass, this wine smells of honey and apples and freshly melted candle wax. In the mouth, the waxy flavor persists, with a deep stony undertone. Unique and arresting flavors of nuts, flowers, and unripe apples combine to make a remarkably unusual package. Excellent acidity, great personality. Score: between 8.5 and 9.

2011 Pasaeli Rosé, Izmir
Pale salmon pink in the glass, this wine smells of berries and wet stones. In the mouth flavors of rosehip, citrus and hibiscus all mix with a wonderfully saline quality and a kick of bracing acidity. A pleasant, even mouthwatering sour note emerges in the finish. Delightful. A blend of Calkarasi and Karasakis. Score: between 8.5 and 9.

2009 Pasaeli “K2” Red Blend, Izmir
I did not record a tasting note for this wine, which is a blend of Cabernet Sauvignon, Cabernet Franc, Merlot, and Petit Verdot, but I tasted it as part of a walk around tasting. Score: around 8.5

2010 Pasaeli “Serena” Shiraz, Izmir
I did not record a tasting note for this wine. Score: around 8.5

2011 Pasaeli “6n” Red Blend, Izmir
Medium garnet in the glass, this wine smells of tangy berries with a hint of funk to them. In the mouth flavors of sour cherry and oiled leather have an acidopholus quality to them. Excellent acidity. A blend of 75% Karasakis and 25% Merlot. Score: between 8 and 8.5.

2009 Pasaeli Red Blend, Thrace
I did not record a tasting note for this wine, which is a blend of Karalahna and Merlot, but I tasted it as part of a walk around tasting. Score: between 8 and 8.5.

2010 Pasaeli “Serena” Red Blend, Izmir
I did not record a tasting note for this wine, which is a blend of Cabernet and Merlot. Score: around 7.5

Unfortunately, these wines are not yet imported into the U.S., and can be found only on a very limited basis outside of Turkey.