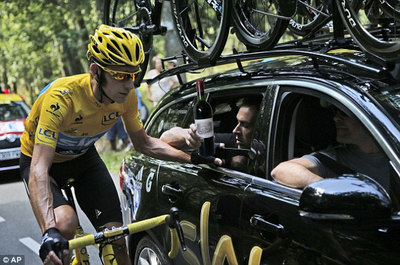 France is on the ropes when it comes to wine. I reported several weeks ago about the looming disaster of the French Wine Cliff, which threatened to send the French wine industry into a death spiral. And now hard on the heels of that reality comes another blow not only to the wine industry, but to a great source of national pride: the Tour de France.

Lance Armstrong’s formal admission this week that he used performance enhancing drugs provoked outrage and near panic in France, not because of the admission itself, which was widely expected, but because of his disclosure of exactly how he managed to fool decades worth of testing by WADA, the World Anti Doping Agency.

The answer, which many consider to be the worst news for France in many decades, was red wine. Armstrong apparently exploited a property of red wine that scientists have only recently reported: namely that drinking red wine masks testosterone levels to the point that it can obscure irregularities in those levels caused by performance enhancing drugs.

Like the final puzzle piece in many mysteries, once in place, this fact made many things clear for long time observers of the Tour de France, such as the tendency for team pacing cars to hand out bottles of Bordeaux following each stage, and the cases of empty Chateauneuf-du-Pape piled up behind each team’s barracks during the race.

Armstrong was remarkably candid when it came to his technique for beating the drug tests. “I was basically drunk off my ass most of the time,” he said to reporters at a press conference, “but you know, when you’re drinking the really good shit, like I did, you don’t get sloppy drunk, and you don’t get a hangover.”

Like rock stars and celebrities who put specific and sometimes outrageous terms into their contracts, Armstrong and his team mates requested Mouton Rothschild, Haut Brion, and Chateau Latour among others.

The revelation about the link between red wine and cheating in the Tour de France prompted new riots in the Languedoc after wine brokers lowered their bids for red wine contracts to the lowest prices in recorded history, even taking into account inflation.

But not everyone sees this scandal as a disaster.

Jean Filnot, President of the Alarme League, and head of the French Prohibitionist Party, held his own press conference in response to the news.

“You see, this is what we have been telling you all along,” ranted Filnot to the two reporters present. “Even in the hands of the world’s greatest athletes, alcohol represents the liquid incarnation of evil.”

Filnot went on to renew his party’s demands that France stop drinking alcohol, refrain from dancing, and ration both salt and olive oil.

Meanwhile, the heads of most major wine regional bodies met in Dijon to formulate a strategy to combat the expected fallout from these events.

“We’re all going to triple the amount of bicycles available for rent in our districts,” said Pierre-Henry Gagey, head of the BIVB (Bureau Interprofessionnel des Vins de Bourgogne) and speaking on behalf of every major French wine region, “and all winemakers will now be subject to revised WADA protocols both during harvest and the three months prior.”

No word yet from the Amaury Sport Organization, which runs the Tour de France, in response to this news. However a source close to the organization, speaking on conditions of anonymity reported that plans were underway to change the race course itself, “to keep it as far away from those damn vineyards as possible.”

More to come as the story develops.