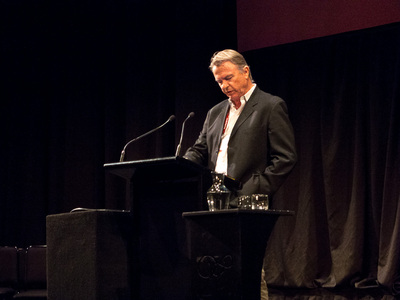 “You hire entertainers to give speeches. I don’t know who chose me to give a speech but just in case you hadn’t noticed, I’m not an entertainer. For heaven’s sake, Im the guy who chops a woman’s finger off with a blunt axe to make a point.”

Entertainer or no, Sam Neill’s keynote speech to kick off this weeks Pinot 2013 Conference in Wellington New Zealand was riotously funny. For those of you who don’t know, Neill is both a Hollywood actor, and also the proprietor of a winery called Two Paddocks in New Zealand’s Central Otago wine region.

Before he began, he cued up this video:

“I’m sorry. That was pathetic, puerile, unnecessarily flippant, and quite insulting. When I asked the committee what they wanted me to talk about, they said ‘we’d like you to set the tone.’ We’ll I’ve lowered it already,” said Neill.

He then went on to offer a minor treatise on the New Zealand use of the word “bastard” to which I can’t do justice, except to say that Neill is, indeed, one funny bastard.

“But I’ve been thinking,” offered Neill, “that we New Zealand producers are the bastards of Pinot. As in, good bastards, but also in the literal sense as well. We didn’t invent anything. We came from the European tradition. We inherited all our stuff from an old, and profound, and rich tradition. We are the bastards because we’re unwanted and unacknowledged. We live and thrive outside the big house, outside the old house. But like the best bastards anywhere, we don’t care. We take what we need. We are free to discard what we se as obsolete, and we are free to innovate where we see the need. It’s good to be bastards. It’s good to be good bastards.”

“My wife, when she saw my speech, said, ‘What are you doing? You’re talking to a room of people where 99% of them know more about wine than you.’ I said, ‘Hold on, that’s pretty harsh. It’s more like 97.5%. But recently I was asked for advice by someone who was considering buying land and planting Pinot Noir, so I thought I’d pass along what I told him. But as my wife said, you probably already know this more than I do.”

“So without further ado, here are my words of advice to prospective Pinot Producers.

#1. You are clearly barking mad. Insane. Seek medical help as soon as you possibly can.

#4. Once you’ve joined the world of Pinot you’ll work with some of the best people you’ve ever met. Bon vivants, mystics, sages, and intellects. Try not to annoy them too much. You’re already annoying me. Remember that this is not a competitive thing, it’s about collaboration. You and your neighbors are all in this together.

#5. You will be required to attend far more dinners and functions than you can possibly survive. Get your liver titanium coated ahead of time. You’re going to have to sit through such unbelievably boring speeches that you’d rather stick a fork in your eye than listen to another one of them. Like this one.

#6. They don’t call it the heartbreak grape for nothing. Expect to fall in love with everything Pinot. You must expect to have all your dreams shattered again and again. Your worst fears realized, your nights sleepless and filled with nightmares. You will need knowledge, flair, and hard work, and you should just quit now. Go check yourself into the funny farm.

#7. Learn humility, lest you have it thrust upon you. Distrust good reviews and ignore bad reviews. All wine opinion and criticism is subjective. All critics are fallible. Know thyself and thy own wine.

#8. Beware of science, and anyone who says they’re doing a scientific study.

#9. Try to avoid using the word “passion.” As in, “a passion for Pinot.” It is overused, and should, in my opinion, be reserved for the heightened emotion between two people that usually results in the discarding of trousers. As a Pinot producer you’ll lose your shirt, but you are unlikely to lose your trousers.

#10. Give thanks to those who led the way before you. The monks, the nuns, the Burgundians, the pioneers in this country. Think of the people who arrived on our shores and gazed in horror at the beer swilling pubs and went straight through town into the countryside to plant Pinot Noir. Give thanks, and tread carefully knowing you are honored to tread in their footsteps.”

As I said. One funny bastard. And a great way to start four days of immersion into New Zealand Pinot Noir.