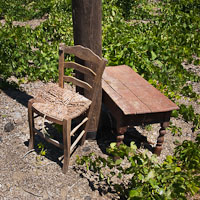 “I’ve never fired a winemaker, they’ve always fired themselves. Every one of them has had their own issues,” said Don Bryant, proprietor of Bryant Family Wines, when I called him up to talk about the recent departure of his winemaker Helen Keplinger, after just a single vintage on the job.

For her part, Keplinger chuckled at the notion of firing herself. “It is interesting to note that over the last 10 years, five winemakers have departed from Bryant – two of them during harvest. It’s clear to me that there is a disconnect”, she said. The roster of winemakers at Bryant Family has included some of Napa’s most famous names, including Helen Turley, Philippe Melka, and Mark Aubert.

Following Keplinger’s departure, Bryant promoted Todd Alexander to winemaker. After less than two years as her assistant (plus several years’ experience assisting at other wineries), this 34-year-old young man will now be head winemaker for one of Napa’s highest scoring and most sought-after wine labels.

It may be slightly unfair to call Bryant Family the poster-child for winemaker turnover in Napa, but it is far from an isolated case.