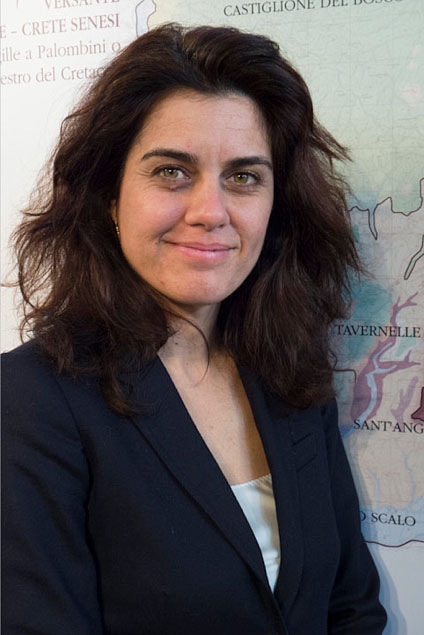 Some stories are just about enough to make you believe in fate.

Fifteen years ago, no one in their right mind would have ever predicted that the young Stella di Campalto would be one of the most exciting new producers of Brunello di Montalcino in the last decade. Being of sound mind, she certainly couldn’t have imagined it herself, especially given the fact that she didn’t drink wine. But luckily for her, and for those of us who love Brunello di Montalcino, she had an aunt who was decidedly not in her right mind.

“My mother’s family is from Florence, and my father’s family is from Torino,” explains di Campalto. “I was married when I was very young, at 19 years old, and moved first to Prague, and then to Milan. After some time in Milan, I was thinking about moving to Rome with my two young daughters when I got a call from my aunt.”

“My aunt is crazy,” di Campalto laughs, “she is a very special person, if you know what I mean. She reads the tarot cards. She called me up and said ‘I just read this article in Modern Woman magazine about how they are giving money to people who want to plant vineyards in Tuscany. You should do it!'”

Di Campalto and her husband, in fact, had some land south of Montalcino thanks to a generous wedding gift from her father-in-law, who had purchased an old farm from the church a few years before. Di Campalto had actually gotten married in a tiny church near Castelnuovo dell’ Abate, not far away.

Mostly to indulge her aunt, “and because it seemed like a fun way to spend some time with her” di Campalto let her aunt sweep her away for the day to the provincial seat in Siena. “It was a complete lark” she adds.

“She picked me up in her bright pink car, and we drove to Siena, where we looked for the office where we could fill out the paperwork, but we couldn’t find it” explains di Campalto. “Finally I saw a man walking down the street, and I told my aunt to stop the car so we could ask him directions.”

“‘NO!’ my aunt shouted, ‘he could be a rapist or something!’ but I insisted. I rolled down the window, and asked him for directions.”

That man turned out to be the regional EU representative himself, the very person that they were on their way to see. He got in the car, and took them to where they needed to go.

With a simple twist of fate, di Campalto was swept up into a new future. A few hours later she walked out of his office with the impossible clutched in her fist: a grant to establish 13.5 acres of vineyards on her small abandoned farm AND the classification of nearly 10 of those acres as Brunello di Montalcino.

Even then, holding in her hand two things that many people would all but kill to possess, di Campalto did not yet understand what fate had in store for her.

“I was thinking this might be a way to make some money,” says di Campalto. “We could rent the vineyards to someone.”

So di Campalto took her kids down to see the farm, known as Podere San Giuseppe, for a week.

“I went down to the house and didn’t find a house,” she explains, describing the ramshackle the old farm house that once belonged to the Biondi Santi family. “there was no electricity, there were holes in the walls, it was crazy.”

Gritting her teeth, she thought she would stay for two days and that would be that. But she never left. “I fell in love with the house, with the country, with the freedom for my children, with the land.”

“Those first three years were the best years of my entire life,” smiles di Campalto. “I fell in love with Montalcino.” She quickly felt at home. Her eldest daughter, always coughing and mildly sick in Milan, became the picture of health.

That year, in 1998, di Campalto planted her vineyards, and thanks to an interest in homeopathic medicine, she opted to farm them organically from the start. A couple of years later, she went to a Nicolas Joly talk, and decided to switch to biodynamics. Consequently, since her land was last cultivated before the second World War, it has never seen the use of petroleum based fertilizers, herbicides, or pesticides.

Once the vineyards had been planted, and despite her newfound love of the Tuscan countryside, di Campalto went looking for someone to rent the vineyards. She found an interested party in Altesino, who drew up a contract to rent the land.

“I was going to sign the paperwork but then my mother told me I should talk to a lawyer,” recalls di Campalto. Thinking that was probably a good idea, she phoned Altesino to let them know she wanted to review things with an attorney. “They said, ‘we’re no longer interested'” says di Campalto, “and I remember feeling so happy. That was when I realized what I wanted to do.”

Di Campalto, who still didn’t drink wine, went to Bordeaux and took sommelier classes and volunteered to work in cellars. She returned to Tuscany and found a friend and mentor in Piero Palmucci, whose Poggio di Sotto estate is her closest neighbor.

With Piero’s help and guidance di Campalto produced her first vintage of wine in 2001, a few hundred bottles of Rosso di Montalcino. Deeply concerned with understanding her land, di Campalto decided that even though it was legal to do so, she would not produce a Brunello di Montalcino until she felt ready. That year was 2004.

Di Campalto has released only three Brunellos since that first vintage, and is about to release her forth, but this young accidental vintner has garnered significant acclaim with only a few of her wines having hit the market. Tasting them, it’s not hard to understand why. Di Campalto’s wines vibrate with energy, and evince the dichotomy between delicacy and power that only the greatest Brunellos can manage convincingly.

As one might expect from a Demeter certified winery, di Campalto works with as little intervention in her underground, gravity-fed cellar as possible, allowing fermentations to occur with ambient yeasts, and utilizing the least amount of sulfur dioxide she can manage. The wines are never fined or filtered, and the first few bottlings were even filled by hand, one by one. Di Campalto proudly asserts that each vintage will always be 100% Sangiovese, and what is in the bottle will always be 100% from the vintage on the label (regulations allow up to 15% of the wine to be from another vintage). The wines age in old oak vats of varying sizes, in the case of the Brunello, for 45 months before bottling.

In the fields, di Campalto and her 5 employees follow the phases of the moon to sow the nearly 25 different seeds that make up the cover crops between her rows and to utilize the various biodynamic preparations that di Campalto makes along with four other biodynamic wineries in Montalcino. A close look at her vineyards will reveal an irrigation system in place but she has never used it (“It was a mistake. I listened to the first person who helped me plant,” she says. “The water is to sulfurous even if I wanted to use it.”) Di Campalto’s current obsession involves reducing the amount of copper she is using in her vineyards. She’s got it down to 700 grams per hectare and wants it to be even less.

I literally stumbled across her wines while at VinItaly this year. I randomly stopped at

her table, never having heard of her before, and was floored by the wines. And that was before I knew her story.

“I want my wines to have authenticity” she says. “I love it when each wine has its own personality. Sometimes they are more closed, sometimes they fight, sometimes they are relaxed. The wine has to be both simple and complex, simple and deep at the same time. This is something I appreciate, in any case. It’s not me doing that, the wines do what they want. Wine is a message from nature, from the soil. It can change you, like music. It can make you happy, or sad, but it must be true. It must always be true.”

She hasn’t been drinking wine for very long, but it seems she’s gotten the gist of it. Stella di Campalto may not have been born to wine, but when it was all but thrust upon her, she rose to the challenge. Should you manage to get your hands on a bottle of her wine, which can be challenging given her tiny 2000 case production, you will not be disappointed.

2009 Stella di Campalto Rosso di Montalcino, Tuscany, Italy
Pale garnet in the glass, this wine smells of cherry and sandalwood and wet earth. In the mouth deep forest floor flavors mix with gorgeous bright berries — cherry and raspberry that have an ethereal sweetness to them that perfectly balances the gorgeous earthy tones of the wine. Soft but firm tannins hover around the edges of the mouth. Delicate and filigreed, the wine has fantastic acidity and wonderful poise. 13.5% alcohol. Score: around 9.5. Cost: $40. click to buy.

2007 Stella di Campalto Brunello di Montalcino, Tuscany, Italy
Pale ruby in color, this wine smells of wet earth, bright cherry and sour cherry fruit. In the mouth, elegant refined tannins wrap around a core of cherry, sandalwood, and wet earth. Fantastic acidity makes this wine juicy even as it is extremely delicate. An aromatic sweetness suffuses the wine and the finish. Fantastic. 13.5% alcohol. Score: between 9 and 9.5. Cost: $100. click to buy.

Imported by Polaner Selections in NY.