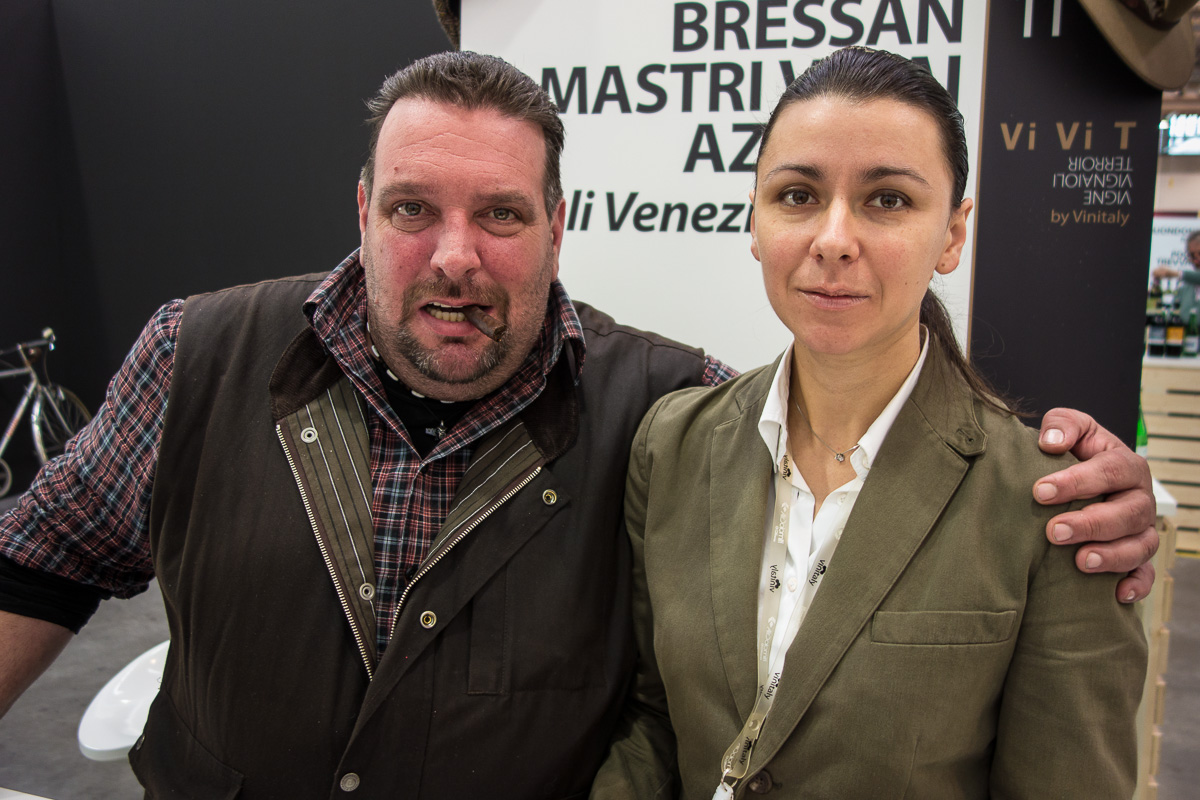 I’m not entirely sure why some of the best wines in the world are made by people who are more than a little crazy, but there are enough wacko winemakers out there to make it clear that the connection between great wine and eccentric iconoclasts is more than mere coincidence.

Even more telling are the number of these “eno savants” (to perhaps coin a phrase) that live in Friuli, in northeast Italy.

Once upon a time, there was no Italy, there was only the river Isonzo, winding its way down out of the Alps towards the Adriatic sea. From the high peaks it looped and loped, laying down beds of granitic gravel to make a sloping country that sprouted many things. Protected from the harsh continental weather by the Alps, and warmed by the humid breezes off the Adriatic, this mild region naturally attracted the various nomadic people that passed through the region, some of whom knew a good thing when they saw it, and settled down.

Some of the earliest settlers of the region were likely Celtic peoples who brought with them not only the skills of cultivating grape vines, but the inventive skills of aging their wines in wooden casks, a technology which surprised and delighted the Greeks and the various other Mediterranean cultures who came to trade in the 4th century B.C.

The region that would eventually become known as Farra d’Isonzo to those who live there, passed through the hands of many an empire before it settled down into the little nook of Italy that it represents today. But throughout the centuries Friuli has always been known for two things: grapes, and people who do things their own way.

Fulvio Bressan represents the 9th generation of winemakers carrying the Bressan name and working a small plot of land in the Farra d’Isonzo since 1726. And given the way he runs his winery, you would think that he might just be channeling all 9 generations of prior expertise, with little care for how the rest of the world might make their wines.

Bressan (shown above with his wife Jelena) makes only two real concessions to modernity: fermenting his wine in stainless steel tanks (sometimes cooled with his own well water), and occasionally adding a little sulfur dioxide at bottling time. Apart from these two acts, Bressan is as old school as you can get, down to the fact that he seems to run the family estate almost single-handedly.

The Bressan recipe for wine is as simple as it is maddeningly extreme.

Take about 45 acres of old vines growing various indigenous varietals, as well as Pinot Noir. Dry farm them with the most extreme methods possible, with no cover crops, to the point that each vine bears only one or two clusters of fruit. Pick after personally tasting every single cluster to make sure it is ripe, then cut off only the shoulders and the most perfect clumps of berries on those clusters and throw them into the tank, leaving the rest to be made into jam or grappa. In years when nature isn’t kind, well, that’s when you don’t make wine.

Ferment the wine for months with only ambient yeasts after a month-long maceration period, letting the wine do its thing as long as necessary in the tanks, including malolactic fermentation after the juice has been pressed off the skins. After this secondary fermentation, transfer the wine to 2000 liter, ancient oak casks, where it receives regular battonage (a process where the particles of yeast that settle to the bottom of the cask, known as lees, are agitated and stirred around in the wine). Fining and filtration are also eschewed. All of the wines are bottled by hand, including a vintage date stamped by hand. Except for when Bressan can’t be bothered.

The wines are released and sold when Bressan damn well pleases, and in minute quantities (as small as 20 to 40 cases for some wines) corresponding to the often depressed yields provided by vineyards that Bressan adamantly refuses to coax into higher yields. In fact, the DOC rules for Friuli now require producers to drop fruit, theoretically in the name of quality. Since Bressan won’t be caught dead doing so, he bottles all his wines under the regional IGT designation, and leaves it at that.

At VinItaly 2013 you could hear and smell Fulvio Bressan before you saw him. With a lit cigar clamped between his teeth and a hearty laugh, he and his wife were surrounded by a crowd of people eager to taste his idiosyncratic wines the first day I passed by his booth.

Not wanting to wade through a crowd, I came by early the following day to find the booth much quieter, and Bressan’s cigar mercifully extinguished, though still clamped firmly in his teeth.

I got the opportunity to speak with his wife Jelena for a while about Bressan’s iconoclastic approach to winemaking. Many of those who style themselves the voices of today’s cutting-edge trends in winemaking would happily claim Bressan for their own. The natural wine movement and the biodynamic wine movements have both attempted to do so.

But Bressan is having none of it, disavowing any such alliance. There’s almost certainly a much more eloquent and probably untranslatable Italian phrase to describe the rat’s ass that Bressan doesn’t give about such winemakers, most of whom he considers to be purveyors of garbage. With cigar in teeth it’s no surprise that he brings to mind the famous Groucho Marx quote “I don’t care to belong to any club that will have me as a member.”

No matter the topic, as long as it is about wine, and Bressan seems to have a vociferous, if not outraged opinion on it. Luckily they are usually delivered with a smile or a twinkle in the eye. Except, of course, when Bressan preemptively threatens the life of anyone who might introduce cultured yeasts into his winery (whose new roof apparently has herbs mixed into the mortar so as to encourage the native yeasts). Don’t mention cultured yeasts.

Larger than life to be sure, with far more passion than politesse, Bressan and his wines share a sense of unvarnished honesty that is refreshing, and even electrifying. The man and his wines are not for everyone, but frankly, that’s just the way he likes it.

Light orange in color, this wine smells like melted creamsicle, orange peel, and chamomile laden with honey. In the mouth juicy herbal flavors of chamomile and orange peel swirl in a beautifully textured package with a nice balance. 13% alcohol. Score: between 8.5 and 9. Cost: $45. click to buy. 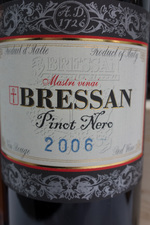 Light garnet in the glass, this wine smells of black olives, sandalwood and deep dried fruit. In the mouth flavors of nicoise olives, cedar and dried cherries are wrapped in a blanket of find grained, supple tannins that seem to leave flavors of dried herbs in their wake. Good acidity, quite savory. 13% alcohol. Score: between 8.5 and 9. Cost: $45. click to buy. 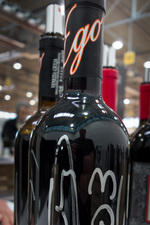 Medium garnet in color, this wine smells of juniper berries, cherries, and cedar boughs. In the mouth, juicy flavors of cherries cedar, leather and earth are dusted with powdery tannins and lively thanks to excellent acidity. The fruity, woody flavors of the wine turn more herbal and take on that juniper herbal quality in the finish. Delicious. A blend of Schioppettino and Cabernet Franc. 13% alcohol. Score: between 9 and 9.5. Cost: $40. click to buy. 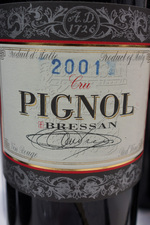 Light ruby in color, this wine smells of cedar, nicoise olives, and herbs. In the mouth flavors of nicoise olives meld beautifully with cherry fruit, cedar, and mulling spices. Suede-like tannins gently buff the tongue as the wine rumbles earthily through a long finish. Great acidity and balance. 13% alcohol. Score: around 9. Cost: $85. click to buy. 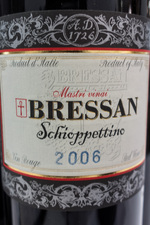 Light to medium ruby in color, this wine smells of mixed herbs, juniper boughs, and tart, sour berries. In the mouth redcurrant and sour cherry fruit mix with freshly crushed green herbs and cedar shavings. Soft, supple tannins add depth and complexity to this intense wine, whose brightness thanks to great acidity is one of its great strengths. 13% alcohol. Score: between 9 and 9.5. Cost: $45. click to buy.