Delectable: The Only Wine App Worth a Damn 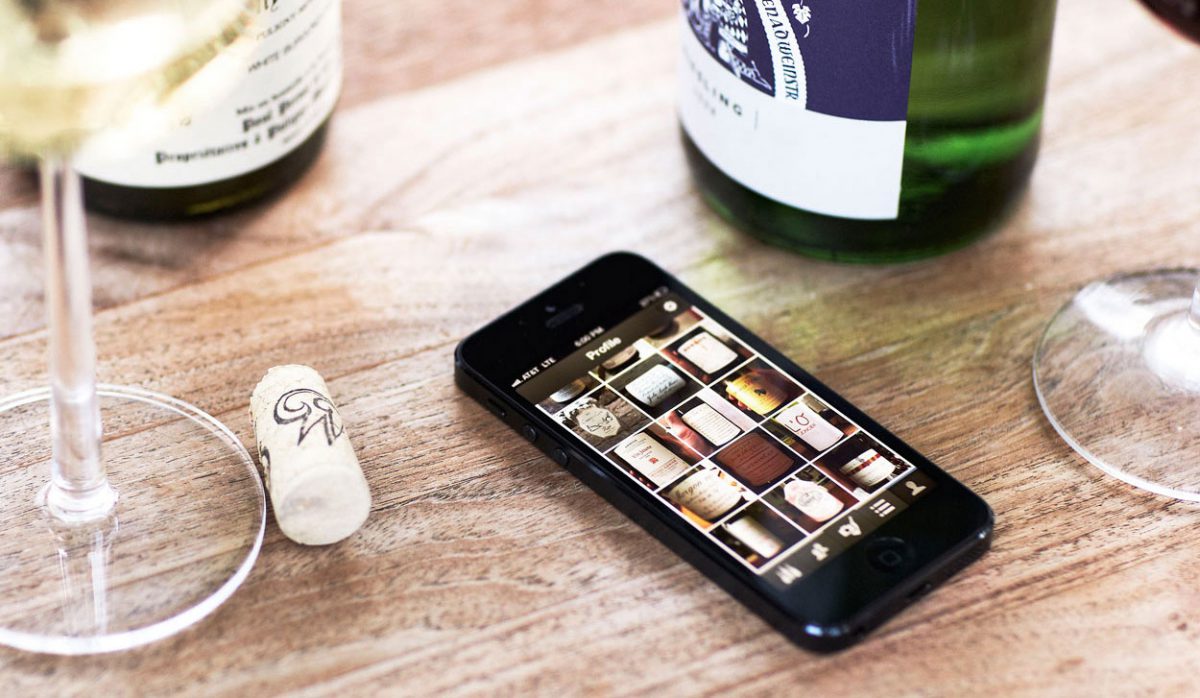 A dismal state of affairs
Ever since the iPhone was first released, I’ve been trying apps that are aimed at wine lovers. For the relatively niche market that wine represents, there have been a surprising number of apps trying to address it. There are maps, buying guides, ratings databases, food and wine pairing, cellar management, e-commerce, wine tasting tools, regional guidebooks, and social networks.

It sounds ridiculous for me to claim that I’ve tried every single wine app that is out there on the market, and it’s probably not true, but let me tell you, I’ve tried most of them. And they’re all crap.

Ninety-eight percent of them either don’t offer to do anything truly useful for wine lovers, or, if they do offer to do something useful, they actually don’t deliver on their promise. For instance what good is a winery tasting room guide and map of Napa that doesn’t have the first five wineries that I search for in their database? How helpful is an app that promises to identify bottles that you take a photo of, but can’t seem to get the identification right two out of five times?

The other two percent of wine apps on the market might — and it is impossible to put too much emphasis on that word ‘might’ — offer some value, but any hope of doing so is immediately destroyed by completely awful design and usability. Yes, your app might actually have some interesting advice to give about pairing wine and food, but when it takes me five minutes to drill down through a horribly designed menu-tree of foodstuffs to find the thing that I’m looking to cook, no matter how good your content is, I hate your app before I get to it.

In short, my professional opinion (and it is worth reminding you that by day I run an interactive design agency that, among other things, designs iPhone applications) is that there is one, and only one wine app that I’ve ever seen that is worth using, and it is called Delectable. Credit given where credit is due, I hadn’t heard about it until Jon Bonné of the San Francisco Chronicle mentioned it to me last year, and he introduced it with much the same sentiment I am sharing right now.

But let me explain why, and how, Delectable has managed to pass the ultimate test that any wine app must face: “Will I actually use this thing regularly?”

A simple proposition
While Delectable is busy building out new features that make a reductionist description of the product somewhat problematic, let’s stick with the basics for now: Delectable is Instagram for wine. At its simplest, Delectable lets me take photos of what I’m drinking and share them with others, and I can follow other people and see what they’re drinking.

But here’s what Delectable does for you that neither of those services do:

1. It identifies the wine for you and keeps you from having to type anything in, and it gets the wine right. Provided you take a photo of the label in such a way that the vintage, producer and wine name are showing (or take a photo where you’re pointing out the wine on a wine list), after a few minutes, Delectable correctly catalogs the wine.

2. It allows you to rate the wine, provided that you’re OK with using the highly sophisticated rating scale of frowny face or smiley face, and make a note about it if you so desire.

3. It lets you discover and follow people in the wine world — winemakers, sommeliers, wine writers, critics, restaurateurs, retailers, and of course, fellow wine lovers — and see what they are drinking.

4. In a few simple clicks, it lets you buy any wine you encounter in the app (logged by you or someone else), provided that it is available for sale online.

The combination of these four functions, plus seamless integration with most major social networks and a nicely designed interface that allows the content to remain the focus, makes Delectable both easy to use and quite useful.

The special sauce
But perhaps most importantly, Delectable provides a perfect porthole to one of our most primal urges: voyeurism. The app is actually fun to use because it lets you see what other people are drinking. And not just your wino friends, but people who live, breathe, sleep, and drink wine all day, every day.

If you’re a serious wine lover, then wouldn’t you want to know what the winemaker of your favorite wine drinks when she’s not drinking her own stuff? What about the superstar sommelier of that fancy restaurant you love so much but can only afford to eat at a couple times per year?

All functionality aside, Delectable is worth using simply because of the people that comprise the application’s current user base. They are the who’s who of the American wine scene, and increasingly, the global wine scene.

In addition to voyeurism, of course, the app also satisfies the need to share, especially for folks like me who are interested in broadcasting my wine adventures to friends and followers alike.

Where it came from
Delectable was founded by Alex Fishman, who spent time at a company named Palantir before starting this new venture. For those unfamiliar with it, Palantir is one of the companies that has helped to define the current focus on Big Data in the high-tech world, and the company makes its millions by doing things with unbelievably huge and complex databases, often for the Defense Department and other portions of our government. Remember after 9/11, when everyone talked about hooking together all those intelligence databases so we could connect the dots and keep terrorists from blowing us up? Yeah, well that’s what Palantir did.

I share that information only by way of suggesting that the data systems that underlie Delectable are probably nothing to sneeze at. Indeed, Fishman claims that he has built, and continues to grow, the world’s largest and most authoritative wine database. Presumably, the only other person around who could really verify that claim is Eric LeVine of Cellartracker, and to my knowledge, he hasn’t yet had the opportunity to look under the hood.

Where it’s going
But entity-relationship diagrams aside, Delectable seems to be building an impressive set of technology services into and around this delightfully simple app. Today the company announced a major partnership with VinTank, makers of VinTank Social Connect, the world’s only wine-industry-specific social monitoring software. As part of this partnership, Delectable data (i.e. who is drinking what, where) will appear in VinTank Social Connect for wineries interested in what consumers are up to, and any winemaker or winery owner with an account in VinTank’s software can, with a few clicks, get set up to use Delectable as an individual user. Which is to say that Delectable just added potentially another 5000 or so winemakers and winery owners to its list of users, and the wine industry just got a way to find out a lot more about who is drinking their wines and when.

Such integrations are probably more interesting to people like me, who spend at least part of our days in the high-tech world of Silicon Valley. But Delectable is busy working on new things that may be of more interest to the average user as well.

For instance, a source inside the company told me that shortly they will begin offering wines for sale through the application that cannot be purchased anywhere else. Apparently Turley Wine Cellars is one of the first partnerships that Delectable has struck in this department and soon users of the app will be able to buy a couple of Turley wines that are only offered to their most loyal mailing list customers, including one wine that even mailing list customers can’t get: their delightfully retro White Zinfandel.

While I couldn’t quite pry out of my source exactly what the mechanism will be for making these wine offers to users, I’m tickled by the idea that they might appear like easter eggs, unlocked after you accomplish some oenological feat like drinking a red, a white, and a rosé in a single day.

Delectable is already selling an incredible amount of wine through their app. The amount was jaw-dropping to me, but the company isn’t quite ready to share it publicly, so you’ll have to trust me when I say it’s a very healthy revenue stream. If they can become a source for wines that are literally unavailable elsewhere, they will have pulled off quite a coup.

In addition to the insights about where the company is headed above, I was also offered a number of additional off-the-record tidbits about what the company has planned. And while I can’t share them here, these initiatives and offerings make it clear that Fishman and team are serious about making Delectable the most useful and well-used mobile application for wine lovers around.

In a nutshell
Is Delectable perfect? Far from it. Despite being well designed, it still contains a few usability flaws, and lacks some basic features that would make it even better.

I’d like to be able to manually enter the vintage for a wine if my photo doesn’t include it. I’d like a rating system that had a little more granularity. I’d like a few Instagram-like filters for the images. Tagging people is quite clumsy in the app as it stands.

But these are fairly minor quibbles. Delectable has gotten the essential things right. At the moment, the user population of the application alone makes it the most interesting wine app on the market. Delectable stands head and shoulders above every other wine app I’ve ever tried, and it has become as much a part of my wine drinking experience as Facebook has become a part of my social experience. The real question will be whether the company can continue to add features while keeping the app experience simple. And that is no simple feat.

If you haven’t given it a try, I highly recommend it. And it will be quite interesting to see how the company continues to fulfill its stated mission which is “to make the world a more delicious place.”

For the record, I have no commercial interest in, nor affiliation with Delectable in any way.