Every budding wine lover faces what can often seem like a daunting mountain to climb. There are so many wines in the world to learn about and experience, it’s not hard to feel overwhelmed. It’s also quite common to feel a certain sense of frustration, the kind characterized by an ambition that far outstrips our own means to fulfill it. Many of the wines that passionate wine lovers wish they could taste are simply out of reach — too rare, too popular, and too expensive.

When I was first starting out in my journey down the roads of wine, the most mysterious and inaccessible wines for me were from Burgundy. My budget allowed for spending $20 to $30 on a bottle, and when it came time to try some French Pinot Noir, that didn’t really (and still doesn’t) go very far. I heard people talk about the magic of Burgundy, listened to them whisper exotic names in hushed tones, and I so desperately wanted to know what they were talking about. But as a twenty-something kid with only so much disposable income, I had no way of unlocking that box.

What I didn’t have for so many years, but so desperately wanted, was an opportunity to taste some of Burgundy’s greatest producers, side-by-side. What I really wanted, twenty years ago, was La Paulée.

Often referred to as the greatest Burgundy tasting held outside of France, La Paulée is an annual event started in 2000 by sommelier Daniel Johnnes in the spirit of an event known as La Paulée de Meursault, which has been held, in some form or another since 1923 in and around the commune of Meursault, just south of Beaune, France.

The French version began as a communal dinner among wine producers, and evolved into its modern incarnation as an extravagant lunch that follows the Hospices de Beaune wine auction every year. This luncheon is really more of a feast of wine that begins in the early afternoon and lasts well into the evening. It is marked by good food and in particular, by incredible old Burgundies brought from the personal cellars of all who attend. I attended in 2010, and can say without question that, apart from my wedding, it was the best party I’ve ever been to.

It was this spirit of conviviality, as well as this passionate consumption of what he considers to be the world’s greatest wines, that prompted Johnnes to hold his own such celebration in New York. In the 14 years since it began, this celebration has evolved into one of the most exciting and sought-after wine events in the world, and in particular, one of the best opportunities for members of the public to taste top Burgundy wines outside of France.

This year, the La Paulée Grand Tasting will be held at the Fairmont Hotel in San Francisco, and for $300, you can taste a lineup of Burgundies that should make any serious wine lover weak in the knees. The list includes some of the region’s best producers, as well as a special selection from the village of Meursault in honor of the commune’s relationship to the event. If you’re not familiar enough with these names to know, trust me when I say that the opportunity to taste these wines is well worth the $275, considering that several of the bottles poured, if you were able to find them at all, would cost you north of $500 apiece.

The Grand Tasting will feature mostly current release wines. But Burgundy is only really good once it has some age on it in my opinion. For those who agree with me, and who are willing to part with a little (OK, a lot) more money, the Gala Dinner following the tasting will be the opportunity to taste older vintages from the producers attending, but also to sample wine brought from the cellars of the many attending wine lovers, in keeping with tradition. That opportunity costs $1500, and is the closest thing you can get in the United States to the real La Paulée event in Meursault.

The Gala dinner is a pretty special event. The food is usually spectacular, and the wines? Well the wines end up being quite remarkable. Even if you’re not willing to roam about the room with your glass looking for an ancient bottle held by a friendly face, the number and variety of wines that will pass through your glass can make your head spin. An embarrassment of riches, to be sure. 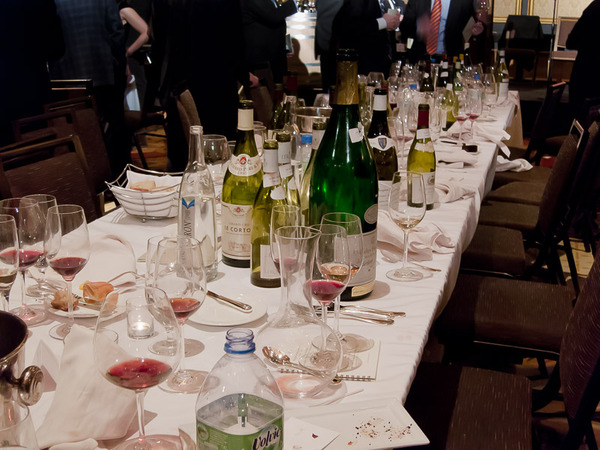 Coming up with the money to attend a tasting like this can be a challenge for many, but it is quite a worthwhile event for anyone seriously looking to educate their palate, or quench an obsession.

For those with more modest budgets, one of the newer and most interesting aspects of the La Paulée event will only set you back $75. Dubbed “Off the Grid: A Tasting of Burgundy’s Hidden Gems,” it involves a walk-around tasting of wines from some of the region’s lesser known village appellations. These wines can be stellar, and this event features selections by sommeliers, as well as food from local restaurants.

No matter what aspect of the event you enjoy, it is put on with care and with class. My own experience attending various aspects of it for the last couple years has demonstrated that Johnnes and his crew really know how to show wine lovers a good time.

Tickets for the Grand Tasting are $300. Tickets for the other events run from $75 to $1500, or more for combination packages. They all can be purchased online, and should be soon, as they are selling out fast.

Learn more about the event on the official web site.

Full disclosure: La Paulée is a paid advertiser on Vinography.