Returning to Chateauneuf-du-Pape For the First Time 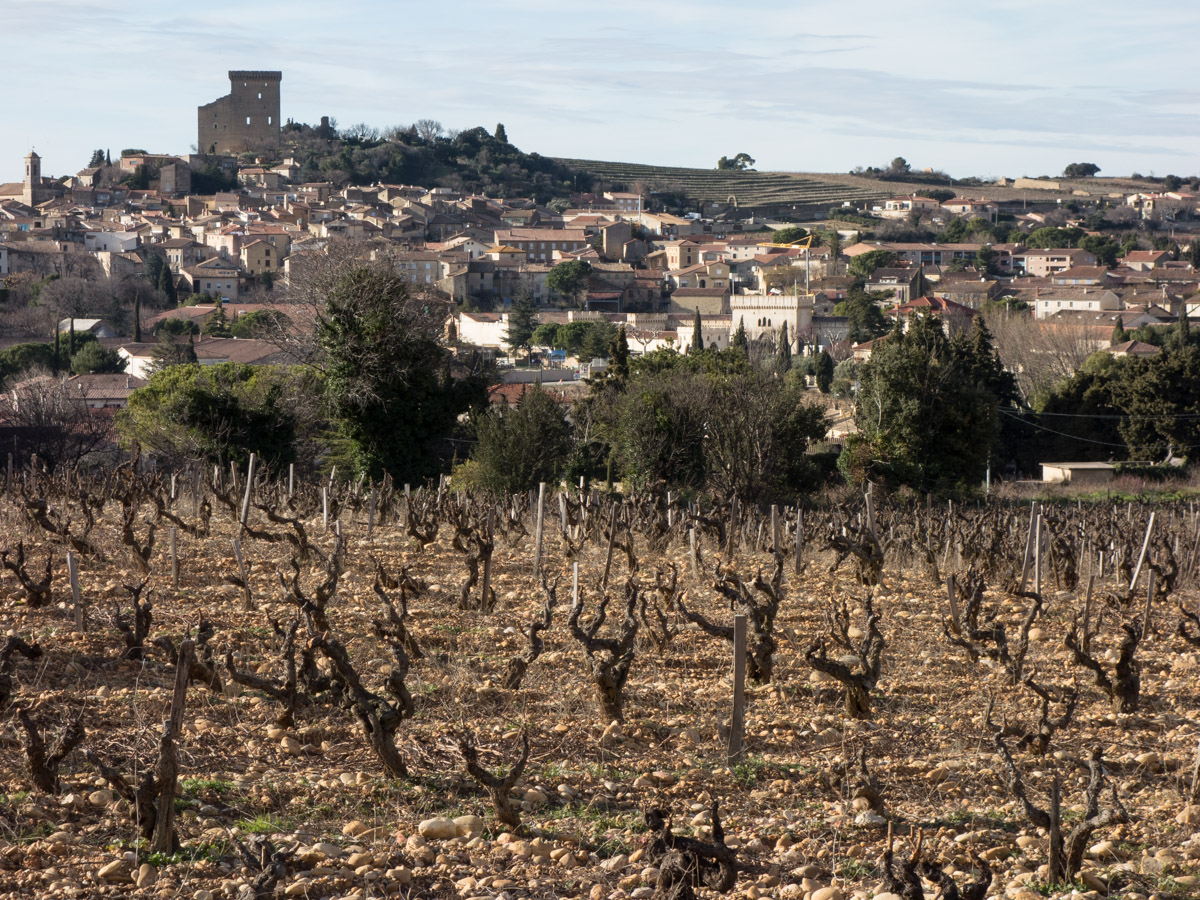 I am in love with Grenache again.

Estrangement from the grape hardly describes the last ten years of my life, in which my consumption probably outpaced your average wine geek. Yet as the furiously working windshield wipers revealed more and more of the rain-soaked banks of the Rhone north of Montpellier a few weeks ago, I found myself thinking about how long it had been since I pulled one of my once-treasured bottles of Châteauneuf-du-Pape out of my cellar.

The honest truth is that, like a man with far too many mistresses, I have been neglecting one of my first loves for newer, shinier playthings. In part, this was the reason that I found myself swishing through the chilly downpour towards a decaying castle on a hill, and looking forward to five days of immersion in a terroir that I had, until this point, only experienced in my glass.

Along with anticipation, however, I harbored more than a sliver of doubt. I wondered whether my personal tastes and preferences, always broadening and diversifying, had moved past Châteauneuf-du-Pape as they had done with Bordeaux, leaving me with an appreciation for a particularly fine example, but a less-than-burning desire to drink as much as possible.

A short time later, the car crested a rise and I caught sight of scraggly winter silhouettes of black clawing their way up through a sea of white cobbles, row after centuried row. Not long after that, the clouds broke, sunlight bathed the legendary plateau of La Crau, and I was swept away by the magic of one of the world’s greatest terroirs. 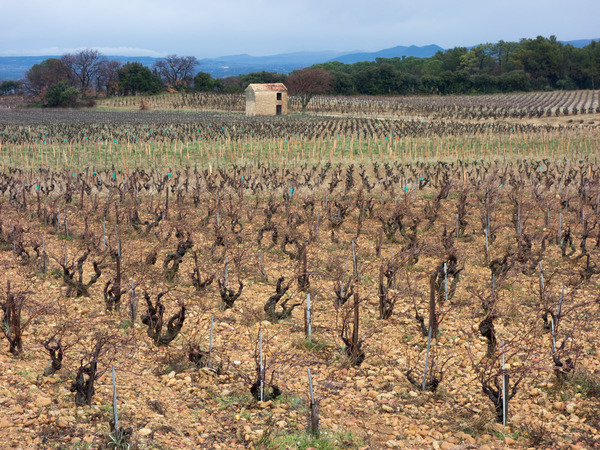 Châteauneuf-du-Pape was France’s first official wine region delimited under the Appellation d’Origine Contrôlée system. Established in 1936, and named after the tiny town near its center, the appellation spreads out in the rough shape of a fattened quotation mark, six miles long and four miles wide, covering an area of 3231 hectares. Literally translated as “the new castle of the pope” for the castle built above the town by Pope Jean XXII, the town is home to some 2000 residents and the appellation hosts some 320 winegrowers.

The AOC regulations for Châteauneuf-du-Pape, in addition to setting the boundaries of the appellation and stating the thirteen permitted grape varieties include the following stipulations:

– A maximum of 3000 vines can be planted per hectare (about 2.4 acres)
– The minimum distance between vines is 2 meters
– All grapes except Syrah must be head-pruned / Gobelet-trained bush vines
– All grapes must be harvested by hand, from vines at least 4 years old
– Irrigation is only permitted in the case of a severe drought
– Only red and white wine can be produced (no rosé allowed)

The appellation is best known for two of its most unique features. The 13 different red and white grape varieties: Grenache, Syrah, Mourvedre, Counoise, Cinsault, Vaccarese, Terret Noir, Clairette, Picpoul, Picardin, Bourboulenc, Muscardin and Roussanne. many of which grow on the remarkablegalets roulés, the fields of grapefruit-sized round stones that have to be seen to be believed. 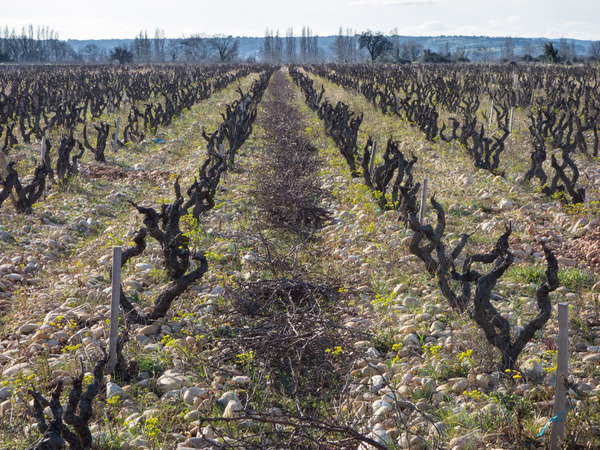 But for all the fame these stones rightfully command, they are but one piece of the Châteauneuf-du-Pape puzzle. One fourth to be exact.

Before visiting, I had been under the mistaken impression that much of the variation in styles between the wines of Châteauneuf-du-Pape was attributable to choices made by winegrowers. Only after spending five days criss-crossing back and forth over the plateau, walking in vineyards and then tasting their wines, did I understand the miracle of geology that is Châteauneuf-du-Pape.

The appellation centers on a roughly east-west plateau that rises to a height of 110 meters above sea level. The lowest bounds of the appellation are approximately 20 meters above sea level. 60 Million years ago, however, the whole region was underwater. During this time, known as the Miocene Epoch, sand and mud were deposited in a relatively even layer across the bottom of the shallow Mediterranean. After the sea receded, the Alps were born, and when their glaciers melted they swept countless tons of pulverized granite down the biggest channel they could find, which happened to be the relatively young Rhone river valley. The journey from the northern Alps to the southern part of France tumbled these mostly granite and quartzite stones perfectly smooth, and when they finally lost momentum they came to rest atop the layers of compressed sand and mud from earlier eras.

Successive periods of glaciation and sedimentation followed, and the Rhone continued to carve its way through the landscape, creating what are really a series of terraces surrounding the highest points of the appellation. These terraces expose the four distinct types of soils that make up Châteauneuf-du-Pape. 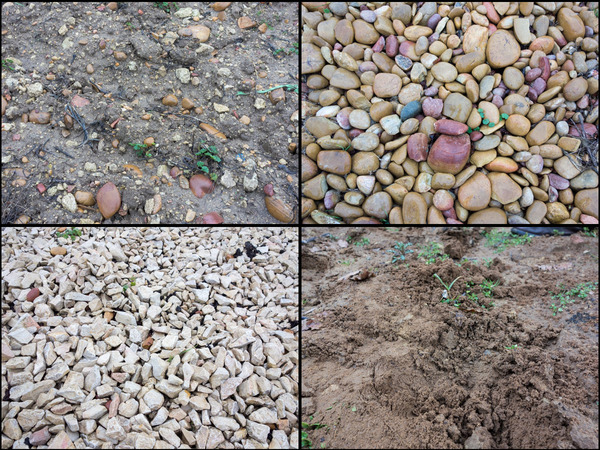 Galets Roulés / Cailloux (River Cobbles)
These round river stones, ranging in size from golf balls to pomelos can lie in deposits up to six feet deep in places. While so plentiful in places that these beds can appear to contain no soil, in fact even the stoniest of vineyards have soil mixed in with the stones, as evidenced by a freshly tilled and replanted vineyard. But after several seasons of rains, the soil works its way down below the surface of the stones, leaving them shiny and almost alien in the sunlight.

Safre (Sand)
On the complete opposite end of the spectrum, some areas of Chateauneuf-du-Pape consist of a soft velvety sand known as safre, which is almost devoid of pebbles, not to mention much organic matter.

Argile (Clay and Pebbles)
The fourth soil type features much smaller rounded pebbles of quartzite and limestone mixed with a combination of sand and clay, almost amounting to a hybrid of the other three soil types.

Though it can be dangerous to directly translate the effects of geology into flavor profiles, these soils, so striking in their differences, genuinely produce different wines. Those grown on deep beds of stones tend to be quite powerful, thanks in part to the light and heat that reflect up off the sometimes unbroken stretches of rock. Wines from the clay soils tend to be rich and fleshy, and those grown on sand have the most delicacy and floral finesse.

If the vineyards of Châteauneuf-du-Pape are striking for what lies under them, the vines themselves are equally as impressive, trained into the grasping finger shapes that stand out so starkly against the stones. Because of the fairly incessant Mistral wind that sweeps across the plateau, the vines are pruned to lean into the wind, their canes arcing solidly towards the north. The oldest vines, of which there are many, thicken and gnarl into shoulders and joints that make them look like arthritic bodybuilders flexing and contorting in the wind. 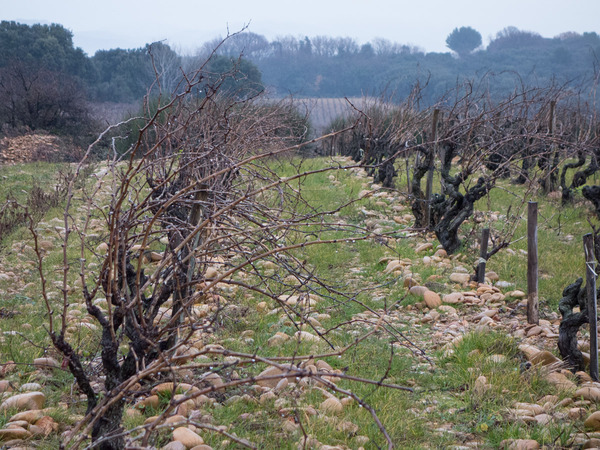 As famous as the region remains, with many superstar estates whose wines are world famous and highly sought-after, Châteauneuf-du-Pape still retains a fairly unvarnished quality. It has its share of grand chateaux whose winemaking traditions go back centuries, but even at many of these estates you will still find the owner out pruning his own vines on a Tuesday morning. Absentee landlords are exceedingly rare, perhaps in part due to the distinct lack of anything resembling economies of scale in this tiny appellation. The rocky soils are exceedingly difficult to work, and the plots are often small. 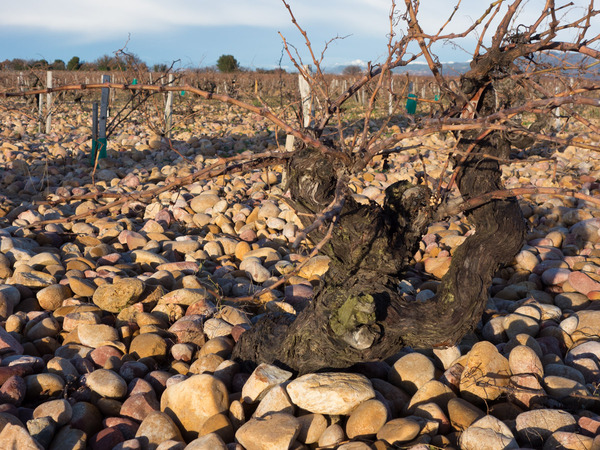 My five days in Châteauneuf-du-Pape left me breathless and smitten. Even setting aside the wines themselves, the landscape itself compels attraction, from the soils to the old vines to the decaying castle, and the majestic peak of the Ventoux rising in the distance.

But of course we also have the wines, the product of this extraordinary landscape. And how they shine. Especially in the 2012 vintage.

Much ado, of course, has been made of the 2010 vintage, and rightly so. It combined an incredible richness and power with a remarkable freshness of acidity that helped many producers achieve wines of a quality they hadn’t seen in decades, not to mention wines that were a bit lower in alcohol than the few vintages that preceded it. The acidity and freshness lessened briefly in 2011, leaving a vintage that while not bad, seems to me somewhat toasted and over-ripe compared to the depth and minerality of 2010.

Then came 2012, and, well…. Be still my beating heart. Its cooler, mild growing season delivered wines that have as much finesse as the 2010s had power. Alcohol levels for these wines fell in some cases more than one percent, resulting in wines that clock in at little more than 14% alcohol compared to an average of around 15% over the past decade. To some, these wines may not have the concentration that they have come to expect from Châteauneuf-du-Pape, but to my palate, they were extraordinary, both for their stunning acidity and their incredible aromatic lift.

To put a finer point on it, these wines blew my mind. I tasted, I swooned, and I fell deeply back in love with Châteauneuf-du-Pape.

The coming weeks will feature reviews from my trip, highlighting some of the extraordinary producers I visited. But you shouldn’t wait. You should go buy as many 2012s as your cellar will fit. 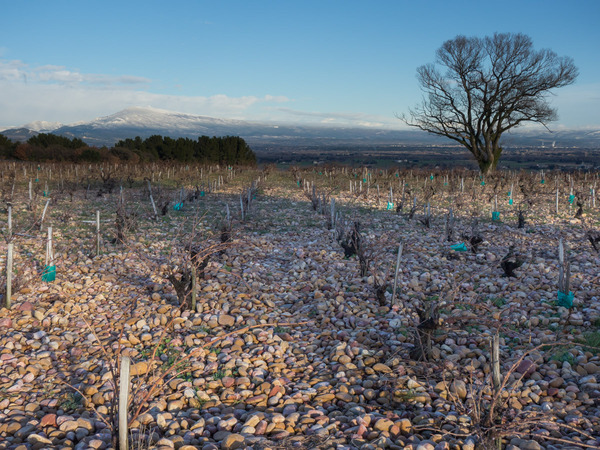