Are You a Red, Pink or a Purple Wine Stater? 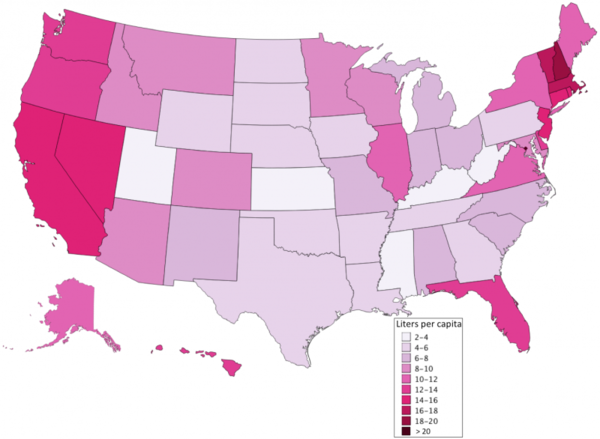 Forget red states and blue states. Let’s talk about wine states. They come in shades of pink and purple, according to a new map published by Business Insider based on a recent study by the Beverage Information Group.

Serious props go to the folks in New Hampshire and Washington, DC for topping the charts at 25.7 liters and 19.6 liters per capita in 2013, respectively.

Of course, that pales in comparison to the reigning champs at the Vatican, who consume a whopping 66.67 liters per capita each year, but everyone has to start somewhere, right?

Wine consumption in the U.S. has been gaining steadily since 2000. In the last 14 years we have increased our domestic consumption by around 20% according to figures from The Wine Institute.

So, what color is your liver? Pink, red or purple? Or are you one of the truly red-livered among us?

Hat tip to Mark DeVere, MW, for pointing me to this story.