The Abbot’s Dinner: A Tale of New Beginnings in Châteauneuf-du-Pape 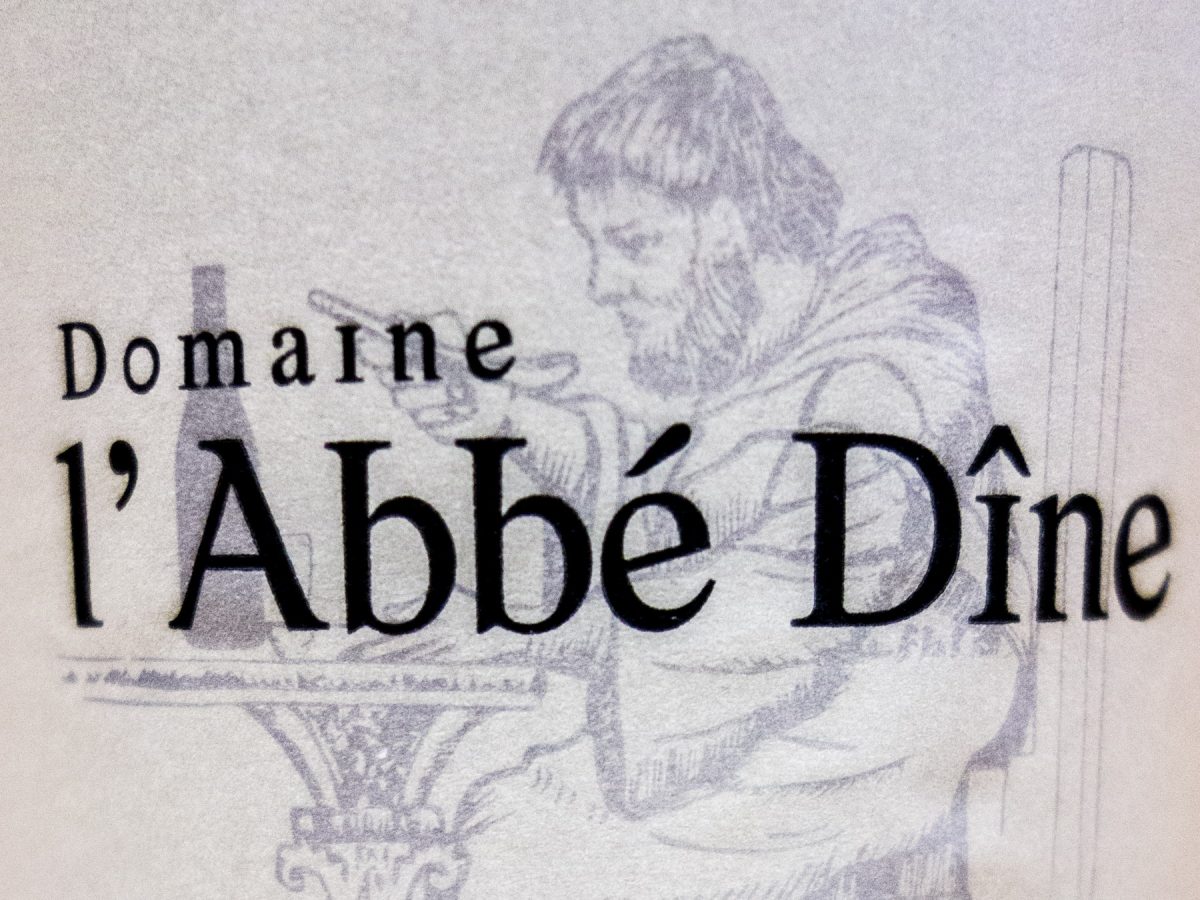 Few things excite me more than getting a peek into the birth of a promising new winery. Especially when such beginnings are humble and hard fought.

I knew I was in for something good when I pulled up in the driveway of Chateauneuf-du-Pape’s newest winery only to find a tin shed on a slightly overgrown lot. We leapt over large puddles in the muddy gravel of the driveway to take shelter under the corrugated metal overhang that shielded the door, and were met by the young and delightfully cheerful Nathalie Reynaud, who sweetly began apologizing (through an interpreter) for everything from the rain to the chilly and drafty mess of her tiny winery to her poor command of English.

When I asked to use the restroom before we started tasting, her eyes got big, and her face reddened with embarrassment. Poor girl. Two minutes into the meeting and I’ve managed to leave her mortified as I head outside to take a leak in her shrubbery.

I never did find out whether there were plans to add a bathroom. I was too busy falling for the guileless charm of a farm girl forging her own way in the world.

The Reynaud family has been farming in Châteauneuf-du-Pape for five generations, and for several decades they have owned a small lieu dit, or vineyard plot, named l’Abbe Dîne (pronounced almost as a single word — “labbedeen”), which means “The Abbot’s Dinner.”

“A long time ago during the religious wars, soldiers came to make sure the local abbot wasn’t celebrating mass,” said Reynaud, “and the story goes that the nuns told the soldiers ‘go away, he’s having his dinner.'”

Or, the plot’s name may have just been bastardized from Les Bedines, which refers to bedines, the smaller red pebbles that are part of the rocky soils of the region.

Either way, Reynaud’s family had long been farming the land for a local cooperative. Reynaud grew up, like many kids in the region, enjoying wine, and feeling like there was an opportunity to do more than just send their grapes off to the local co-op.

“We had good land, for a long time,” said Raynaud. But moving to making their own estate wines wasn’t so easy. Renynaud faced the double challenge of convincing her father to move to bottling their own wines as well as the fact that it should be done by the hand of a daughter, after a long line of fathers and sons.

Reynaud studied estate management and worked at several estates, including Vieux Telegraphe before solidifying her determination to start her own winery. She went back to study winemaking, and worked in vineyards, and to make a little extra money she did some social work.

After scrimping and saving for eight years, in 2012 she and her father purchased the small building and a few tanks, and exercised a contract right to keep 70 percent of her grapes from the 40 acres that her family farms. In five more years, she can get the remaining 30%.

“It was just a question of money,” said Reynaud, by way of explanation for how she convinced her father. “With selling your grapes to the cooperative, you can’t make a living enough for two people on the land we have.”

For help in the cellar, Reynaud asked superstar consultant Philippe Cambie, whose influence in the region is legendary. Reynaud’s husband had worked with Cambie at Clos de Caillou, and thought he would be a good person to help get the fledgling project off the ground.

Cambie has become somewhat famous for tailoring his winemaking advice not only to the terroir that each of his clients has available, but also to their personalities. In the case of l’Abbé Dîne, he and Reynaud settled on a very traditional approach.

“We don’t use any wood,” said Reynaud. “We want to know what the terroir tastes like. Every plot is different and we want to taste it.”

Each parcel of the family’s holdings, the majority of which are on the sandy soils of the region, are vinified separately, as are the different grapes (though they mostly grow Grenache). Fermentation takes place in steel, and aging in cement before bottling.

Several of the family’s vineyards are outside the Châteauneuf-du-Pape appellation, so the domaine also makes a few Côtes-du-Rhône wines as well.

Reynaud’s shyness faded a bit as we settled in to tasting her first couple of vintages and it became clear that I was enjoying the wines. The fact that most of her vines are in sandy soils comes through the wines in a bright floral intensity that is quite charming.

If Reynaud was a little shy, her father was even more reticent, fidgeting with a silent geniality in the background, as if quite out of his element, but pleased as punch to see both his first vintage, and his daughter’s handiwork shown to the world.

And he should be proud. These first releases suggest many more good things to come from l’Abbé Dîne. 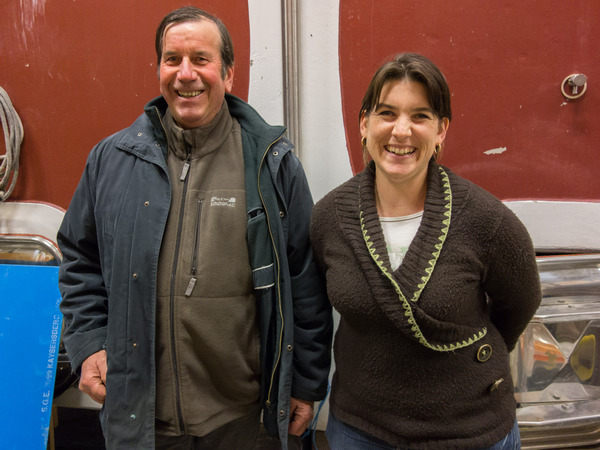 TASTING NOTES:
It’s not clear which wines will be brought into the US besides the Châteauneuf-du-Pape, which I believe will retail for $65 or so once it arrives. I don’t know who the importer will be, so those interested in these wines may have to be a little patient.

2013 l’Abbé Dîne Rosé, Vin de Pays de Vacluse, France
Pale coppery pink in the glass, this wine smells of bright orange peel and red berries. In the mouth, bright flavors of orange peel and red berries turn bitter towards the finish. Crisp and bright but somewhat angular. Still, quite tasty. 60% Mourvedre, 40% Caladoc (a cross between Grenache and Malbec). 14% alcohol. Score: between 8.5 and 9.

2013 l’Abbé Dîne Côtes du Rhône Blanc, France
Palest greenish gold in color, this wine smells of crisp fuji apples. In the mouth it has a touch of sweetness to it that makes the pure apple flavors quite charming. A hint of 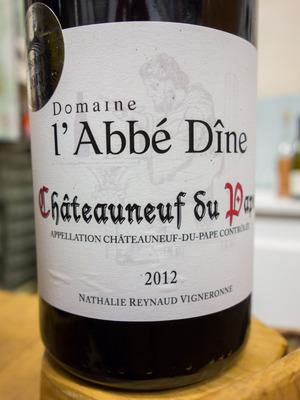 bitterness enters the finish that makes the wine slightly out of joint, but it has been bottled quite recently so this may smooth out over time. Made from 100% Clairette. 13% alcohol. Score: around 8.5.

2013 l’Abbé Dîne White Blend, Chateauneuf-du-Pape, France
Light gold in the glass with a hint of green this wine smells of crisp apples and a hint of exotic citrus. In the mouth the wine has a light sweetness to it with apple and pear flavors mixed with a nice white floral character. A bitterness creeps into the finish, but not to the point of distraction. 50% of the wine is fermented and aged in wood. A blend of 98% Grenache, and the rest being Bourboulenc, Clairette, and Roussanne. 15% alcohol. Score: between 8.5 and 9.

2012 l’Abbé Dîne Côtes du Rhône, France
Dark garnet in the glass, this wine smells of mulberry and crushed green herbs. In the mouth, beautifully crisp and bright mulberry and black cherry flavors have a wonderful freshness thanks to excellent acidity and great minerality. 80% Grenache, 18% Syrah, and 2% Mourvedre grown on sandy soil. 14% alcohol. Score: around 9.

2012 l’Abbé Dîne Côtes du Rhône Villages, France
Dark garnet in color, this wine smells of garrigue, violets, and blueberries. In the mouth blueberries, cassis, and black cherry fruit flavors have a nice bright minerality to them along with a hint of underlying earthiness. Good acidity and long finish. A blend of 80% Grenache and 20% Mourvedre grown on the round stones of the region with vines at an average age of 60 years.14.5% alcohol. Score: around 9.

2012 l’Abbé Dîne Red Blend, Châteauneuf-du-Pape, France
Dark garnet in the glass, this wine smells of beautifully floral mulberry and black raspberry fruit mixed with a bit of garrigue. In the mouth the wine has a bright mulberry and black cherry character that is very delicate and floral, wrapped in light powdery tannins and a cocoa powder earthiness. Elegant and quite beautiful, with excellent acidity and a hint of bitterness in the finish. 90% Grenache (from 120 year-old vines grown on sand), 9% Syrah, 1% Mourvedre.15% alcohol. Score: around 9.