California is by most measures, the eighth largest economy in the world. And of the state’s $2.05 Trillion domestic production, wine makes up more than $51 Billion, or about 2.5% of the economy.

As we might expect, the California state legislature, therefore, pays some serious attention to the wine industry. Occasionally they do quite well by the industry. Such as the recent and incredibly sensible bill that would allow students who are not yet of drinking age, but who are enrolled in wine studies classes to actually taste wine without fear of arrest for them or criminal charges for their universities. It’s hard to argue with the logic of that.

But then there are times that you are left scratching your head and wondering what in the hell the folks in Sacramento could be thinking.

Witness this summer’s complete fiasco with Proposition 65. This proposition, officially known as “The Safe Drinking Water and Toxic Enforcement Act of 1986” has one main implication for California citizens. It forces the state government to publish a list of chemicals known to cause cancer or harm fetuses, and also forces all facilities who use, store, or sell those substances to post public notices that they are harmful.

Perhaps you’ve seen one of these at your local gas station?

That’s all fine and dandy when we’re talking about gasoline vapors or toxic chemicals right?

Well, it turns out that one of the substances known to cause cancer or “reproductive harm” in the State of California happens to be alcohol.

And that means, according to the law, that every business or person “who manufactures, produces, assembles, processes, handles, distributes, stores, sells, or otherwise transfers a consumer product” containing alcohol is LEGALLY REQUIRED to post the following sign at a size of no smaller than 5 inches by 5 inches by every point of sale: 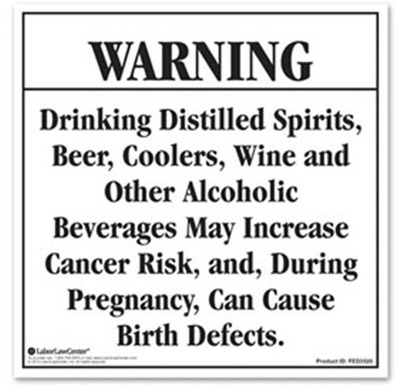 This means that every restaurant, every retailer, every tasting room, every winery, every warehouse, every distribution center, any place that is involved with the sale of wine needs to have these notices posted.

You see, you might imagine, if you were an eminently logical person, that had a restaurant or liquor store failed to post this legally required warning, they might be penalized by the state.

But in fact the retailers aren’t on the hook for the penalty, THE PRODUCER IS. Yes, you heard that right. If your local wine shop sells you a bottle and they are found to not have their prop 65 sign up at the right size, in the right place, whoever made that bottle of wine can get sued or fined (if they have more than 10 employees).

Some idiot actually designed the law this way, thinking that the best people to put on the hook for violations were the manufacturers of those horribly dangerous substances from which the law is designed to protect us.

Needless to say, the California wine industry wasn’t too happy about this when a lawsuit filed this summer brought the whole situation of liability to light.

Various industry bodies managed to negotiate a court judgment that all wine producers can opt into, but they must pay a fee to do so (based on the size of their production). If they don’t opt in and don’t pay the fee, they remain liable for any and all lawsuits filed because retailers fail to post the proper signs.

The kicker to all of this? Because Proposition 65 was a ballot proposition, the state government can’t actually amend the law to have it make more sense.

It’s enough to drive you to drink.