Does California Have Too Many AVAs? 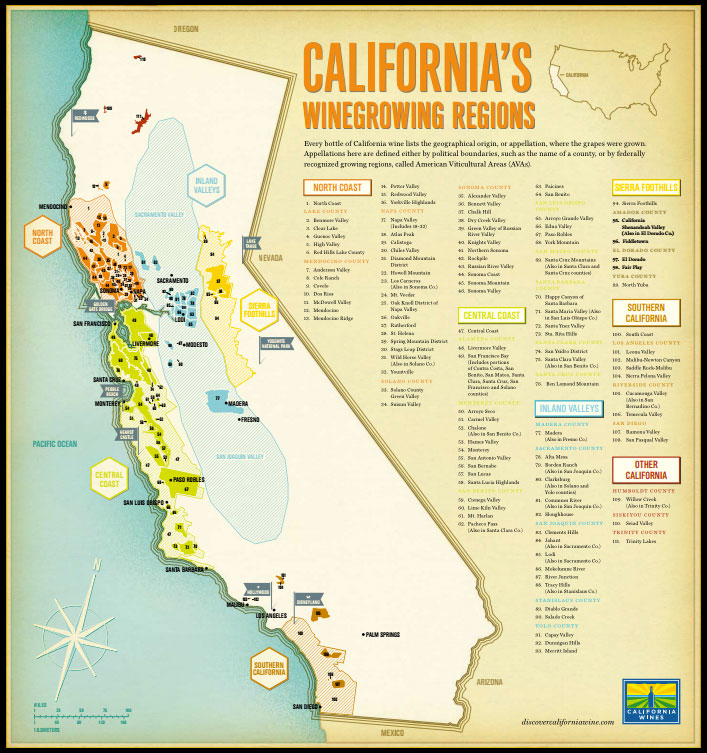 , which came just days after the announcement that the Paso Robles region had been subdivided into eleven new AVAs, he made the definitive claim that California has too many AVAs.

I’m in complete agreement. But I also think the state needs a few more.

The problem with AVAs, as Blake points out, seems to be how they are established. For those unfamiliar with the process, it merely involves petitioning the government bureau in charge of the process (The Alcohol Tobacco Trade and Tax Bureau — TTB for short), with enough documentation for your case, and then not having the idea shot down during the “comment period” where the agency solicits public comments on the proposed AVA.

This process has yielded some monstrosities of AVAs, such as Paso Robles, whose geologies and microclimates were so varied that the name Paso Robles on the label up until recently guaranteed only roughly what latitude the wine was made in, give or take a couple of degrees.

The region clearly needed to have a couple of unique sections separated out into their own AVAs. I’m not sure, however, that it needed eleven of them.

And that’s a perfect illustration of the problem. On the one hand, Paso Robles needed some subdividing. On the other hand, we probably now have too many subsections. This is true all over California. In some places we have huge swaths of vineyard land that is grossly lumped into a single area irrespective of its relative geological or climatological similarity (until recently the Sonoma Coast was the best example such a monstrosity). In other places we have relatively small geographic areas diced so fine as to be somewhat bewildering to all but the most fastidious wine geeks.

The main impetus behind the proliferation of AVAs can be traced back to wineries, all of whom want some way to distinguish themselves from their brethren. They’re hardly to be blamed for this tendency. Study after study has shown that consumers not only believe that geographically designated wines are better, they actually enjoy them more. In one famous experiment, wine drinkers were shown the same wine, labeled “California” in one instance and labeled “Napa Valley, California” in another instance and the FMRI machine into which they were put while drinking this wine definitively recorded the pleasure centers of their brains responding more strongly to the wine they thought was from Napa.

Unfortunately the researchers didn’t repeat the experiment with Redwood Valley, Mount Harlan, or some of California’s more obscure AVAs, but they hardly needed to. Wine consumers in this country have come to believe in the value of geographic designation, even if that geographic designation has no basis in geology, climate, watershed, elevation, or any of the characteristics that clearly distinguish grape growing regions from one another.

There are a bunch of AVAs in the state that exist because some big winery wanted to have an AVA to put on their label. As Blake points out in his piece, the Seiad Valley AVA was apparently established at the petition of a single winery that is no longer in business. Who knows if anyone will ever see that name on a label? (There’s not a single wine logged in Cellartracker with that AVA).

But then there are some AVAs, like Paso Robles, that definitely need(ed) to be carved up a bit. The Sonoma Coast is gradually getting the subdivisions it needs. The Santa Cruz Mountains could use a division between the very fog-influenced cooler sites that grow Pinot Noir and Chardonnay and the much warmer sections that easily grow Cabernet Sauvignon.

Unfortunately, as long as the AVA game involves a government bureaucracy that has no real stake in either the quality of the wine nor the understanding of the consumer, we’re not likely to see a solution to the California AVA mess anytime soon.