It’s that time of year. When I introduce my newest photography collaborator here on Vinography, who will bring you stunning wine related images every Friday for the next year.

For some of you photographer George Rose needs no introduction. You might be staring at his photos as your desktop background or screen saver already, since I’ve featured his images a couple of times over the last few years.

For those of you who haven’t met George, he’s an accomplished wine marketer in addition to a master behind the lens.

As a photographer George Rose traveled a long and winding road through the elite world of popular music, film and sports — eventually leading him to Northern California’s Wine 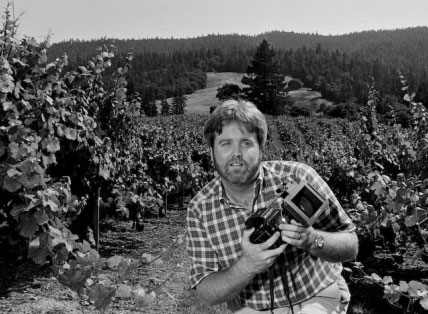 Country. During a prolific 17-year career as a photojournalist in Los Angeles in the ’70s and ’80s, Rose developed a remarkable and historic body of photographic work focused on popular culture.

In the 1980s, Rose headed north to Ukiah, where he owned and published the Mendocino Grapevine, an award-winning Northern California weekly county newspaper. It was during this period that he became friendly with the Fetzer family (owners of Fetzer Vineyards), planting the seeds of a future career in wine. Despite the rigors of publishing, Rose maintained his close relationship with USA Today and a handful of other national publications throughout the 1980s.

For the past twenty years, Rose has held five high-level public relations positions in Northern California’s Wine Country. He began his wine journey — though some might call it a “career detour” — by becoming Director of Public Relations at Mendocino County’s Fetzer Vineyards in 1991. In 1998 he moved forty-five minutes down Highway 101 to Sonoma County, where he took on duties as Public Relations Director for Clos du Bois and its parent wine company, Allied Domecq Wines USA.

In 2003, the late Jess Jackson tapped Rose to become Vice President of Public Relations for Kendall-Jackson, America’s top premium wine producer. Rose was responsible for all Kendall-Jackson communications until his departure at the end of 2008. He spent time as Communications Director at J Vineyards & Winery before returning to his work as a photographer.

George continues to document the seasonal changes in California’s wine country and travels the world as a contributor to Getty Images. His vineyard photos have been used in numerous publications and calendars throughout the world of wine, and in 2007, Chronicle Books published a collection of those images in a book entitled The Art of Terroir

. His most recent work is a book produced in conjunction with the Wine Institute entitled Down To Earth: A Seasonal Tour of Sustainable Winegrowing in California.

Please join me in welcoming George back to Vinography. I hope you enjoy his images as much as I do.