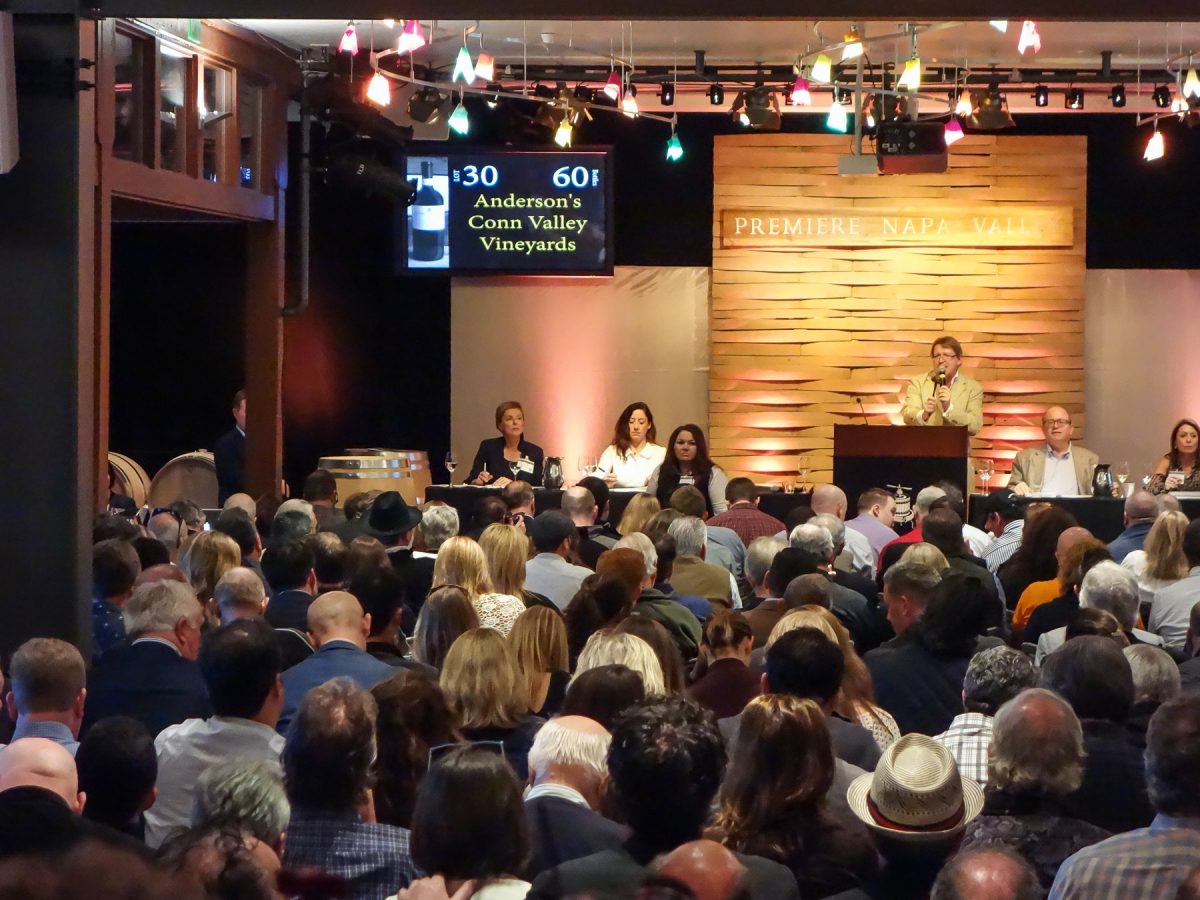 Each year, the Napa Valley Vintners Association pulls out all the stops to host its annual fundraising event known as Premiere Napa Valley. Not to be confused with its star-studded charity auction in the spring (known as Auction Napa Valley), Premiere Napa Valley is a more focused event. All the bidders are ostensibly in the wine trade (retailers, distributors, etc.), while other attendees include the media and winery staff, and the proceeds from the auction of 225 unique lots of wine go to help fund the Vintners Association.

The auction action at Premiere always serves as something of a barometer for California wine, measuring both the strength of the Napa brand in the marketplace, as well as the interest in the upper echelon of fine wine (many auction lots sell for well over $2000 per bottle).

Last Saturday, the Vintners raised a record $6 million dollars at the auction, suggesting that times are indeed good for fine wine in general, and Napa in particular. This total was just slightly higher than last year’s $5.9 million haul, which had blown the previous record of $3.1 Million in 2012 out of the water.

The event is good fun, and represents quite a collection of Napa wine celebrity, but for me Premiere has an entirely different purpose. Each of the 225 auction lots usually represents something approximating the best possible wine that the winery can make in the vintage. Many wineries select their very best barrel, or make a unique blend specifically for the auction. All of these wines are available for tasting as barrel samples prior to the auction, and consequently offer a unique window into the pinnacle of quality for that particular vintage.

Every year, I attend Premiere with the goal of tasting as many of these wines as I can in the effort to get a bead on the vintage as a whole in Napa.

In the case of last weekend’s event, the vintage in question was 2013, which by almost every account was one of the highest quality, most successful harvests in decades. Only slightly smaller than the bountiful 2012 harvest, the 2013 harvest also saw just slightly cooler temperatures heading into harvest, which led (as a slightly dangerous, sweeping generalization) to slightly higher acidity levels than 2012. 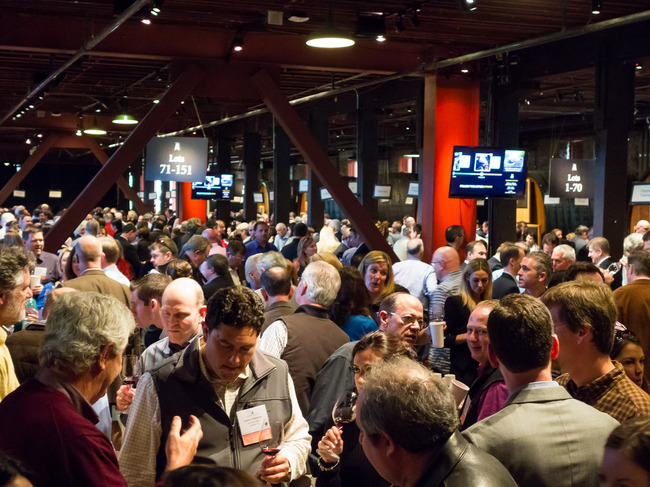 So what does the best of 2013 Napa Cabernet taste like? In a word, glorious. While I happened to love the cooler flavors and lower alcohols of 2010 as well as 2011 (for those who avoided the dreaded over-green pyrazines of that rain-soaked harvest), there’s no denying that 2013 provided truly superior growing conditions across the board. The most successful wines have an incredible brightness thanks to super-juicy acidity, and their tannic structures are wonderfully fine and smooth.

Tasting this year’s barrel samples, in addition to the extremely high quality of the wines I was struck by something different than in previous years. I don’t entirely know what to make of it. Almost none of the wines had extremely overt oak signatures. Now these are generally young wines with a good 8 to 12 months or more left of barrel aging to go, in which they will undoubtedly pick up some more oak, but in past years of tasting the presence of oak has been a much greater element in the profile of Premiere auction lots, at least to my palate.

Several plausible explanations exist for this situation. As exciting as it might be to contemplate a backing off on the use of new French oak in Napa (something I believe would improve most of the wines made in the valley) I find it hard to believe that some sort of wholesale change is taking place in the oak aging regimes of Napa wineries. More likely would be a more concerted effort on the part of the wineries involved to select second- or third-use barrels for their auction lots this year. But even that notion approaches too closely a level of oenological conspiracy that I don’t think possible in Napa.

The most plausible explanation I can think of, one which nicely adheres to the principle of Occam’s Razor, may be simply that this vintage’s qualities deal with oak better than ever — the combined acidity, phenolics, tannins and fruit have made for a wine that subsumes its wood better than most.

Whatever the reason, the wines are tremendous, and to the extent that they presage the quality of 2013s across the board, we are looking at one hell of a year.

Here are my tasting notes for everything I tasted (I did not get to try every wine). Note that anyone interested in getting ahold of the wines below can discover their availability through Premiere Napa Wines, a web site designed to connect successful bidders with consumers who may want to purchase the wines.

WINES WITH A SCORE AROUND 10

1989 Schramsberg Vineyards “J. Schram Late Disgorged” Sparkling Wine, Napa Valley
Medium gold in color with faint, fine bubbles, this wine has an incredible salty brioche aroma mixed with a breath of sea air. In the mouth, a stunning soft mousse delivers faintly sweet and salty flavors of biscuits and seawater and lemon shortbread. Totally outstanding and a triumph of aging. Please sir, can I have another?

2013 PATEL Cabernet Sauvignon, Rutherford
This wine wafts gorgeously floral and pure berry out of the glass. In the mouth it is bright and very, very juicy, soaring with cherry and forest berries for a long time across the palate. Fantastic acidity. Faint athletic tannins. Incredibly light on its feet. Stunning.

2013 Davies Vineyards “Jack & Jamie’s Blocks” Cabernet Sauvignon, Diamond Mountain District
This wine presents a phenomenally crystalline aspect with stony cherry aromas on the nose and then equally bright crystalline fruit on the palate. As if someone squeezed cherry juice through quartz. Pure and long and shot through with fine-grained tannins.

2013 Continuum Estate “Proprietary Blend” Red Wine, Napa Valley
This is certainly the best mouthful of Continuum I’ve had. Juicy and bright cherry fruit is bedded down in voluminous, velvety tannins that give way to a deep earthy aspect in the wine. Fantastic acidity, great length.

2013 Bello Family Vineyards Cabernet Sauvignon, Rutherford
This wine smells like the most archetypal essence of cherry, carrying a purity that is quite stunning. In the mouth, wonderfully bright and juicy, pure cherry fruit is clasped firmly in tight, taut tannins, even as it bursts with fantastic acidity. With time this wine will blossom beautifully.

2013 Stony Hill Vineyard Cabernet Sauvignon, Napa Valley
This wine has been made in a fantastic claret style, and bursts with a deep mineral and berry purity of fruit thanks to exceptional acidity. Fine powdery tannins dust the palate, and linger through a very long finish.

2013 Spottswoode Estate Vineyard & Winery Cabernet Sauvignon, St. Helena
This is a gorgeous, serious wine. It is showing more oak than usual in its current youth, but the boisterous cherry and cola notes beg forgiveness quite well. Excellent acidity and length.

2013 Memento Mori “RTL” Cabernet Sauvignon, Oakville
Gorgeous, plush tannins wrap around a core of cherry cola that is lovely and deep. That deepness of fruit is matched with a deeper earthy rumble that plays a wonderful bass clef to the tenor of pure fruit. Excellent acidity.

2013 Paul Hobbs “Nathan Coombs Estate” Cabernet Sauvignon, Coombsville
This gorgeous wine took me a little by surprise with its dark, juicy cherry and fantastic acidity without a trace of oak. Powdery tannins counterpoint the juicy fruit notes that linger in the finish.

2013 Tournesol Cabernet Sauvignon, Coombsville
Wonderfully juicy fruit of cherry and plum strut about proudly wrapped in a gown of velvet tannins that trail out behind the fruit long and rippling. Great acidity.

1997 Domaine Chandon “Vintage Brut” Sparkling Wine, Napa Valley
OK, so I’m a sucker for aging on the lees. Beautifully fine bubbles through a golden hue smell of yeasty crackers and sea air. In the mouth fantastically fresh brioche and seawater flavors have a wet chalkboard lemon zest freshness that lingers for a long time in the finish. Gorgeous.

2013 Seavey Vineyard Cabernet Sauvignon, Napa Valley
This wine is mouthwatering before you even put your lips to the glass. Super juicy cherry cola leaps out of the glass, and when it finally hits your palate, it delivers everything it promised. Juicy cherry, cedar, and cola notes linger for a long time under a gauzy haze of tannin. Outstanding acidity and a great finish.

2013 Gemstone Vineyard “Fantastic Four” Red Wine, Yountville
Smells of cocoa, cassis, and cherry. Super smooth, seamless cherry and boysenberry on the palate. Very smooth tannins. Certainly the best this wine has tasted to me in years.

2013 Terra Valentine “Crown Jewel” Cabernet Sauvignon, Spring Mountain District
Juicy and deep cherry fruit is quite pure, though it is wrapped in thick tannins. Hint of cedar on the long finish.

WINES WITH A SCORE AROUND 9

WINES WITH A SCORE AROUND 8.5 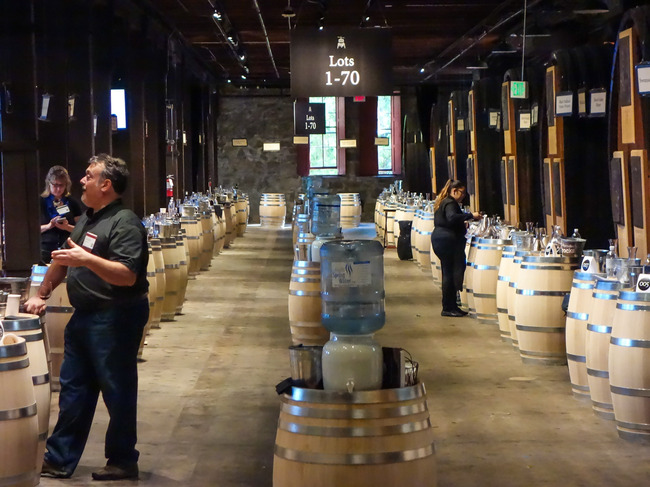