At some point in that process you need to get all the bottles pointed down so that the leftover particles of yeast slowly accumulate in the neck of the bottle. To help the yeast slowly slide into place, you usually rotate the bottle 90 degrees every day or two while gradually increasing the angle of the bottle until it is nearly vertical. This process of getting the yeast into the neck of the bottle is called riddling. It can be done by hand in racks of individual bottles, or as is increasingly common, with a fancy machine known as a gyropalette:

Once the yeast is in the neck of the bottle it looks like this: 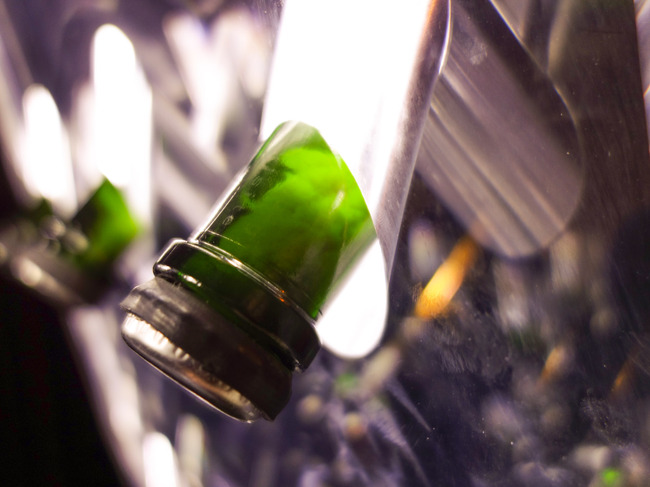 And then you need to get it out. Getting it out of the bottle is called disgorgement, and these days it is usually done through a fairly complicated automated assembly line, which happened to be running at one of the wineries I visited last week. So here’s a brief lesson in automated disgorgement.

First, the neck of the bottle gets frozen using a super-cooled liquid:

Then the bottles get moved into position for disgorgement:

They get lifted up by the neck and their crown caps are pulled off. The pressure inside shoots out the frozen yeast plug.

Then the bottles are topped up with the liquor de dosage, which is usually a combination of sugar and older vintage wine:

Then the bottles are corked and capped with their wire cages, and briefly inverted to mix the dosage liquid and the rest of the wine:

Finally, the bottles are placed into large metal bins where they will rest for at least a month before they are labeled and sold:

All in an afternoon’s work!