The American Viticultural Area system that defines the legal geographic origins and labeling restrictions for American wine is, like all such political constructions, deeply flawed. The process of creating an AVA can just as easily be driven by money as it can genuine viticultural differences. But that doesn’t mean AVAs have no value, nor does it mean that sometimes new ones aren’t a very good idea.

Take, for instance, the Petaluma Gap. Winegrowers have long used the name to refer to the south easterly sloping valley that leans down to where the Petaluma river slips into the San Francisco Bay. It is so called because it is a wind gap — a valley that cuts through hills deep enough to allow weather to move through it.

At the moment the area that is casually referred to as the Petaluma Gap is subsumed into the larger Sonoma Coast AVA, which represents one of the worst examples of meaningless political constructions. This sprawling AVA is mostly non-coastal and contains wildly different sub-climates and topographies. Efforts are currently being made to sub-divide it and the latest is a petition by a number of winegrowers to create a Petaluma Gap AVA. 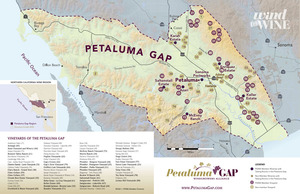 To that end, we now have an organization called the Petaluma Gap Winegrowers Association, and they’re giving you an opportunity to taste what they’re all about. As a way of building awareness for their AVA petition, not to mention for the set of Sonoma County wineries closest to the city of San Francisco, they’re throwing the first annual Wind to Wine Festival on August 8th.

Held at the Sheraton Hotel in Petaluma, the event will feature a seminar on the region followed by a grand tasting of dozens of wineries that produce wine in the region. Anyone especially enthusiastic can also join a winemaker dinner the night before at Keller Estate winery or McEvoy Ranch.

In all likelihood this will be a high quality, intimate wine tasting event, and a lot of fun. If you’re unfamiliar with the charms of the region and what it can do for Pinot Noir in particular, this is a perfect opportunity to educate yourself with pleasure.

Tickets run $95 for the grand tasting event, or $150 for a VIP ticket that gets you access to the seminar and early access to the tasting. The winemaker dinners are $95 as well. You can purchase tickets online at the event web site.

If you’re going to drive make sure to have a designated driver, or stay overnight at the hotel!