Warm Up: The Evolution of Chianti

Chianti wine has been a part of the Italian wine story for at least 800 years, and early mentions refer to white wine. In 1394, the idea of a “Chianti” as zone was further buttressed by the League of Chianti. The League was originally organized as a defensive militia that would protect the Florentine State, but when fighting with Sienna fizzled out, the League changed its focus to enhancing viticulture in the region.

Later in 1716, toward the end of Cosimo Medici III’s volatile and fairly dramatic reign as Grand Duke of Tuscany, he declared a Chianti wine region that extended from Radda to Greve.

Historic records seem to indicate that in the 1700s and 1800s, Canaiolo was the main grape of Chianti, with smaller amounts of Sangiovese and other varieties used for blending.

The subsequent shift towards Sangiovese, which is the hallmark of Chianti today, can be found in the ideas of Baron Bettino Ricasoli. Ricasoli was an interesting fellow who took on the burdens of his estate when he was orphaned at age 18. Not only did he raise his younger siblings, but he systematically and frugally turned his late parent’s estate from disorganized into a profitable estate. Perhaps this huge responsibility at such a young age is what led him to approach his political career with similar prudence, dedication, and integrity. He also carried out wine experiments, and in 1872, Ricasoli penned his famous “recipe” for Chianti, in a letter to a professor at the University of Pisa. He wrote:

“..I verified the results of the early experiments, that is, that the wine receives most of its aroma from the Sangioveto (which is my particular aim) as well as a certain vigor in taste; the Canajuolo gives it a sweetness which tempers the harshness of the former without taking away any of its aroma, though it has an aroma all of its own; the Malvagia, which could probably be omitted for wines for laying down, tends to dilute the wine made from the first two grapes, but increases the taste and makes the wine lighter and more readily suitable for daily consumption…”

In the late 1800s and early 1900s, Canaiolo and Sangiovese oscillated in popularity as the majority grape in the blend, but, over time, Ricasoli’s ideas began to take on more popularity.

Later, in 1932, a man named Giovanni Dalmasso teamed up with some colleagues and produced a commission on the state of Italian wine. As a university professor who specialized in viticulture, and a grape breeder who introduced a few of his own crossings, Delmasso wrote extensively on Italian wine. His writings on Chianti have influenced what the Chianti region is today. The Dalmasso Commission pointed to a generalized area of Chianti that greatly expanded outward form the historic Chianti zone. Some suggest that the aim of the commission could have been to boost the local economy by transposing the Chianti name to a larger region to promote the nice tables wines made in Tuscany; but, the commission report could have been Dalmasso’s observations of the state of the region at that time, drawing parallels between the historic Chianti zone and the surrounding areas. Ideas in this commission report were written into regulation.

Since the Dalmasso Commission, the historic Chianti region posited by Cosimo III has taken actions to re-claim the distinctiveness once reserved just for themselves, and today, the Chianti Classico zone plays by slightly different rules than Chianti at large. 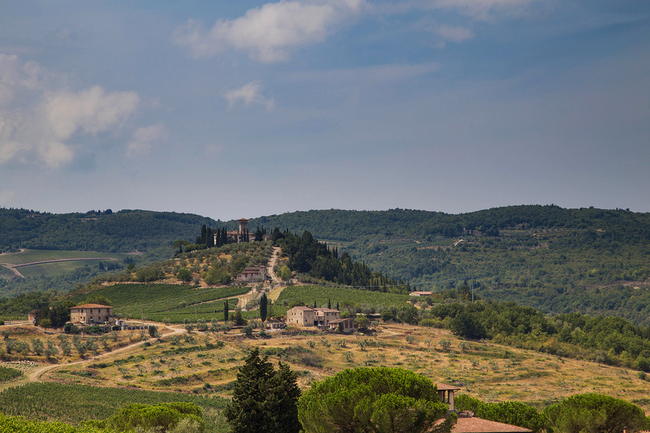 In 1967, DOC regulations took Ricasoli’s ideas and wrote them into DOC law. The wines were to be mostly sangiovese, with possibly some canaiolo, and 10-30% of malvasia and/or trebbiano.

In 1984, the historic Chianti Classico region became DOCG and the rules here changed again with the aim of increasing quality. White grape minimums were lowered to 2%, yields were also lowered, vine age requirements were established, and extract levels were raised. The regulations also allowed for 10% of non-traditional grape varieties to be included, which greatly expanded the scope of what Chianti could be.

In 1996 things changed again: sangiovese could be 75-100% of the wine; and in 2006, white grapes have no longer been allowed in Chianti Classico.

Ultimately, as you look over the last few centuries of Chianti, there have been many changes and shifts in what local winemakers think Chianti wine is and should be, and if we had the time-travel option to taste a contemporary version of a Chianti sampling from the last few centuries at 25-year increments, I imagine we’d be greatly surprised at how Chianti has changed over the years. The wine region is a kind of wine geek’s paradox: that age-old land that sits between Florence and Siena has so many stoic vestiges of the past from abbeys and ornate churches, to ancient theaters and even wine estates that date back close to a thousand years. You can hang out in a Medieval tower, or walk the streets of Florence or Siena and literally feel as if you have stepped back several centuries in time. There is a feeling of powerful and ancient tradition. And yet, when you actually look at the last few centuries of history, this area has continually reinvented itself. In the wake of changing global pressures the region has renegotiated its politics, its modernity, and the basic idea of what Chianti wine is. And if you get into the IGTs, the seemingly “traditional” Chianti wine region is actually full of inspired individuals who push the boundaries of regional wine beyond DOC limits without fear of bucking “tradition.”

It’s neat to taste all the different micro-expressions of what Chianti is today, but it’s also curious to ponder: what will it be in 10-20 years?

Next up, a Chianti producer with centuries of history that has experienced all these changes from front row theater seats.

Spolaor, Elena. (c2015) “The History of Chianti from the Etruscans to Chianti Classico.” www.chianti.info.

Photos of Chianti courtesy of Bigstock