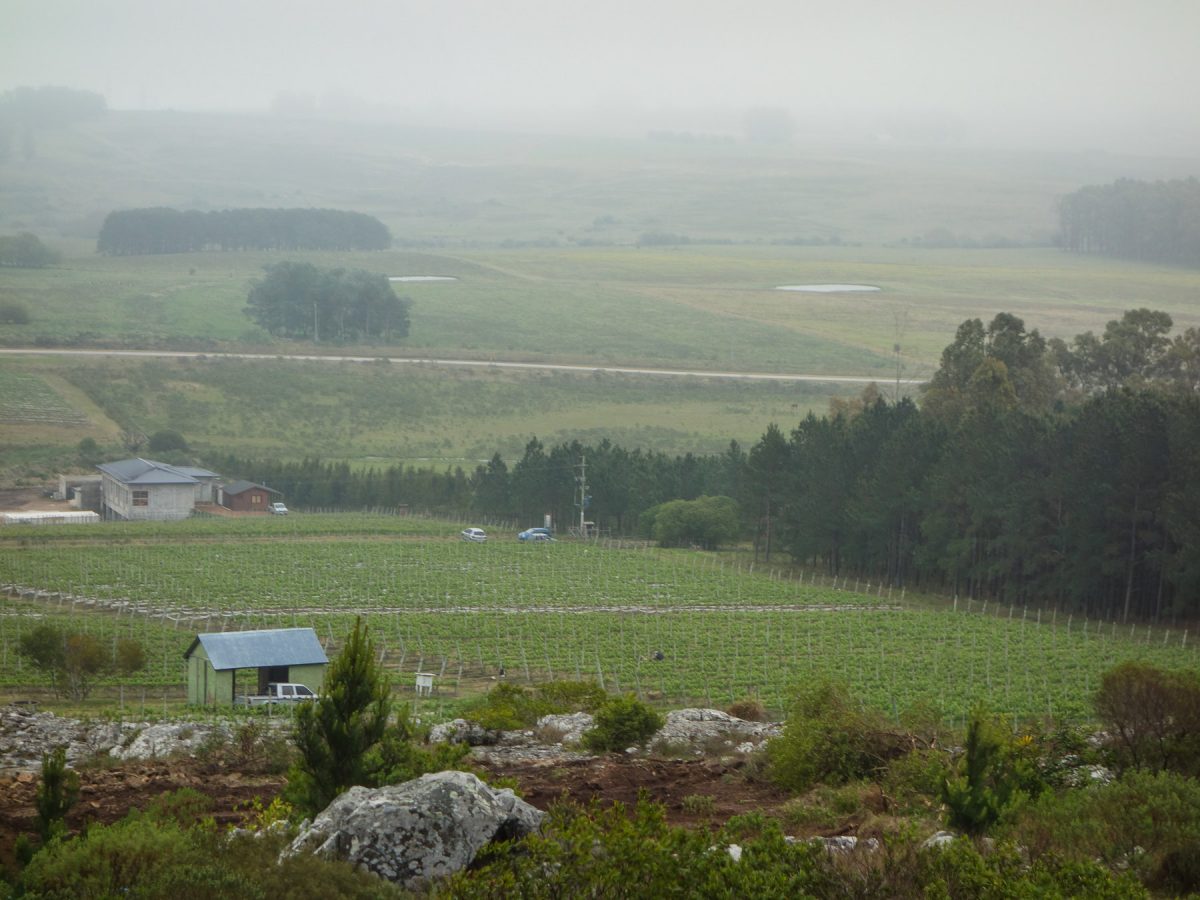 Most people probably hold the supposition that visiting vineyards and tasting wine are best done in good weather, when you can stroll among the vineyard rows with a glass in hand, blue sky overhead, and the sound of exotic birds calling from the nearby trees. Those moments, of which I have been lucky enough to partake many times, offer a certain idyll that can’t be denied. Yet I often learn much more about the character of a place under less than ideal circumstances.

A few weeks ago I emerged from the shelter and warmth of a vehicle to howling winds and intermittent rain on a ragged hillside. Through the low clouds and mist, outcrops of weathered schist bulged their mottled humps through the spring grass like the backs of whales emerging from a stormy ocean. I found myself smiling even as I turned my collar up and hustled across the muddy driveway to the rustic enclosed porch that serves as a tasting room for Alto de la Ballena winery in the state of Maldonado, Uruguay. 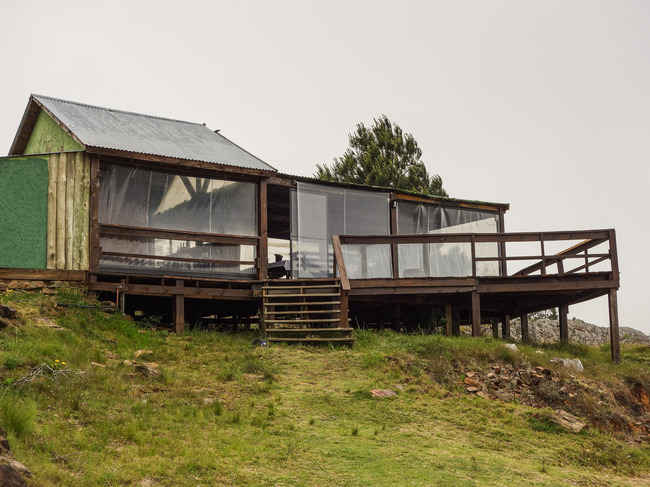 There’s something about experiencing the extremes of a place that I find hints at the struggles of the vines themselves. Adversity, it seems, can often make for excellent wine, and that is certainly the case at Alto de la Ballena, or “heights of the whale” as its owners Paula and Alvaro Lorenzo have called their slice of the small mountain known as Sierra de la Ballena.

The mountain (or what passes for a mountain in the notoriously flat Uruguay) presumably takes its name for the fact that on a clear day, you can see pods of Southern Right whales (Eubalaena australis) breaching in the ocean as they migrate down the Atlantic coast of South America.

But no such view was available on the stormy Tuesday of my visit. Instead, we watched the vines with their new spring growth tremble and listened as the wind lashed the thin plastic walls that separated us from the storm outside. And, of course, we drank great Tannat. 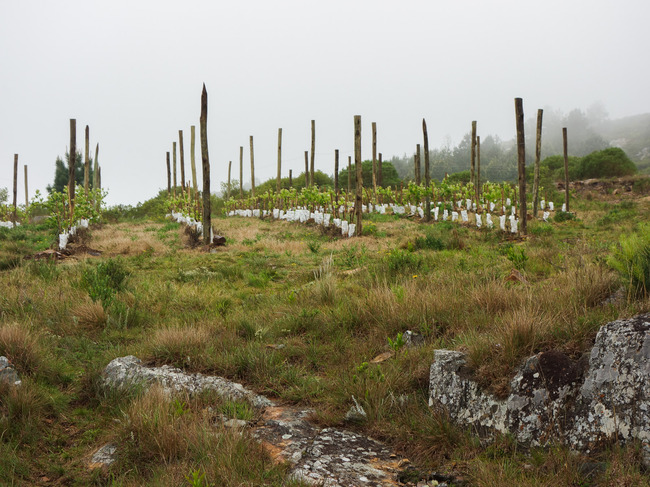 The Lorenzos began their odyssey as vintners in a very Californian way. “We used to live in Montevideo, and had no background in the wine business,” said Paula. “I worked at Citibank for 10 years, but I’m an electrical engineer by training. Alvaro is a lawyer and he worked for a big shipping company. We were starting to learn about wine. We joined a wine club in 1996, and we started traveling to learn more, to Mendoza, to California.”

“I grew up in the countryside,” said Alvaro, “And we were working so hard in our city jobs, we were not spending time together. I wanted to do a project — something we could do together.”

By 1998, the couple had gotten serious and decided that creating a small winery was going to be just the thing. After consulting with the national viticultural institute and speaking with one of their agronomists, they centered their search on the Southeast part of the country, and in particular, they went looking for plantable hillsides, which are in fairly short supply in Uruguay.

Eventually the found a 50-acre parcel of hillside where the topsoil barely covered huge swaths of decomposing, Pre-cambrian granite and schist, and got to work. At the urging of their consulting agronomist, they planted Merlot and Cabernet Franc at first. Then a few years later, following their Rhone-loving hearts, they planted Syrah and Viognier. And in honor of their country, they planted Tannat. “It’s the signature grape of Uruguay” said Alvaro, almost apologetically. 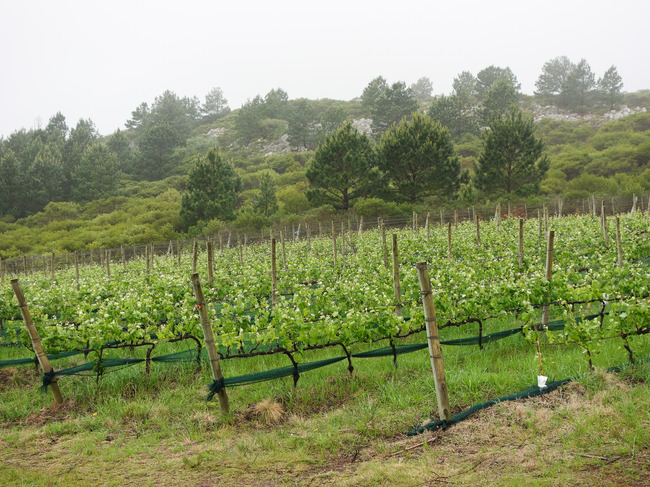 Near the top of the hill, behind their clap-trap tasting room, the Syrah vines are planted in small patches, where a man with a tractor was paid to remove boulders the size of small cars so they could plant. Father down the slope, towards the lower reaches of the property where alluvial deposits, a vein of limestone and and a small stream have made for deeper and more clay-filled soils, the vineyard is more contiguous and the Merlot and Cabernet Franc grow happily.

The first harvest was in 2001 — a small amount of Cabernet Franc, Merlot, and Tannat. By 2006, their Viognier was ready, but the Syrah had not quite matured enough to harvest. After making a barrel of Viognier that year, on a whim they tried a blend of 90% Tannat and 10% Viognier, with surprising results. It was spectacular, and pretty much everyone in the country agreed. This blend put the tiny winery on the map, and inspired several others to try the combination, which is now widely accepted as a unique Uruguayan treat. The demand for the blend so outstripped the Lorenzos’ expectation, that they have had to graft some of their Merlot and Cabernet Franc over to Syrah and Viognier to keep the frenzy at bay. 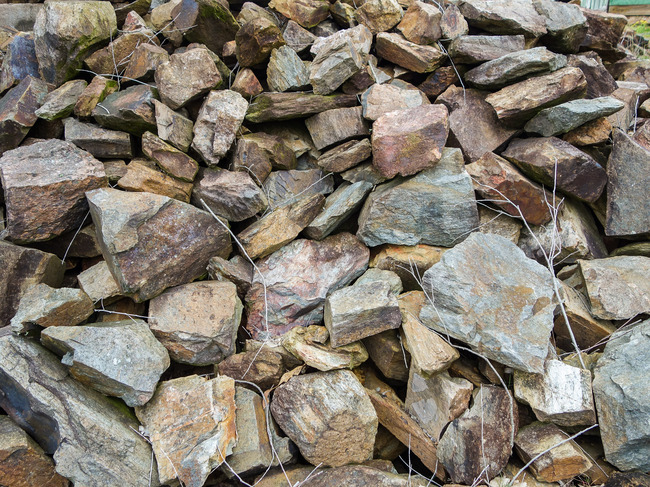 Figuring out how to get the Viognier and Tannat to mature at reasonably similar time scales has been quite the trick. “We need to delay its cycle, so we do a very late pruning,” says Alvaro, “almost right before it would begin to grow in late September or early October.”

The winemaking at Alto de la Ballena displays a sure hand, and after tasting several wineries who use him as a consultant, the relatively clear signature of Duncan Killiner. Indeed, as I traveled through Uruguay, many of the best wines I tasted seem to have been a product of his restrained approach to winemaking and viticulture. A native Kiwi, Killiner has made quite a mark on both Uruguay and Argentina, helping many small wineries get off the ground and establishing a trajectory for quality.

The wines of Alto de la Ballena display a mature assuredness that comes across as a sort of effortless grace — from the basic Tannat to the flagship “Cetus” wine. Perhaps even more compellingly, they bear the distinct minerality that I have come to adore from wines grown on granite. They also, I might suggest, speak something of their lonely hillside where the weather blows in off the Atlantic, across the backs of migrating whales. 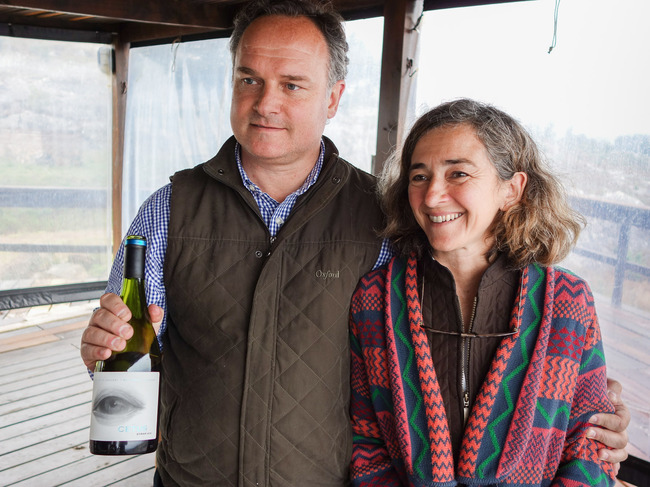 2014 Alto de la Ballena Rosé, Uruguay
Pale ruby in the glass, this wine smells of fresh berries and a hint of citrus peel. In the mouth, crushed berries and a hint of green herbs mix with watermelon rind and a nice minerality. Crisp and bright, with a faint bitterness and a touch of saltiness lingering in the finish. A blend of 75% Merlot and 35% Cabernet Franc cofermented. 13.3% alcohol. Score: around 8.5.

2012 Alto de la Ballena Red Blend, Uruguay
Dark garnet in the glass, this wine smells of tobacco and black cherry. In the mouth, flavors of leather and tobacco mix with a darker earthiness. There’s a wonderfully smooth skein of tannins that provide a muscular structure to the wine but without a lot of grip. A blend of Tannat, Merlot, and Cabernet Franc with the Tannat aged in American Oak for 9 months with the rest seeing no wood. 13.5% alcohol. Score: around 8.5. Cost: $14. click to buy.

2010 Alto de la Ballena “Reserva” Cabernet Franc, Uruguay
Very dark garnet in the glass, this wine smells of black cherry and plum and tobacco. In the mouth wonderfully savory flavors of cherry, plum, tobacco, and green herbs are smooth and quite delicious.

Excellent acidity. Aged for 1 year in French oak before bottling, and released 4 years later. 14% alcohol. 2600 bottles made. Score: around 9.

2011 Alto de la Ballena “Reserva” Red Blend, Uruguay
Dark garnet in the glass, this wine smells of crushed nuts and coconut. In the mouth tight tannins wrap around a core of cherry and American oak. Excellent acidity and length. A unique blend of 85% Tannat and 15% Viognier that is showing too much oak for me, but other than that, is quite a pretty wine. 14% alcohol. 1200 cases made. Score: around 8.5 and 9. Cost: $19. click to buy.

2010 Alto de la Ballena “Reserva” Red Blend, Uruguay
Dark garnet in the glass, this wine smells of boysenberry and black cherry fruit. In the mouth, a very smooth skein of tannins wrap around a core of cherry and tobacco and a bit of dusty earth. Wonderfully smooth and balanced with excellent acidity and a distinct mineral signature. 14% alcohol. 9800 bottles made. Score: around 9.

2007 Alto de la Ballena “Reserva” Red Blend, Uruguay
Dark ruby in the glass, this wine smells of cedar and sandalwood. In the mouth the wine has a wonderful bright and juicy minerality. It has transformed to its secondary aromas beautifully, with cedar, sandalwood and dried herbs layered over wet stone wrapped with fine grained tannins. A wonderful floral sweetness lingers in the finish. This was only the second harvest from the vineyard. 85% Tannat and 15% Viognier. 13.5% alcohol. 3800 bottles made. Score: around 9 and 9.5.

2009 Alto de la Ballena “Reserva” Merlot, Uruguay
Dark ruby in the glass, this wine smells of dark plum and black cherry. In the mouth, juicy black cherry and black plum flavors are shot through with fine grained tannins and dark earthy flavors. Wonderfully balanced and bright. Probably was a bit fierce just out of the barrel when it was bottled in 2010, but now it is wonderfully smooth and integrated. 5000 bottles made. 14.5% alcohol. Score: around 9.

2010 Alto de la Ballena “Cetus” Syrah, Uruguay
Dark garnet in the glass, this wine smells of dusty, slightly smoky blackberry and oak with a hint of whiskey barrel. In the mouth, blackberry and black pepper flavors are scented with a slightly smoky aroma that resembles the smell of a power tool worked too fast on wood. Smooth tannins have a slightly drying quality. Excellent acidity. Ultimately, I feel the oak is a little too present in this wine, but the wine is pretty compelling. 13.5% alcohol. Score: around 8.5 and 9.

2011 Alto de la Ballena “Cetus” Red Blend, Uruguay
Dark garnet in the glass, this wine smells of black cherry and tobacco and a hint of oak. In the mouth the wine is wrapped in a silky blanket of very fine grained tannins. It’s core is deep cherry, green herbs, and tobacco with a wonderful minerality. A very regal wine that would hold its own in a lineup of Bordeaux very easily. A blend of 55% Cabernet Franc, 40% Merlot, and 5% Syrah. 13.5% alcohol. 1400 bottles made. Score: around 9 and 9.5.