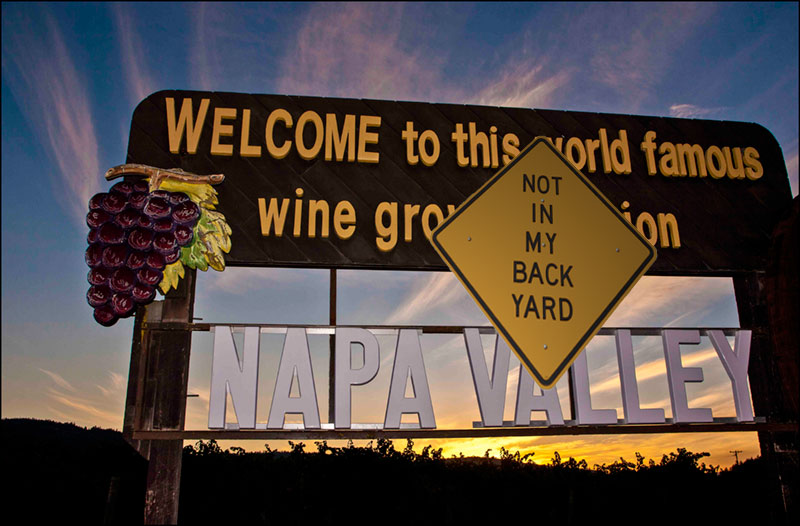 Things are getting nasty in Napa.

On Monday 4 April the Napa County Planning Commission expected to make a decision granting a permit for planting a new vineyard. On its face, this was an action the commission has performed hundreds of times. But on that Monday it was anything but business as usual.

Instead of a quiet, internal meeting, this one took place in a public forum. Protesters stood outside holding signs that read ‘Chainsaw Wine’, ‘What about the Cancer?’ and ‘Enough is Enough’. They chanted in the shadow of a sign too big to carry that read ‘Walt Ranch = To Hall with the Environment’.

The permit under review was from Kathryn and Craig Hall, owners of HALL winery. In 2005 they purchased a 2,300-acre (930-ha) piece of land on the eastern edge of Napa Valley known as Walt Ranch. In 2008 they applied for a permit to plant a vineyard on the property, the entirety of which was already zoned for agriculture, and followed the instructions and regulations required.

Eight years later, having spent (at the county’s direction and with little choice in the matter) $4 million to produce the longest and most thorough (2,200 pages in length) environmental impact report ever conducted in Napa, and having adjusted their plans to meet every single recommendation in the report conducted by the county’s independent consultants, the Halls were told that instead of simply granting their permit, the Board of Supervisors was going to hold a public hearing. At the hearing, the Halls were given the opportunity to speak about their project. They were also given the opportunity to hear public comments from several dozen members of the public such as, ‘Go back to Texas where you belong, we don’t want you here’ and ‘You have enough money, why do you need another vineyard?’