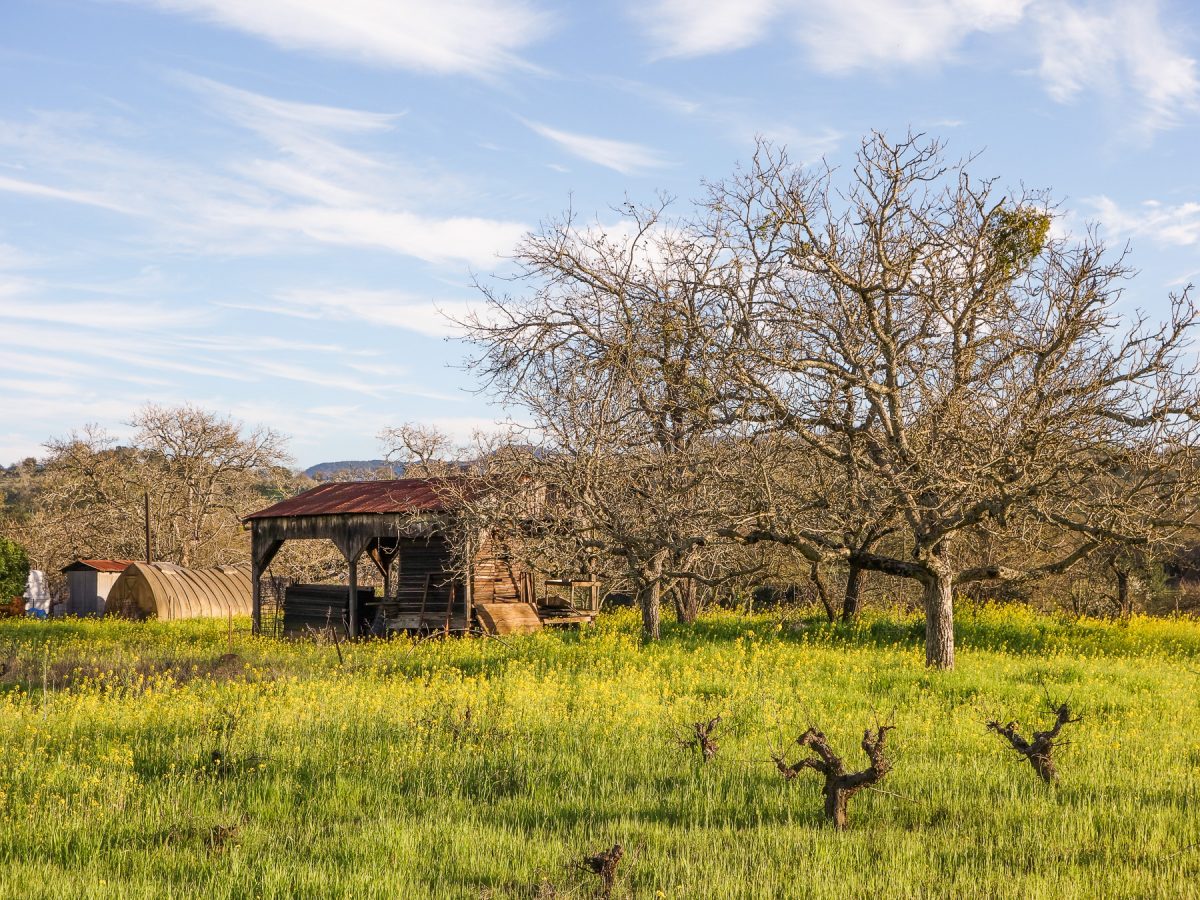 The idea that a place as well-trodden as Napa might still harbor secret corners seems slightly laughable in this day and age. But if any place might still claim a shred of obscurity it would be Coombsville. Tucked behind the city of Napa to the northeast, this recently minted (as of 2011) AVA has been hiding in plain sight for a while.

Cooled by the same fog and breezes from the San Pablo bay that make Carneros such a cooler region than the rest of Napa, Coombsville’s rolling hills of volcanic and alluvial soils make for a goldilocks environment perfect for Cabernet Sauvignon. Especially in the face of the upward creep of temperatures coming to Napa Valley. Coombsville actually possesses the most consistent climate and soil profile of any of Napa’s 16 AVAs.

Named for the founder of the city of Napa, Nathan Coombs, Coombsville was mostly used for grazing and non-wine agriculture until after prohibition. Mostly.

Before phylloxera swept through Napa at the end of the 19th century, a couple of wineries were growing grapes in the area. The exact grape acreage in those days proves difficult to pin down, but according to wine historian Charles Sullivan, Antonio Carbone had 40 acres of Zinfandel, Mataro, and Burger planted off of Coombsville. Carbone was the first to plant the area, and his winery building, dating to 1886, is currently under renovation by superstar winemaker Andy Erickson and his wife Annie Favia for their Favia label.

Another early pioneer possessed the charming name of Pleasant Stevens. In 1905, this mustachioed merchant seaman and his family planted what is known today as the R.W. Moore vineyard. It still produces Zinfandel off of its gnarled head-trained vines at the corner of First Street and Hagen Road (shown above).

Apart from these couple of relics, few traces of Coombsville’s original winegrowing history remain. Like most other parts of Napa, the area was wiped out by the one-two punch of phylloxera and Prohibition.

In the Sixties and Seventies, land in Coombsville, as in many places in Napa, was pretty cheap. If anyone was thinking of planting grapes, mostly they were considering the main Napa corridor around Oakville and St. Helena. Luckily a few folks were looking farther afield, and exploring the rolling hills at the base of Mount George on the northeastern side of Napa. 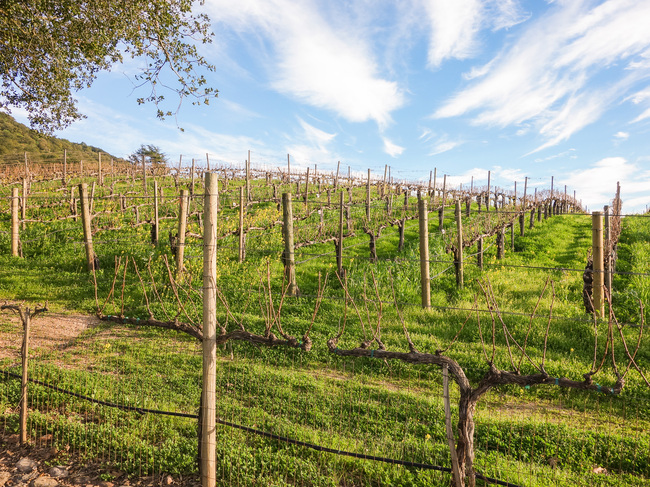 My introduction to Coombsville came at the hands of a Farella wine. Frank Farella was (and still is) a successful San Francisco lawyer who ended up representing Robert Mondavi in most of his affairs, including serving on the board of the Mondavi winery for a time. The winery has been under the direction of his son Tom Farella for the past 30 years or so, who has been making understated, elegant wines off their estate while selling the majority of their fruit to some of the top names in Napa.

Farella’s wines have been among my favorites in Napa for years, and Coombsville has held a special place in my heart as a result. In more recent years, Farella has been joined by a number of other excellent producers, including Meteor Vineyards, Rocca Family Vineyards, and more. The AVA’s boundaries encompass 11,300 acres, of which about 1400 are under vine. In the mere five years since it was established, more than 300 individual wines now print the AVA designation on their label.

If you’ve not yet taken the detour off the beaten path of Napa to visit Coombsville, I recommend the trip.

Here are a few representative wines from the region:

2012 Scalon Cellars “Priority” Red Blend, Coombsville, Napa
Very dark garnet in the glass, this wine smells of black cherry and tobacco with a hint of black olive. In the mouth, black cherry, raisins, cassis and black olive savoriness have a nice blend of fruit and darker saline notes that make for a delicious mix. Faint, very supple tannins caress the palate through a nice finish. Decent acidity. 14.3% alcohol. Score: between 8.5 and 9. Cost: $45.

2012 Scalon Cellars Cabernet Sauvignon, Coombsville, Napa
Inky garnet in the glass, this wine smells of cherry and tobacco leaf. In the mouth, bright cherry and green herbal flavors have a nice bounce thanks to excellent acidity and a gorgeous sweet aromatic profile that is very charming. Suede-like tannins creep around the edges of the mouth as the wine finishes long and bright. Excellent. 13.5% alcohol. Score: between 9 and 9.5. Cost: $85.

2012 Purlieu Cabernet Sauvignon, Coombsville, Napa
Inky garnet in color, this wine smells of black cherry, chocolate, and oak. In the mouth, sweet dark cherry, cocoa powder, and sweet tobacco are dusted with powdery tannins and a hint of oak. Smooth, rich, and very well balanced despite its 15% alcohol. If you like ’em big and ripe, you’ll love this wine. Score: around 9. Cost: $95. click to buy.

2012 Rocca Family Vineyards “Collinetta Vineyard” Cabernet Sauvignon, Coombsville, Napa
Dark garnet in the glass, this wine smells of black cherry and blueberries. In the mouth, black cherry, blueberry and chocolate flavors have a nice rich brightness thanks to excellent acidity. Mouth-coating powdery tannins fill every nook and cranny of the mouth as the wine soars through a long finish. Excellent, rich, and ripe. 14.7% alcohol. Score: between 9 and 9.5. Cost: $80. click to buy.

2012 Farella “Estate” Cabernet Sauvignon, Coombsville, Napa
Dark garnet in the glass, this wine smells of bright cherry and tobacco. In the mouth, juicy bright cherry, tobacco, earth and green herbs swirl in a bright, vibrant bolt across the palate. Powdery, faint tannins are gauzy in the mouth as the fruit and earth soar through a long finish. Excellent acidity and balance. Killer juice. 14.8% alcohol. Score: between 9 and 9.5. Cost: $65. click to buy.

2012 Farella Merlot, Coombsville, Napa
Medium to dark garnet in the glass, this wine smells of violets and black plum with a hint of licorice. In the mouth, black cherry and black plum flavors are shot through with the raw salty black licorice you can buy in coils in Scandinavia. Notes of dried herbs linger in the finish. 14.5% alcohol. Score: between 8.5 and 9. Cost: $40. click to buy.