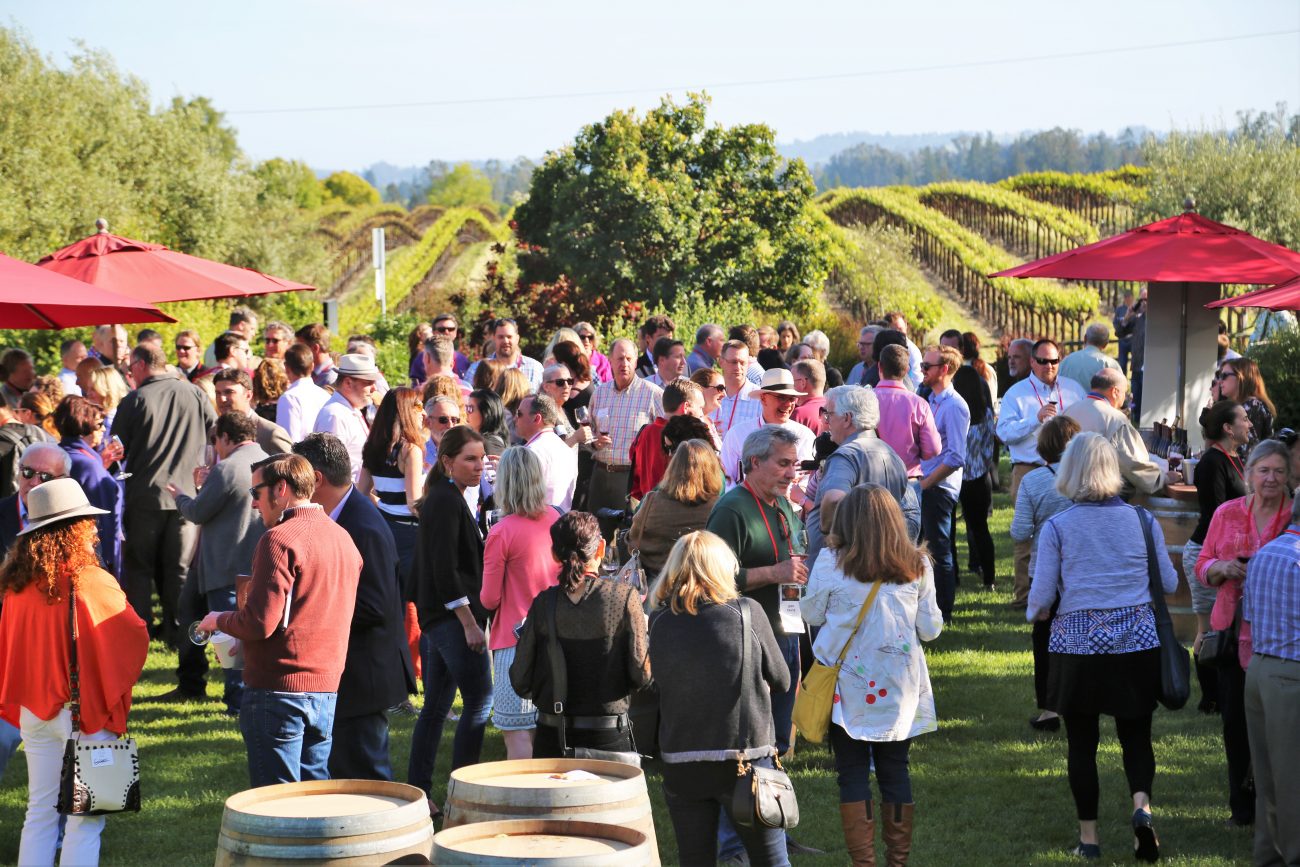 Wine auctions are big business. Many major wine regions around the country and around the world hold auctions of some kind or another. They vary in their focus and approach, with some aimed at the general public, and others focused on the trade and media. Some are ways of raising money for the local community or charities. Some are used to raise money for the marketing of the wine region itself. All of them are a way of raising the profile of their regions through a focused celebration and the sale of what are often their best wines.

As a wine writer, such auctions are an opportunity to taste through a broad selection of wines (usually from the most recent vintage) in a single spot. Which is why I generally try to attend such events if I can, and try to taste as many wines as I can manage in the time provided for tasting.

I attend the trade-focused Premiere Napa Valley event every year and do my best to taste through all the wines on offer, but that has become nearly impossible as the number of lots on offer there has climbed past 200.

This year the stars aligned to open up a spot on my calendar and I had the opportunity to attend the Sonoma County Barrel Auction for the first time.

Like Napa’s Premiere auction, the Sonoma County Barrel Auction exists to fund the operations of the Sonoma County Vintners (SCV) association and the AVA-specific marketing organizations that partner with the SCV, through the sale of one-of-a-kind barrel lots to members of the wine trade.

The Sonoma County Barrel Auction, however, is both smaller in scope than the Premiere auction, and much more in its infancy, this year being only its third incarnation. Thanks to increasing returns from the auction, however, it seems likely to continue. This year’s auction of 90 lots raised a total of $794,500, an increase of more than $100,000 from last year. By way of comparison, Napa’s Premiere auction raised $4.2 million for the Napa Vintners this year.

The price tag of the wines isn’t the only difference between the two auctions, of course. The Sonoma County Barrel Auction feels much more intimate and casual, in part because there are less than half of the number of auction lots available for tasting, and also because there are around one quarter of the number of people in attendance. The tasting environment, too, feels a bit more laid back, ranging as it does through a number of conference rooms and the patio at the Vintners Inn outside of Santa Rosa.

As someone there primarily to taste the wines (as opposed to scope out potential purchases or schmooze with vintners), the vibe and the fewer number of lots, not to mention the lack of a crowd made for a more enjoyable tasting experience than the melee of Premiere Napa Valley.

Having said that, I think Sonoma County Vintners could stand to take a few tips from their glitzier cousins over the hill. For instance, I found a number of tables staffed primarily with marketing folks from the winery, rather than the owner or winemaker. Now this could be purely a coincidence of when I visited the table, so perhaps this was more the exception than the rule. I don’t make a lot of conversation with folks at tastings like this, but when I do, I definitely appreciate having the owner or winemaker there to talk authoritatively about the wine or the vineyard. If I were a buyer about to shell out thousands of dollars for the auction lot, I would certainly want the opportunity to meet the folks behind the label, not just some marketing person.

The other thing that I found a little disappointing was the lack of a number of big names in Sonoma County wine. Certainly a number of the more prominent and famous (read: most sought after and pricey) wineries in Sonoma were in attendance, such as Kosta Browne, Silver Oak, Ramey, Jordan, Martinelli, Williams Selyem, and Patz & Hall. A few others were there in spirit, having some of their wine included in some special blends, such as Rochioli, Merry Edwards and Littorai. But there were a notable list of absences.

The organizers of the event can hardly be blamed for this, as I’m sure they can’t compel participation (which doubtless has a very real cost) in any way. But I can’t help but think that the auction proceeds, not to mention the attendance and interest in the event would be helped by the presence of wines on offer from the likes of Kistler, Hanzell, Verite, Peter Michael Estate, Marcassin, and Kamen Estate. Not to mention some of the more prominent up-and-coming wineries such as Arnot-Roberts, Ceritas, Cobb, Ryme, Wind Gap, etc.

Of course, those folks would also have to be members of the Sonoma County Vintners association, which many may not be. And that point really represents what I think is the greatest weakness that this event will need to overcome in order to truly shine, and in order to start bringing in the big dollars and attention that it surely deserves. 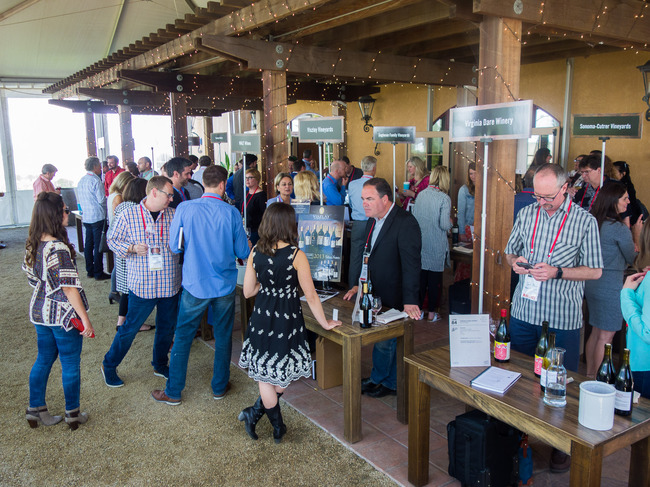 The fact of the matter is that Sonoma county is a rather fractured and divided wine growing region. Unlike Napa, in which a significant majority of the more than 500 producers belong to the Vintners Association, only around half of Sonoma’s more than 500 producers belong to the Sonoma Vintners association. I have not checked the membership roles to be able to ground my speculation, but I wonder if there aren’t a lot of wineries that either don’t belong to any regional marketing association, or are members of their own specific regional groups such as Dry Creek Winegrowers, Alexander Valley Winegrowers, or Sonoma Valley Winery Association and not members of the Sonoma Vintners.

If true, it seems to me, that is a bit of a shame. Sonoma wines are world class, and deserve a lot more attention than they get.

Which brings me to my last set of observations about the auction. While it is not surprising that the majority of the lots were Pinot Noir and Chardonnay (as those are historically the most expensive wines from Sonoma County), it seems like a missed opportunity to not have a bunch more Cabernets from Alexander Valley (which, if unique and special lots, might drive up prices), not to mention a few Zinfandels.

I must say that I expected to experience a few more “wow” wines than I tasted at this event. Perhaps that may be asking too much of Pinot and Chardonnay at a mere 8 months into their lives as wines, but their youth can’t be the only thing responsible. I enjoyed the tasting thoroughly, and as my scores below indicate there were a lot of excellent wines on offer. But there were many fewer really fantastic wines than there should have been, in my opinion, this being an auction of ultra special wines designed to command a premium.

On the other hand, maybe I was just in a hard-to-impress mood that day. Regardless, this was a worthy event, for a worthy cause, and I wish nothing but continued success and recognition for Sonoma County wines, and I hope as this barrel auction continues to establish itself, that even more famous producers will support it by donating barrel lots. I can’t wait to taste them.

Here are my notes as I recorded them for all 90 auction lots.

WHITE WINES WITH A SCORE AROUND 7
2015 Don Sebastiani & Sons “All in the Family Reserve Chardonnay” Chardonnay, Sonoma Valley

RED WINES WITH A SCORE BETWEEN 9 AND 9.5
2015 Dry Creek Vineyard “45 Years of Excellence” Zinfandel, Dry Creek Valley
Lovely savory cassis and blackberry and earth mix with dried herbs. Ripe but not too ripe. Contains 20% Petite Sirah

2016 Keller Estate “Pinot, if You Please” Pinot Noir, Sonoma Coast
Herbal and floral enough to suggest whole cluster, but none at all, it turns out. Raspberry and cherry fruit merge with an earthy note.

2014 Merriam Vineyards “Revel in the Right Bank” Red Blend, Russian River Valley
Lean in flavor, despite nearly 15% alcohol, with hints of herbs. And tight tannins — must be the lack of new wood. Nice. Good acid. A blend of 70% Merlot and 30% Cabernet Franc.

The Russian River Valley Winegrowers lot included 5 different wines, each from a different area of the AVA. Four of them scored around 9 on my scale, and one a little shy of that. Here are the four tastiest bits: