How to Move Your Wine Collection Across Town 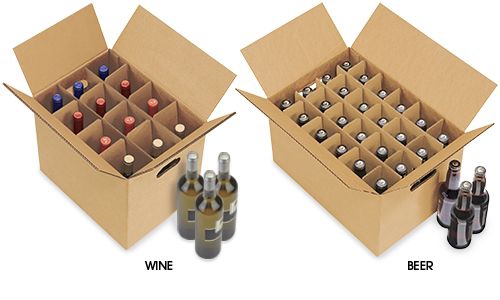 As some of you know, I recently moved house. After 17 years in San Francisco, we needed a bit more space and were ready to invest in real estate rather than in private school.

I’ve always said I’d rather get a root canal than move, and that’s definitely true. It’s one of my least favorite activities in the world. In any case, this time around moving involved some more tricky problems. Apart from how to deal with 17 years of accumulated crap, I needed to figure out how to get the contents of my wine cellar from my house in San Francisco to our new home across the bay in Piedmont.

In my case, this meant figuring out the transport of 752 bottles of wine, some precious, some not so precious. In the hopes that my experience might be slightly instructive to someone else in the same position, here’s how I made it happen.

Of course, the first thing I did was start worrying. Mostly about the fact that I was going to have to move this wine in mid-August, a time of great variability in weather here in the San Francisco Bay Area. Some years, the weather is gloriously mild. Other years have seen 100 degree plus heatwaves. The idea of the wine being in a hot truck for an hour or so (assuming some traffic) was worrying me. So I started looking into refrigerated trucking, and went so far as to get quotes from outfits like Western Carriers and The Wine Mover. The quotes ranged from $2100 to $4000, and made me a little sick to my stomach.

But then some friends on Facebook talked some sense into me — namely that I could always do the move at night, which would increase my chances of cooler temperatures, and that the thermal mass of the wine was not going to heat up to dangerous levels even with 30 minutes in a hot truck.

So once I stopped worrying about specialized transport, this task ended up being about simple logistics, good supplies, elbow grease, and a friend with a large truck.

The first thing I needed was something to carry the bottles in. I ended up buying a bunch of wine boxes from the purveyor of all things cardboard related, Uline. Specifically I bought a bunch of these handy corrugated bottle carriers.

These boxes are great for two primary reasons — they can handle Burgundy bottles as well as Bordeaux bottles, and they have handy little handle holes in the sides that make them MUCH easier to schlep around than if they didn’t have them.

Of course, these boxes have their limitations, as they can’t handle oversize bottles of Champagne, and they have some difficulties with Riesling as well. 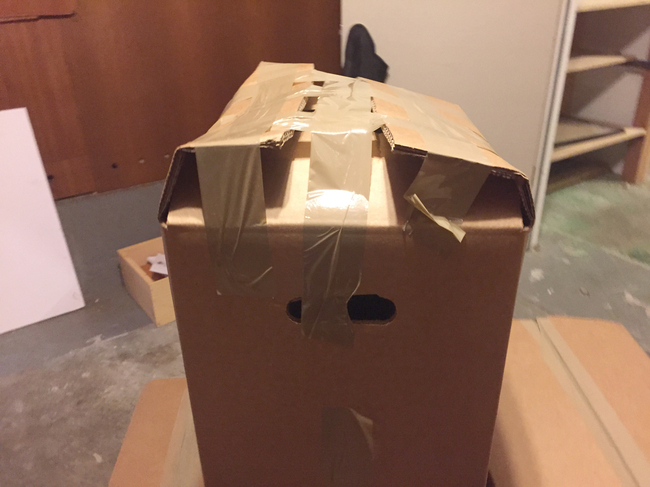 Tape. Did I mention tape? I needed a lot of tape. Tape to assemble the boxes, and then tape to close them. Some required, ahem, a little more than others.

Assembling the boxes was something of a chore, but easy enough. Filling them was also not that hard, though I tried to not just sling bottles into boxes, but to group them into boxes of the same type in an attempt to make my life easier on the other end of this process. More on that in a minute. With the boxes filled and taped up, I then was quite glad I had purchased a decent hand truck to move them around. With the hand truck, I could move three cases at once (carefully), which came in super handy in terms of getting the wine out of my cellar and to the front of my garage where it waited to be loaded.

But I’m getting ahead of myself. After boxing everything up, I stacked it in the cellar until the day before the scheduled move. Then, the day before, I moved it from my cellar area into the neighboring garage. The next morning (early and slightly foggy) a friend with a big pickup truck showed up with another strong-backed friend, and we loaded the wine into the bed of the pickup and into my SUV. I was surprised that I was able to fit about 17 or 18 cases of wine into my SUV. With the wine stacked two cases deep in the pickup, we had enough space to transport the wine in a single trip.

On the other end, we unloaded the wine into my new cellar area and that was that. It took me several weeks to get the wine out of boxes and into my new cellar arrangement–some large capacity N’finity Pro wine refrigerators from Wine Enthusiast. It was at this point that I wished I had made some quick note on the outside of each box about what it contained. During those several weeks it took me to get my wine into place, we needed to drink some, and finding what I wanted to drink proved impossible. In the end, we just opted for what we called “wine roulette” where I’d open a box and plunge my hand in, and we’d drink whatever I pulled out. That made for a few fun evenings.

Being the slightly type-A personality that I am, I used this opportunity to completely re-inventory my cellar, as my record keeping in Cellartracker had gotten pretty sloppy over the years. This process involved downloading a full extract of my cellar from Cellartracker, and then painstakingly reconciling every bottle that I took out of a box and put into the fridge with my cellartracker records, including updating the location field for each bottle with the drawer number in which I was placing it.

I then asked the folks over at Cellartracker to delete my cellar inventory and replace it with my new, fully accurate spreadsheet, and now I’m off to the races. In addition to having everything inventoried in Cellartracker, I’ve also sketched little maps of my fridges to aid with browsing. Unlike in my passive cellar where the wine racks permitted some level of visual scanning of bottles from afar, wine fridges don’t show you much. So I made some little diagrams that show roughly what’s on which shelf in each wine fridge, and tacked them to the side of the fridges. 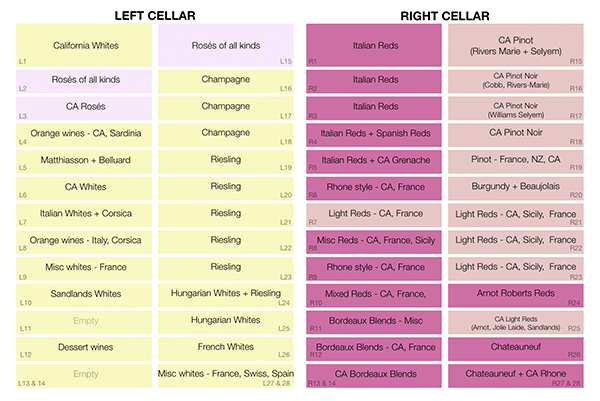 Now that all the boxes are empty, I’ve broken them down and stacked them flat in the corner of my basement. I’m thinking that I’ll keep them for any future wine transportation needs — my own or those of friends. They don’t take up much space, and they weren’t that cheap, so I hope I get some more use out of them.

In all, it was a fairly painless process, thanks in part to the fact that I only needed to move the wine across the bay. A move across state lines would have certainly required a refrigerated truck rental at the very least. In the process, I was reminded of a number of bottles that I’m excited to drink now that I’ve remembered I own them. I was also perhaps reminded that I should drink a bit more before my next set of purchases.