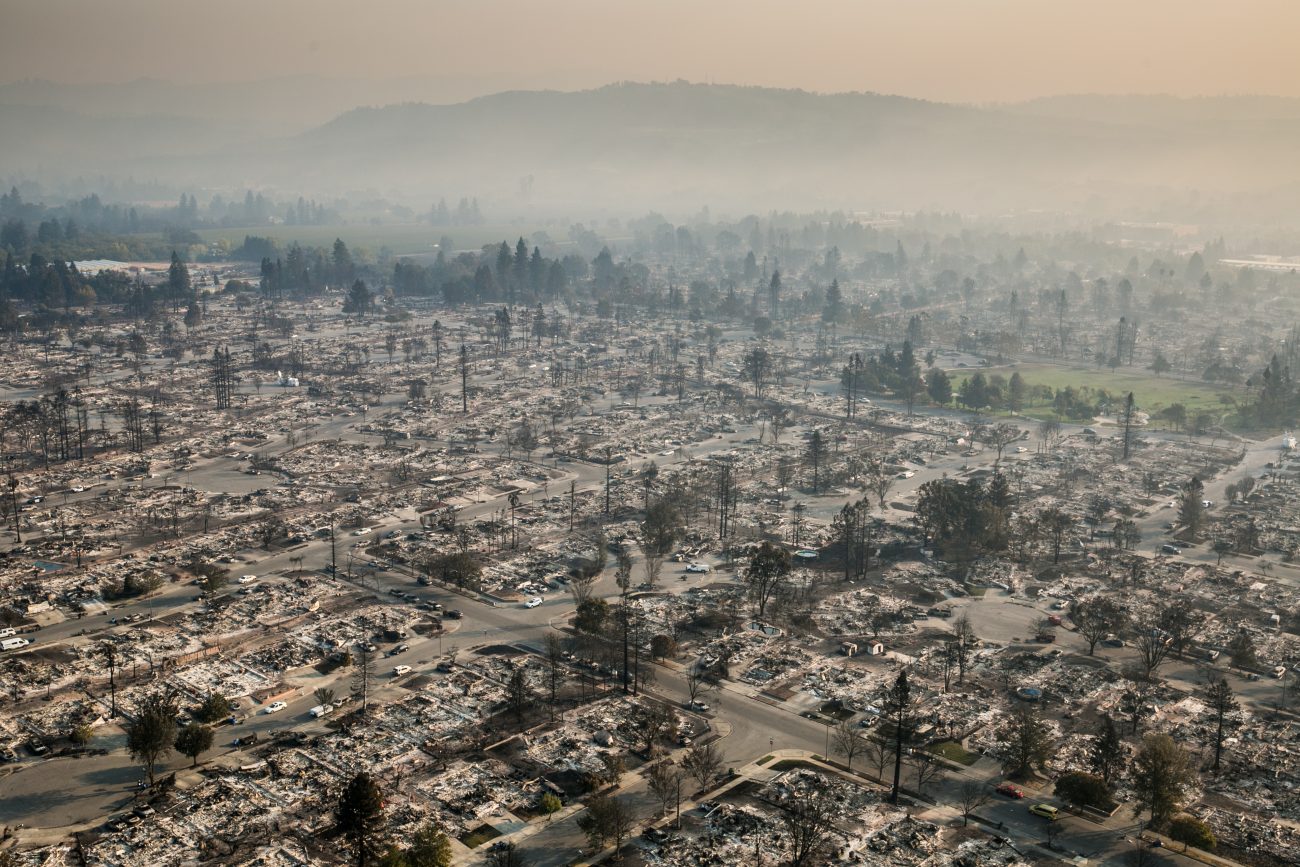 Earlier this week, in my monthly column for Jancis Robinson, I detailed the catastrophe of the fires that have swept through Napa, Sonoma, and Mendocino counties. Thanks to the rain late this week, those fires are well on the way to being fully contained, but the impact of their terrible destruction will linger for many months to come. The death toll from will assuredly rise, as will the damage estimates, which currently stand at more than a billion dollars.

As my friend Dave McIntyre wrote so eloquently last week, while more than a dozen wineries and several vineyards have been destroyed, the true tragedy of these fires will be their impact on the people of wine country, especially the lower income workers in the vineyards and the service industry.

The burning of one building, the Fountaingrove Hilton, has left 130 people without jobs. And that is just one of the hundreds of businesses that have been impacted. Then there are the thousands of people whose homes burned to the ground. Homeowners with insurance are in for a long road of red tape, but will ultimately have some compensation for their loss. But those renting homes or apartments lost in the blaze are in serious trouble, and not just because they’ve lost all their worldly possessions. The loss of a place to live can make getting to work harder, and begin a steep slippery slope towards poverty and more permanent homelessness. And when you lose your job and your home in the same fell swoop? Total disaster.

I can only imagine how these folks must feel to read headlines such as “California’s 2017 Vintage Up in Flames.” In the service of clicks, news outlets around the world have flagrantly sensationalized this disaster. Sure, it’s a catastrophe of epic proportions, one of California’s most significant natural disasters in the last 100 years, but the last things that Wine Country needs are rumors of its death.

Somewhere around 95% of the grapes in Napa and Sonoma county were harvested before the fires broke out, which means the 2017 wines are going to be just fine (and more than that – by all accounts it’s going to be an excellent vintage).

Even some wineries that burned to the ground suffered little or no loss to their wine storage. In some cases those wines were stored offsite, and for others the wide cement and blacktop areas commonly surrounding crush pads and wine storage buildings offered enough defensible space to leave these buildings untouched.

Writing articles that directly or indirectly warn people off buying the 2017 California represents the height of irresponsibility, and like many others, I have spent the past week or two writing pointed e-mails decrying them. In at least one case, an article suggesting the whole vintage was going to be smoke tainted, we have successfully persuaded the publication to remove it from their site.

But let me get to the point here. What we should all be doing — journalists and consumers alike — is supporting California Wine country as much as we can. And the main way we can do that is by encouraging people to buy and drink California wine, and to pay a visit to Sonoma, Napa, or Mendocino, which will all desperately need our tourist dollars.

Please help spread the word that the 2017 vintage is going to be better than fine, and that wine country will welcome visitors with open arms (at least in a couple of weeks as things settle down in the wake of the disaster). Got relatives visiting for Thanksgiving? Take them up to wine country for a visit. Buy Northern California wines for your Thanksgiving table. Give them as gifts for the holidays. And tell everyone you know to buy the 2017 when it comes out beginning early this spring.

Of course, buying wine will not be enough, which is why many people are mobilizing to raise funds to assist the people and communities hardest hit by this disaster. I hope you will join me in supporting these efforts in some form.

Here’s a bunch of the fundraising efforts I know about. If you know of others, feel free to post them in the comments.

DIRECT MONETARY SUPPORT
In the days since the fires began, numerous fundraising efforts sprang up using sites such as GoFundMe.Com, enough so that these giving sites created pages collecting these efforts into a single spot. I’ve been supporting one created by my friend Kimberly Charles, who runs a wine PR firm. She’s been collecting money and then either buying goods and bringing them to shelters, or buying amazon and target gift cards to bring to aid organizations in Sonoma and Napa. One note of caution with regards to this method of giving: anyone can set up a GoFundMe page, so please do some checking to make sure that the organizer is above board and a legitimate victim of the fire or a responsible individual that will put your donation to good use.

Here’s the page that aggregates all the GoFundMe efforts.

In addition to these individual campaigns, several large organizations have set up funds for fire relief, many of which are well positioned to have a great impact, as this kind of community support is what they do all day long.

Olehealth.Org is a nonprofit focused on community health care. They are on the front lines of providing help to victims of the fire and could use your donation.

The Redwood Credit Union has started a fire relief fund for Sonoma County.

The Sonoma County Resilience Fund is a nonprofit that will direct aid to the areas of Sonoma in greatest need.

The Community Foundation of Mendocino has a disaster relief fund for Mendocino.

Undocumented immigrants are not eligible for federal disaster relief. That’s why UndocuFund exists.

COMMUNITY EFFORTS
The wine community has rallied, as they always do, with an amazing sense of solidarity. Several events have been organized to raise funds, perhaps the most impressive of which is a collection of winemakers and sommeliers who are putting on events in California and New York that I highly encourage you to attend. They are also looking for donations of wine that they will sell at the event with 100% of the proceeds going to fire relief.

The various regional wine associations of California have banded together to create #CAWINESTRONG, a campaign for supporting the wine industry in recovery efforts. In addition to taking donations directly, they have also signed up many of their member wineries to donate portions of their sales to relief efforts.

Many Livermore Valley wineries are raising funds, as are many wineries from Paso Robles.

The Howell Mountain Harvest Tasting on November 4th in Yountville will have a silent auction benefitting the Angwin Fire Department, who heavily contributed to firefighting efforts in the past few weeks.

HALL Wines is soliciting donations for aid AND matching those donations up to an impressive $100,000.

The Vineyards to Villages Wine Safari Event on November 10th through the 12th will be raising funds.

Flora Springs is holding a benefit concert on October 29th.

AirBNB is mobilizing its hosts to provide free housing for fire victims.

Wine critic Jancis Robinson has organized a California wine tasting in London on December 2 to raise funds. Details will be forthcoming.

Naked Wines has raised money from its immense customer base and has donated $50k already to the Napa Valley Community Fund.

Brooks Winery in Oregon is hosting a two day holiday market November 11th and 12th and 50% of admission proceeds will be donated to relief funds. Details will be posted soon.

Retailer Flatiron Wine and Spirits in San Francisco is holding a wine tasting of wines out of Magnum on Monday October 23, with proceeds going to charities supporting relief efforts.

The San Francisco Vintners Market on November 5 will donate 50% of its ticket sales proceeds to fire relief.

The Taste of Anderson Valley tasting in San Francisco on November 9th will donate 50% of its auction proceeds to fire relief charities.

Brutocao’s Mendocino Harvest Party on November 3rd will donate 100% of ticket sales to the Disaster Relief Fund for Mendocino.

Jack Winery designed T-shirts — the proceeds from which will go to help first responders who lost their homes.

Limerick Lane is donating 100% of the proceeds from one of its wines to fire relief.

Raymond Vineyards is donating proceeds from the sale of its Honoris wine to fire relief.

Tiny producer Reeve Wines is donating money by holding a raffle with some pretty cool prizes.

Red Car Wine Company is donating 50% of tasting room sales of the 2016 rose and 100% of the profit sold to wholesale for the balance of the year.

Many tasting rooms in Rutherford are donating fees from this weekend’s tastings (October 21st and 22nd) to charity.

Iron Horse Vineyards is releasing their Gratitude Cuvee and some of its proceeds will go to the Redwood Empire Food Bank.

On October 28th, Peterson Winery in Healdsburg will be having a party and raffle and wine sales event benefitting the Redwood Credit Union North Bay Fire Relief fund.

Occasio winery in Livermore Valley is donating 15% of their proceeds to fire relief for all the weekends in October.

J. Lohr winery is donating a portion of all its proceeds in tasting rooms and online sales to help.

Far Niente and Nickel & Nickel wineries are donating all tasting room fees to relief funds for an open-ended period of time. Apparently so are Miner and Alpha Omega.

During the month of November, Charles Krug winery is donating 20% of all proceeds to the Community Foundation Disaster Relief Fund.

Truett Hurst Winery will donate 100% of ticket sales and 10% of wine sales during their holiday open house on October 28th.

20% of Blackbird RosÃƒÆ’Ã‚Â© sold online will be donated.

Grassini Family Vineyards in Santa Barbara is donating $1 for every bottle of wine sold through November 15 to the Direct Relief Fund.

Flying Goat Cellars in Santa Barbara is donating $10 for every bottle of Pinot Noir Salisbury Vineyard 2011 sold through October 31 to the Direct Relief fund.

Chappellet is donating 10 percent of their wine proceeds in October.

I’m sure I’m just scratching the surface with the list above. Please post additional fundraisers you know about in the comments below. And then please participate in whatever way you can.

California wine has given so much to the state, and to wine lovers in general. Now’s the time to give back.