Long Road Ahead for Wine Country 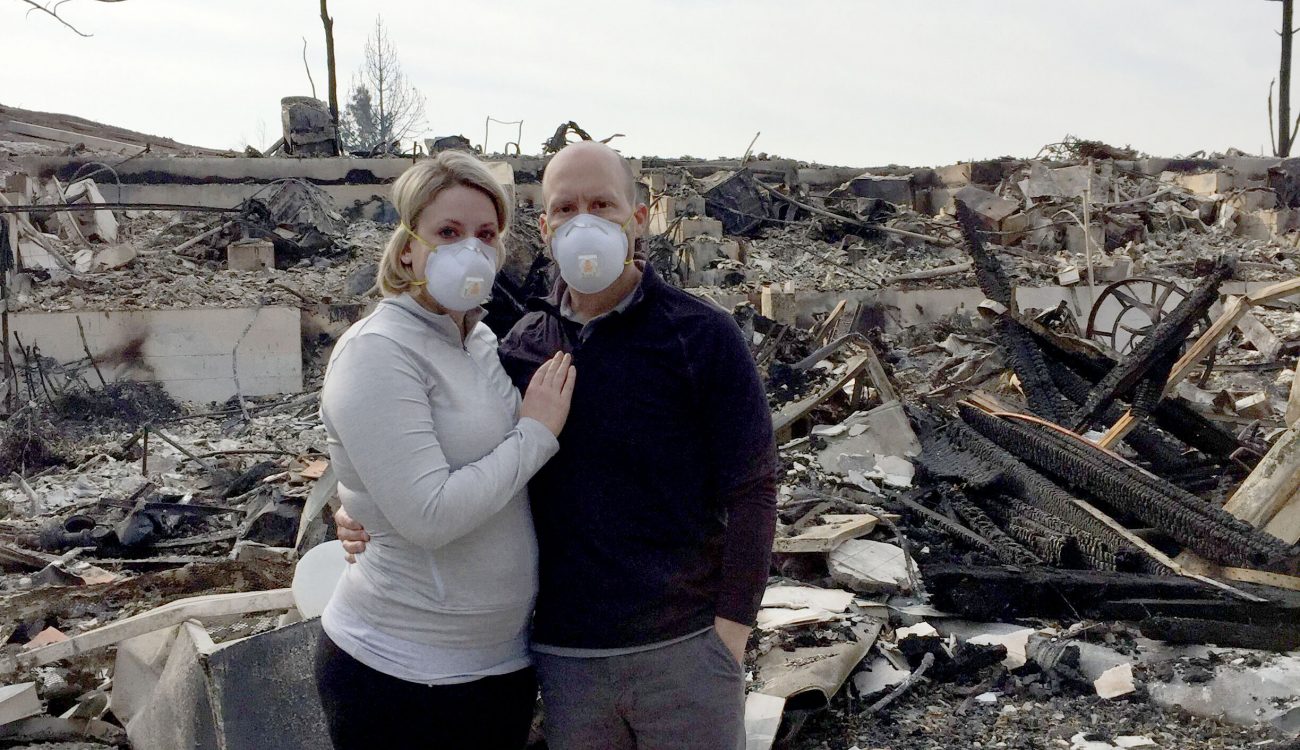 Do you live in London or nearby? Or do you have plans to be there in December? If so, I urge you to join Jancis Robinson on December 2 at the 67 Pall Mall Club for a special fundraiser benefitting California fire victims. Learn more about the event here.

On 8 October, Nick Solga and his girlfriend Katie Bower (pictured above with what remains of their house) were relaxing at home and getting ready to go to bed after a long day touring wine country with Katie’s parents, who were visiting from out of town. Their little French bulldog circled restlessly in their bedroom on the third floor of their townhome in Santa Rosa, California, as winds howled across their balcony outside.

Solga, who offers PR and marketing services to various wineries, recalled smelling smoke. ‘I asked Katie if she had blown out a candle or something, but she hadn’t, so we went out on the balcony and smelled smoke on the wind. We looked around to see if we could see any fire, but we couldn’t.’

The couple were nervous enough that they didn’t go to sleep. Instead they went out onto their street where many of their neighbours were doing similar investigations and gossiping quietly on the street at midnight.

‘There were college kids sitting on the back of cars and we asked them if they had seen anything, and they said they hadn’t but I remember them saying how eerie it felt, and I remember they were exactly right. It was just eerie. One of my older neighbours said he had never seen winds this strong in all his years living there’, said Solga.

Katie was worried enough that she called the Santa Rosa Fire Department. She was asked if she could see an active fire. She said no, and was admonished not to call the fire department unless there was an active fire.

‘We didn’t go back to bed’, said Solga. ‘It was 12.20 in the morning and we kept looking out the window, and I got onto social media and started poking around. I remember seeing a photo of a fire on George Rose’s Facebook page [George Rose is the photographer responsible for many of the images we have published recently – JR], and finding the first alerts about residents of Santa Rosa near Mark West Springs Road needing to prepare to take cover. But it was quiet in our neighbourhood. We got no alerts, and no calls.’

And then at 12.55 Katie called to Nick from downstairs. ‘”The moon is red”, she said, and I came downstairs to stand with her and watched it go from deep red to being completely obscured by smoke. Then I looked down and saw that there was ash accumulating on the back patio.’

‘We went back out front’, continued Solga, ‘and saw the orange glow over the hills behind where Paradise Ridge Winery was, and that’s when I decided we needed to get out.’

Read the rest of the story on JancisRobinson.Com. (free for everyone to read this week).