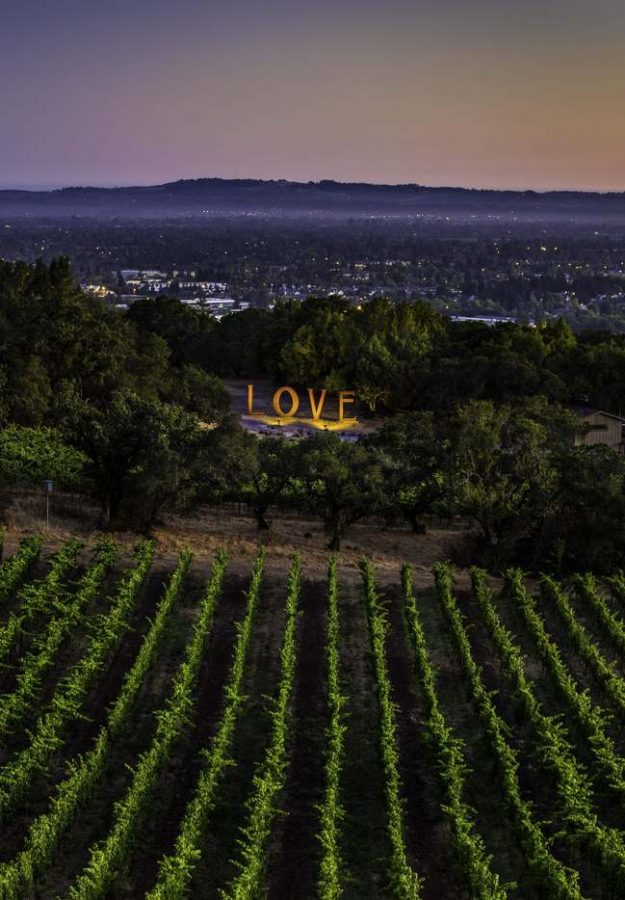 Even before the day fully breaks, the fields come alive. The first hint of light on the horizon brings with it a cacophony of song as the birds move from their night’s seclusion out into the vines. If the fog has settled in through the night, this time can be eerie, as rows of gnarled shapes slowly emerge through the brightening light. Or, in the absence of a marine layer, the vineyard shrugs off the night to glow in the colors of the season as the sun approaches the horizon and then slips its way into the day.

Frequently, as the sun pierces the fog or sparkles in the frost-laden grasses between the rows, George Rose is waiting, camera in hand, to capture something of the day’s beauty in first light. His quiet footsteps among the dark vines will startle jackrabbits, blacktail deer and the occasional stray skunk. The whisper of his shutter will be quietly noted by nearby raptors at rest or on the wing. He works in the light of the emerging day, capturing a row of vines on a steep ridge moments after they are struck by the sun; the droplets of dew hanging precariously from a newly unfurled leaf; or a perfect bunch of grapes moments before harvest. Later, as the sun rises higher, he will retreat and wait for the flattering light of evening, leaving the vines to do their daytime work, along with the busy hands that tend them.

Vineyards are notoriously difficult to photograph, as many a frustrated amateur knows all too well. The patterns of their regularity against beautiful surroundings easily fascinate the human eye, but once fixed on film or in pixels, what seemed a dynamic scene often becomes little more than gangly green lines on a flat plane. Capturing the beauty of a vineyard on a two-dimensional plane requires, among other things, an appropriate vantage point, a particular angle of light, and a keen sense for both the lay of the land and the graphic geometry embodied in endless rows of vines.

George Rose has been photographing the vineyards of California for more than thirty-five years, after opting for sunrise strolls between the vines instead of the frenetic pace of a newsroom and the over-saturated subject matter of Hollywood, rock & roll, and professional sports. The pages that follow will easily prove the wisdom of that choice, especially to anyone who loves wine and the places it gets made.

Beyond their beauty, vineyards have a deep significance for both the winemaker and the wine lover. Galileo famously described wine as “sunlight held together by water,” evoking the sense of alchemy that accompanies the flavors we find in the glass. More than 100 years before the discovery of photosynthesis, Galileo nonetheless understood the agent of that alchemy was the vine itself. The 1589 vintage he sipped in celebration of his appointment at the University of Pisa would undoubtedly have come from a specific place, and perhaps even a specific vineyard, thanks to a two thousand year-old understanding that the first thing you need to do if you want to make great wine is to plant the right vines in the right place.

Science has yet to fully unravel the intricacies of Chemistry, Geology, Botany, and Physics that combine to create what we know as terroir, but thankfully that hasn’t stopped us from enjoying it along the way. We may not know exactly how Riesling grown on steep slate gets its crystalline minerality, or why Cabernet Sauvignon builds such power and purity from a mix of gravelly loam and clay, but we’ve tasted enough of the results to be clear that something is going on, and we like it.

For many of us, the most profound expression we can find in wine is an expression of place. The transmutation of landscape into flavor has become the ultimate object of desire for both the winemaker and the serious wine drinker.

The farmer plants new vines, watching the ambitious young shoots of new growth make their way in the world, and supports the gnarled joints of vines planted by a previous generation, some outliving the hands that placed them in the ground. Without exception, the names of the world’s greatest vineyards are well known for their distinct voices that emerge from the glass despite the vicissitudes of vintage or any influence of the winemaker who shepherds the fruit from vine to glass. These are the wines to which we return, year after year for the latest chapter in a story bigger than ourselves. 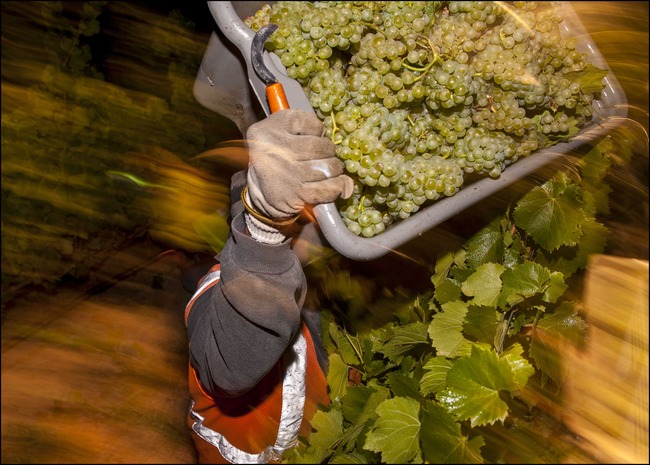 Despite wine’s transparency to its place of origin, the beauty that we apprehend in the glass remains a condensed representation of the circumstances involved in its creation. Unless we are the farmer–following the vines through the seasons day by day, moment by moment–we must stretch our imagination to read into the wine the snap of winter frost, the jubilant burst of spring budding and the languorous warmth of late summer ripening.

In our accelerating world filled with overwhelming competition for our attention and time, the moments in which we get the chance to contemplate the rhythms of nature become fewer and far between. We may appreciate everything a fine bottle may have to show us, but that is no substitute for walking among the vines themselves, rubbing the earth between our fingers, and smelling the chamomile and mint springing up between the rows.

This is why the images contained on these pages will never lose their appeal, even for those of us lucky enough to spend time in wine country. George Rose captures everything from the grand expanse of the landscape to the precious details of an individual vine with a vivid precision that rewards contemplation and celebrates the beauty of where wine comes from.

So grab a glass, sit back, and enjoy your trip into the vineyard.

The text above is the foreward that I wrote for a book entitled VINEYARD Sonoma County, by my friend and collaborator George Rose. Long-time readers will recognize George’s name as one of the photographers whose work I regularly feature here on Vinography.

When George asked me to write the foreward to a book that would essentially be his love letter to Sonoma County, I accepted immediately and with pleasure.

The book has finally been released, and it’s gorgeous. If you’re interested in a copy, you can buy one on George’s web site. A hardcover edition will run you $80 which includes shipping. 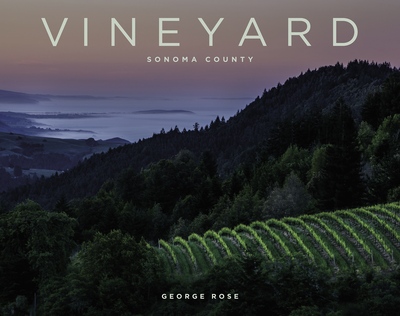