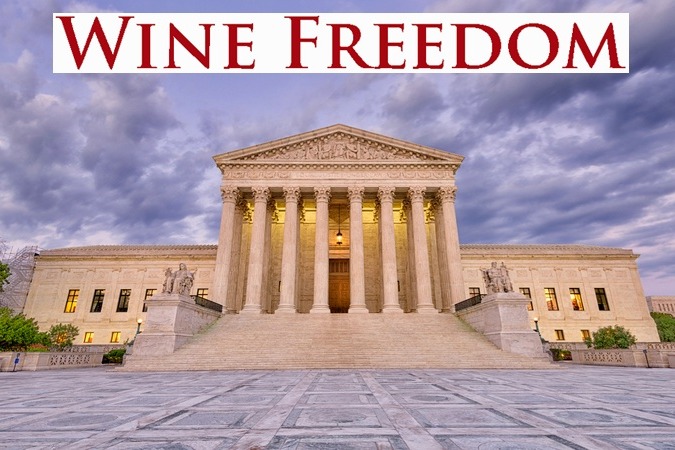 What’s the best thing a lawyer can do with your $20? Sounds like the beginning of a joke, right? But for right now, the answer is quite seriously this: try to convince the U.S. Supreme Court to let you buy wine when and how you’d like to.

For the first time in years, a case has made its way to the Supreme Court that deals with the (totally screwed up, antiquated, uncompetitive, inefficient, unfair and bullshit) laws that govern shipping wines to consumers across state lines.

These laws, put in place after the repeal of Prohibition, are byzantine relics of another age, one in which organized crime dominated the liquor business, and the moral compass of America was heavily anti-alcohol. Ratified on 5 December 1933, the Twenty-First Amendment to the United States Constitution contained the following statement: ‘The transportation or importation into any State, Territory, or possession of the United States for delivery or use therein of intoxicating liquors, in violation of the laws thereof, is hereby prohibited.’ Odd language, is it not, for an amendment that was re-legalizing liquor?

In that convoluted sentence, the Congress of the United States put the power to regulate the commerce of alcohol completely into the hands of the individual states, and paved the way for the complete nightmare that is America’s Three-Tier System.

How much of a nightmare? Well for 25% of America, it’s currently easier to order a gun over the internet than it is a bottle of wine? To buy wine in many states, you have to to make your way to a liquor store run by the state government, submit your state driver’s license for a background check, and in at least one state’s grocery stores, take a breathalyzer test before having the chance to shop a selection driven more by bureaucracy and the whims of distributors than by any sense of what you might want. In Connecticut, you can’t order more than 20 bottles of wine within a two month period, and in Arizona, you can’t have a winery ship you a bottle of their wine unless the winery can prove to the government that you’ve physically visited that winery first. These are just some of the ridiculous laws that vary across all 50 of our states, and force wineries, retailers, and consumers to spend millions and millions of dollars that they really shouldn’t have to spend.

Sure, we believe in the “free market” here in America. But when it comes to alcohol we are the land of subsidies, forced monopolies, and sweetheart deals. Thanks to the 21st Amendment, 19 states have a direct financial interest in, and control of, wine sales within their borders beyond the basic taxes that all states levy on alcohol sales. This control can range from a complete monopoly on wine sales via state-run stores such as in Montana, Utah and Alabama, to laws (in 12 states and several more specific cities) that prevent consumers from getting their wine shipped to them from retailers or wineries, even if the shipper is in the same state. In any other industry, the level of collusion between state governments and alcohol wholesalers, and the fiercely anti-competitive arrangements they put into place, would clearly violate federal anti-trust laws. But not so with state laws governing liquor.

Unsurprisingly, these laws remain fiercely defended by those who profit mightily from their existence – state governments and liquor wholesalers – even in the face of rising consumer outrage. The Wine and Spirits Wholesalers of America (WSWA) has spent hundreds of millions of dollars successfully convincing many state legislatures and national politicians that allowing wineries and retailers to ship wine across state borders would be tantamount to selling wine in toy stores, or handing it out free to teenagers on their way home from high school.

But let’s get back to the Supreme Court. It has recently agreed to hear a case known as Byrd v. Tennessee, which is essentially a challenge to the laws in Tennessee that say out of state retailers can’t sell wine to Tennessee residents. Or more specifically in this case, that Total Wine and More can’t set up shop in Tennessee without being a resident (presumably they mean the executives of the business) of the state for at least NINE years. While this is the specific point of contention in the case, the various court rulings that have thrown it all the way up to the Supreme court make it clear that this case is an opportunity to clarify what the Commerce Clause (which says that the Federal Government can regulate commerce among the states) means in the context of the 21st Amendment (which says, specifically, that the commerce of alcohol is to be regulated by the states).

As you may or may not know, when the Supreme Court hears a case, anyone can file an amicus brief, which is a legal document filed by someone not party to the case, but who may have a strong interest in the case. An amicus brief is filed to make the court aware of that strong interest, as well as to bring relevant information to light that the outside party believes is relevant to the case.

Which is why the National Association of Wine Retailers and the Wine Freedom advocacy organizations have started a GoFundMe campaign to raise a little bit of money to file such a brief. This is your opportunity to help make the voices of wine consumers throughout the nation heard by the highest court in the land.

Stand up for fair commerce. Stand up for wineries, wine retailers, and wine consumers, all of whom benefit from the free market working the way it is supposed to. Donate today.