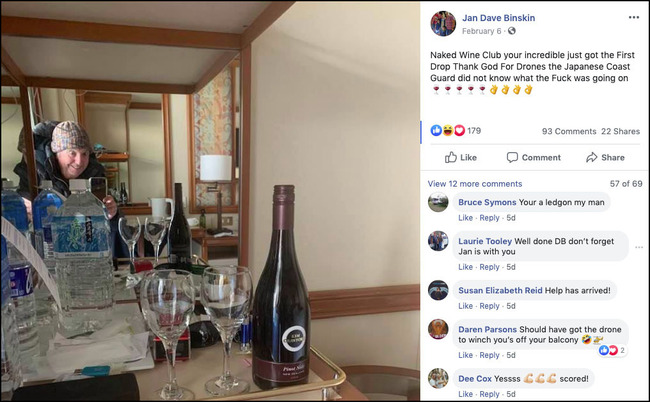 Most of us have been watching the Coronavirus disaster unfold like a slow moving train wreck around the world. It’s horrifying despite the (relatively yet) low death toll, and somewhat unbelievable when it comes to the crazy situations provoked by efforts to contain the virus.

Which brings us to the Diamond Princess cruise liner that has been quarantined in the Bay of Japan off Yokohama all week while they wait for the infection rate to drop to zero. It’s hard to imagine what it must be like to be in the 5th week of your one week cruise. It’s even harder to imagine that without any wine (supposedly all bars and restaurants on the ship have been closed and no alcohol is available as part of quarantine).

Which is why, like the rest of the world, I was quite tickled to see a news headline about an ingenious couple who managed to get their wine club to deliver some wine to them on the ship via drone.

So I tweeted about it and posted it on Facebook, suggesting that these folks, a couple named Jan and David Biskin might be my new heroes. 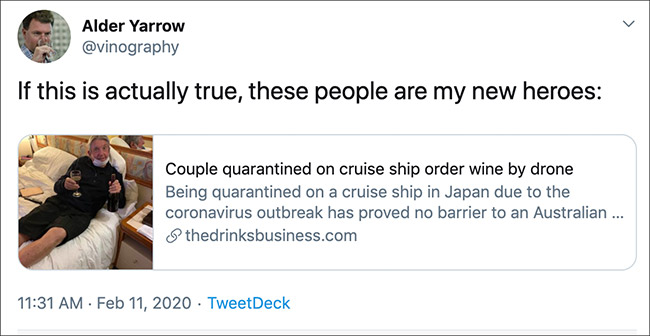 I was going to go even further and write a post here on Vinography about just how great they were, but as I thought about the story a bit more something began to stink.

In particular there are a few things about this story that don’t quite smell right.

PROBLEM #1
The couple, whose Facebook feed is completely public, publicly praise their wine club Naked Wine [sic] as they post photos of the bottles they are drinking in their cabin. Those bottles are Kim Crawford Pinot Noir, which is a major commercial brand that Naked Wines has never and will never sell to its customers.

PROBLEM #2
The couple is reported to boast about having two cases of wine delivered to them by drone aboard the ship. Leaving aside the maritime laws, terrorist threat concerns and the special circumstances of the quarantine that would likely lead to a drone hauling big packages towards a cruise ship to be shot out of the sky without a second thought, do you know how much two cases of wine actually weigh? Each case weighs, depending on bottle weight, clocks in at somewhere around 40 pounds. Yet the maximum payload capacity of most delivery drones being trialed at the moment by companies like Amazon and others is somewhere under 5.5 pounds.

PROBLEM #3
Most drone delivery is in the extremely early trial stages. I’m not aware of any commercial operation that is doing on-demand drone delivery, let alone at payload weights anywhere close to what would be required to deliver a couple of bottles of wine to someone, let alone a couple of cases.

PROBLEM #4
No footage of the wine being delivered. The Biskins seem to have smartphones and are highly engaged on Facebook. The temptation to take a video (or heck, even a photo) of their wine being delivered by drone would be too much to resist methinks. I know if I was in that situation and I was getting wine delivered by drone, I’d be live-streaming it without a second’s hesitation. When his friends ask for footage of the delivery, Biskin replies with “technical difficulties” and lots of laughing to tears emojis.

PROBLEM #5
David Biskin seems to be quite the jokester, at least according to his friends’ comments on Facebook. And some of the comments even seem to suggest that his friends are aware that Biskin has pulled a fast one with this story. 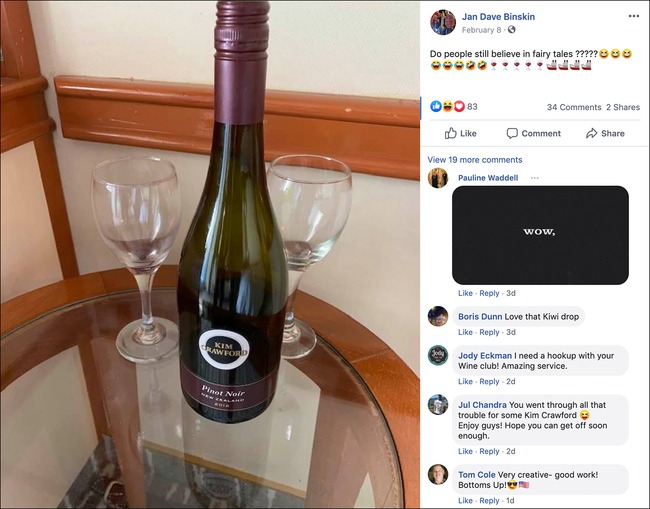 It was met with emoji-stuffed comments such as “Oh, yes, we believe everything you say” and “You have always been known for a good yarn, Dad,” and “Who would believe it knowing what a BS artist you are.”

One friend even wrote, “Shows just how phucken [sic] stupid our media are. Trust what’s in the papers. NO WAY.”

The story has now unfortunately been picked up by dozens of major news outlets.

So where did they get the wine? I’m guessing that they did what I would do if I was about to go on a cruise and didn’t want to pay top dollar for a bottle of wine on board: they brought it with them.

So until proven otherwise, I’m saying that this is a case (or two cases as it may be) of a lot of sloppy journalism, and the power of social media to amplify fake news that we all desperately want to be true.