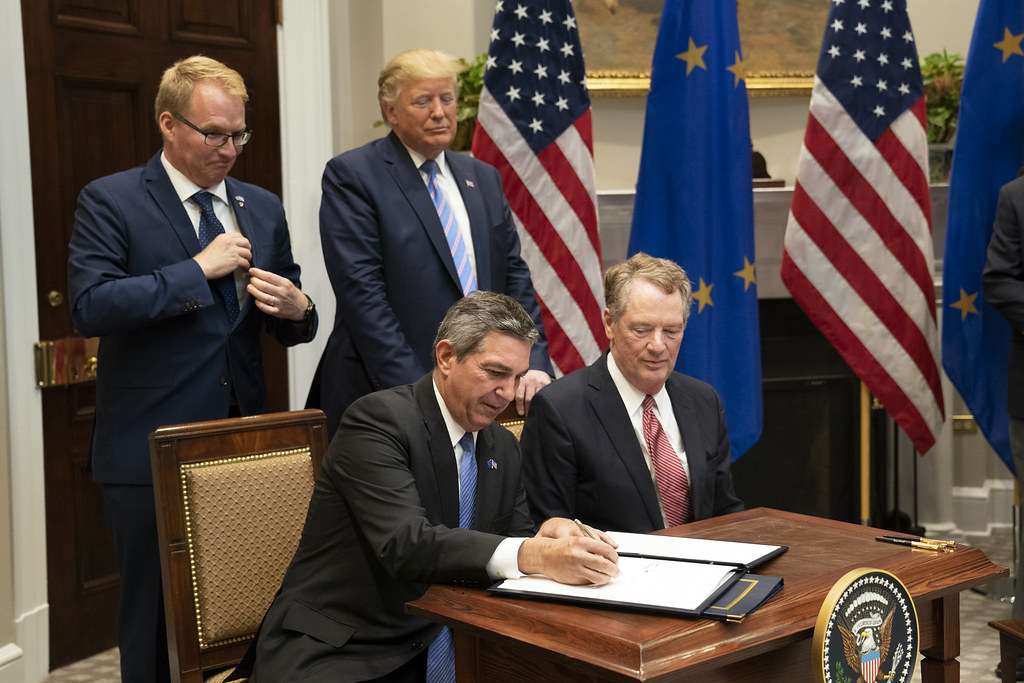 The US wine industry just received a bittersweet Valentine. On 14 February, the Office of the United States Trade Representative announced the decision to refrain from applying tariffs of up to 100% on wine and hundreds of other EU goods in response to illegal aircraft subsidies in Europe. (For some background, see Inside the US wine tariffs hearing and Alder’s subsequent explanation of the two separate US trade disputes threatening the wine industry.)

The reprieve, buried on page 5 of a notice issued by the USTR on Friday, reads as follows: ‘As of this time, the Trade Representative has decided not to increase the rate of additional duties above the additional 25 percent currently being applied to nonaircraft products.’

With those 28 words, the USTR (led by Robert E. Lighthizer, shown above seated in front of President Donald Trump and next to EU representatives) backed away from the single largest threat to the US wine industry since Prohibition. As part of the notification on this subject, the USTR noted the fact that it had received more than 26,000 public comments on the proposed trade action.

The day before the announcement, Harmon Skurnik, owner and partner in Skurnik Wines, a prominent importer in New York, had published an opinion piece in the Washington Post decrying the proposed tariffs and elaborating the danger they posed to the wine industry.

‘We are certainly relieved … but we’re not celebrating’, said Skurnik after the reprieve was announced. ‘Continuing to pay a 25% tax to the US government on the majority of wines we import from the EU can hardly be called a victory. Then, of course, this isn’t going away. The tariffs can be raised again six months from now, and the USTR also made it clear that if the EU retaliates, they reserve the right to increase on a moment’s notice. So, while we can breathe a little easier today, the fight is long from over.’

This article is my monthly column at JancisRobinson.Com, Alder on America, and is usually available only to subscribers of her web site. If you’re not familiar with the site, I urge you to give it a try. It’s only £8.50 a month or £85 per year ($11/mo or $111 a year for you Americans) and well worth the cost, especially considering you basically get free, searchable access to the Oxford Companion to Wine ($65) and the World Atlas of Wine ($50) as part of the subscription costs. Click here to sign up.