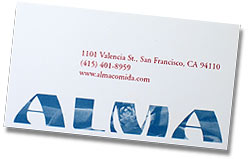 When the moors invaded Spain, they brought rice with them, and spices, and when they departed they left behind palaces, and a legacy of cooking that developed over the next few thousand years, until it was imported, along with misfortune to the Americas. There it stewed, on the central and southern continents with new ingredients lent to it by native diets, Portuguese traders, and Africans in the Caribbean, slowly evolving into the many facets gathered together under the approximate banner of Latino cooking. Back in Spain, cuisine continued to evolve as well, pushed in new directions by the French and the rest of Europe. If you’ll forgive me this oversimplifying, reckless condensation of three thousand years of complex culinary evolution into one paragraph, let’s just say these two streams of culinary evolution are now highlighted in what we in San Francisco call “Nuevo Latin” cooking.

I can’t claim to be much of a trend spotter, but it seems that while six or seven years we were enjoying a movement of Southeast Asian fusion with the likes of The Slanted Door and Ana Mandara, we are now fully engaged in a surge of Nuevo Latin expression.

One of the original forays into this realm, and still perhaps one of the most consistently pleasing and fresh is Alma. Well known to the young crowd that prowls the intersections of 22nd and 16th with Valencia Street, Alma delivers a focused and creative menu in a warm and comfortable setting that makes it both a perfect place for a dinner to catch up with some old friends or for a fun date.

Initially the restaurant appears small and intimate with its plaster walls gracefully curving towards the ceiling in proper Mediterranean style and its modest but gorgeous wooden and wrought iron bar in the front room. You may be surprised though, to be led out of this room and through several small archways that serve as gates to the other rooms of the restaurant and ultimately the kitchen. I love to sit in the back room where you can hear and see a bit of the front room and feel like you are hidden away in a Spanish daydream.

You may indeed think you are dreaming as the meal unfolds into a series of mouthwatering flavors that play with the best of the cuisines of Peru, Mexico, Spain, Basque country, the Caribbean, and more that I probably don’t recognize. I suggest starting with one of their ceviches or even better, with their ceviche sampler that combines a bit of each of their nightly selection, along with perhaps their green plantain dumplings with asparagus, roasted shallots and wild arugula. If you didn’t have one of their signature cocktails while you waited at the bar for your table, you might want to try one with an appetizer. You can’t go wrong with their spiced rum Mojito or their Cola de Mono (monkey’s tail) which is like a Mexican chocolate martini infused with cinnamon and coffee.

Don’t fill up on the luscious drinks and sparkling fresh seafood appetizers because you need to save room to tackle their Churrasco-style pork chop with garlic scallion mashed potatoes, jicama-cabbage slaw and smoked chili jus. If you’re not feeling up to that large charred piece of juicy goodness, perhaps you can choose from a grilled California yellowtail with onion-sweet chili relish, or a chipotle barbecued duck breast with mashed plantains. These are powerful, penetrating flavors, some spicy, some deep and savory, each refreshing and new. The food is pretty, but not sculpted — you wouldn’t want it to be ” the flavors would seem contrived with a too-fancy presentation.

The service too, is perfectly competent and warm (although occasionally a little slow to get you started) but not formal. The corkage is average for the area ($15) and the wine list appropriate for the cuisine, offering a decent selection of white and light red wines by the glass and a mixed international set of bottles that all fall in the $25 to $45 dollar range. This is a great restaurant to bring your own bottle to, especially if you’re fairly confident about the pairing of your wine with the food, and the staff know what to do with whatever you bring.

Be sure not to leave without dessert, in particular I urge you to indulge in the pastel de leche, a bit of cake which is drenched in aromatic sweet cream and scattered with strawberries about a dish that you will have to restrain yourself from licking clean. I consider myself to have a fair amount of self control, but I really have to fight not to order two of these each time I go.

Alma means “soul” in Spanish but you’ll need no reminder from the big bubble letters that wrap the entrance to this hideaway ” this food might be trendy, but it’s definitely good for the soul.

Reservations are recommended Thursday thru Sunday, but if you forget, you’re likely to get a table after a couple of drinks at the bar. Parking in that area is a nightmare so take BART or a cab if you can.