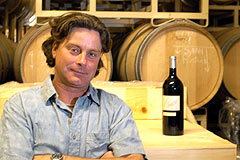 One wouldn’t necessarily be immediately attracted to a wine that has been dubbed “a bastard blend” yet that is what L’Aventure owner and winemaker Stéphan Asseo affectionately calls this wine. His choice of that nickname is both intentional and meaningful, coming as he does to Paso Robles from 17 vintages as a winemaker in Bordeaux to which he came after having been trained in Macon, Burgundy. Asseo has set down roots in Paso Robles and rather than make wines in the local Rhone style or any of the styles prescribed during his years in France, Asseo has gone about making wines that have little precedent but a lot of presence.

Asseo arrived in the rapidly up-and-coming Paso Robles wine region in 1998 with his family after considering Spain, Australia, South America, and South Africa. A transplant from St. Emilion, Asseo is deeply steeped in the traditions and nuances of terrior from his substantial career there, and he has continued to make that a focus of his efforts here in the New World. He has carefully selected previously unplanted land on the West side of Paso Robles and laid in vines of Cabernet, Mourvedre, Grenache, Syrah, Petit Verdot, Chardonnay, and Rousanne.

This mix of vines in the field is important to Asseo, who tries to focus on the power that blending can bring to his wines. After the wines are finishing in barrels (varietals fermented separately) he makes dozens of different blends with the grapes and then tastes them blind — at first by himself and then with other winemakers and friends before arriving at the blends for his various wines, some of which stay in the L’Aventure label, and some of which are bottled under his second label: Stephan Ridge.

This particular wine is a blend of 47% Cabernet Sauvignon, 45% Syrah, 5% Zinfandel, and 3% Petit Verdot and weighs in at 15.4% alcohol. Like all Asseos wines, it is picked by hand from vineyards restricted to a maximum of 2 tons per acre of fruit, 100% hand destemmed and fermented in 100% new French oak, where it rests for 15 months before bottling without fining or filtering of any sort.

Tasting Notes:
This wine is a dense medium ruby in color, with very heavy extracted color — mere millimeters from the edge of the glass it plunges into an opaque dark redness that portends good things. It sports aromas of black cherries and coffee with a hint of black truffles. In the mouth it is luscious and silky with primary flavors of blackberry and black cherries with hints of dark chocolate. Nicely balanced with a decent acidity and soft enveloping tannins, the wine tapers to a lasting finish that brings in flavors of black tea.

Food Pairing:
This wine paired nicely with the steak au poivre, roasted rosemary potatoes, and charred asparagus that we prepared for dinner last night. Its mellow tannins mean that it will accompany a range of meat and tomato based dishes.

I get mine through Porthos.