Thoughts On The Occasion of Turning One 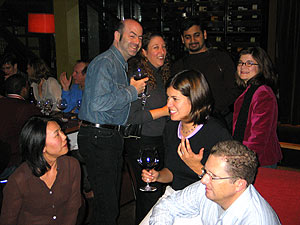 One year ago yesterday I embarked on a project to catalog my wine and food adventures in an informative way. To create a record for myself of where I ate and what I drank and at the same time provide recommendations to the growing number of friends that looked to me for such things. I was interested in the blogging phenomenon, and it seemed like a good form for my notes. At the time there were two blogs on the Internet that dealt with wine, neither of which had been updated in months when I started posting.

I had little idea of what I was signing myself up for, or rather, what I would end up turning it into.

Here I am a year later, the owner of Vinography™, thousands of readers strong and growing. I have written almost daily about food and wine for an entire year: over 40 detailed restaurant reviews, roughly 200 individual wine reviews, around 170 other posts ranging from news topics to editorials, and nearly 700 comments on all of these from you, dear readers.

I have also been joined online by dozens of wine blogs now, adding individual voices to a lively wine community online, one that is starting to attract attention from the mainstream.

The past year had many highlights for me. I was, of course, pleased and honored to be featured in Bon Appetit, to win a 2004 Food Blogging Award, and to be praised in the Sacramento Bee.

I’ve also enjoyed just the process of writing, finding out what matters to me to write about, and have been proud of many pieces that I’ve put up here. Here are a couple of my favorite posts: