Courtney Kingston’s American grandfather sailed to Chile on a quest to find copper and gold. He found a lot of the former, and very little of the latter, but stuck around nonetheless, and became a beef and dairy rancher in his later life, farming the very land parcels that he once prospected. Three generations later the family is still on the farm, and instead of cattle, the family now grows grapes in what, over the years, has been established as the westernmost part of the Casablanca Valley appellation of Chile.

The switch from ranching to winemaking wasn’t an easy nor expected move for the family, and largely came at the urging of daughter Courtney, who landed on the idea after spending some time consulting for the wine industry with Deloitte and Touche after her graduation from business school in the US. When she brought the idea to her family, they initially dismissed it as another “cheddar cheese” venture, referencing her grandfathers infamous failed attempts to create a Chilean version of the American staple, and invoking what has become a family warning against overzealous entrepreneurism.

Eventually, however, Kingston prevailed and the family embarked on a quest for an American partner to work with in the business. After courting several big name wine companies and the near completion and collapse of a deal for a joint venture, the family decided to go it on their own, and using the research developed during the partnership search, entered the grape growing business. They haven’t looked back. 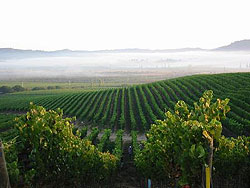 The family planted grapes in 1997 and started selling them in 2001 to others, and has just made their first vintage, which represents 5% of their production (the rest is contracted out to other winemakers big and small).

The Kingston Vineyards estate is planted with Syrah, Merlot, Sauvignon Blanc, and in a rare move for Chile, Pinot Noir. Apparently a wine consultant that was hired to help them do the planting noted how well the soil, the topography, and the weather would suit the grape, and perhaps not knowing any better, the Kingstons went ahead and planted. From my tasting notes below, it should be clear that this may turn out to be a brilliant move.

For winemaking help, Kingston turned to Byron Kosuge, formerly of Saintsbury and currently the winemaker at Miura Vineyards. Kingston and Kosuge together have crafted a vision for the winery modeled after wineries like Bien Nacido and Pisoni, with a goal of growing extremely high quality fruit to both support small quantities of vineyard designate wines from the estate, and to sell to other winemakers to do the same.

This is their first commercial vintage for all of these wines, and by my reckoning, a very strong showing out of the gate.

2004 Kingston Vineyards “Cariblanco” Sauvignon Blanc, Casablanca Valley, Chile
This wine is a pale gold with tinges of green in the glass and sports aromas of fresh cut grass, crushed stones, and tart raw quince fruit. In the mouth it is fresh and crisp, with good acidity, and has primary flavors of unripe apples, crabapples, and flint. The wine is also just slightly sweet as if it has the tiniest hint of residual sugar, and I felt this fought against the rest of the wine, leaving it ultimately a little unbalanced, though definitely tasty, and with a decent finish.

2003 Kingston Vineyards “Alazan” Pinot Noir, Casablanca Valley, Chile
Medium garnet in color, this wine has a gorgeously perfumed nose that is typical cool-climate Pinot Noir, with aromas of cranberry and raspberry mixed with light floral scents. In the mouth, the wine doesn’t quite live up to the promise of the nose, though it provides nice flavors of raspberry, unripe plums, and herbs that transition to a slight astringency in the finish. The wine has some good structure to it, but I thought it was a little weak in the mid-palate, and wondered if this and the astringency were the result of just very young vines.

This wine is a deep, opaque purple in the glass and has a remarkable nose of wet earth, smoked meats, and black cherries and blackberries. In the mouth it is all Old World romance, with gorgeous flavors of woodsmoke, wet earth, blackberries, and a hint of exotic spices. If I were tasting this wine blind I think I would have pegged it for a Syrah from the Languedoc or Minervois. It has a very distinctive and very pleasing flavor profile, and I’m betting it will age fairly well. The fact that this is the first vintage for this wine is remarkable, and speaks to both the potential of the vineyard as well as the talent of the winemaker.

The day after this tasting the wine had lost some of the earthier elements and moved into a briary blackberry flavor profile, and was not as rich and nuanced as day one in my opinion.

To purchase any of these wines, please contact Courtney Kingston at the winery: (650)-599-5812. The winery’s web site also has a list of places where the wines are sold and served in the united states.