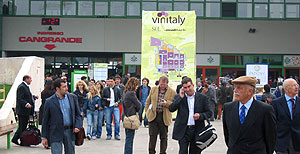 Record facts and figures equally confirm the “status” of the show this year – 4,210 exhibitors compared with 4,047 in 2004 over an area of 74,300 square meters. The Exhibition Centre now offers a further 10,000 square metres to accommodate exhibitors that were previously on the “waiting list.”

As in past years, it is easy to sense mixed feelings among the booths of the exhibitors: most producers have a sense of accomplishment in the last 10 years, with stellar profits and higher prices year over year, but everyone seems to express the feeling that the market has reached a turning point. Italian wine exports have seen a new positive trend, with value in 2004 at 2,487 million Euro (+5% in value; +6% in quantity), but a full 50% of Italian production goes to just two countries – Germany and the United States.

This means that our system still suffers from poor penetration in countries where consumption is growing. Such poor penetration of Italian wine is undoubtedly due to the fragmentation of the Italian 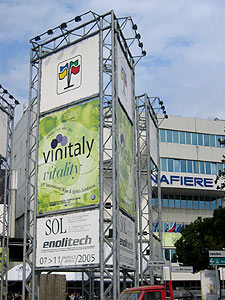 production system – where the 5 largest companies generate only 5% of turnover in the wine sector. And if company dimensions cannot be expanded to create a critical mass for stronger international status, then we must work towards joint promotion.

In my coverage of Vinitaly for Vinography, I am going to pay particular attention to “alternatives” — new and different ideas in the marketplace. One of the clear “alternatives” already evident from walking around and meeting people is that young people and in particular, young women are taking control of the business. It seems that the time has come for the older wine generation to make room for sons and daughters — younger managers driven by passion for quality wines and skilled in several disciplines (business admin., agronomics, information technology, etc.). These young people are starting to transform the way their fathers made wines. It’s good news for all of us.

The second “alternative” I’ll mention today is a trend towards exploring less traditional varietals and wines as an alternative to old standard like Brunello di Montalcino (Sangiovese) or Barolo (Niebbolo) or the Super Tuscan blends of Cabernet Sauvignon or Merlot.

One great example of new explorations is the Sagrantino di Montefalco DOCG, from the wonderful region of Umbria, right in the center of the country, close to the city of Perugia. It is not really new, per se, considering that first news about Sagrantino di Montefalco dates back to 1524. After centuries of stagnation in local pubs and homes, in recent years some local producers started to invest on their own, stimulated by the roaring growth and wealth of neighboring producers in Tuscany.

Thanks to the kind hospitality of Mr. Luigi Bonifazi, director of Consorzio Tutela Vini Montefalco, the local association among producers, we learned that Sagrantino di Montefalco was identified by a recent scientific study as one of the world’s the richest wines in terms of polyphenolics, which are a required element in all great red wines. 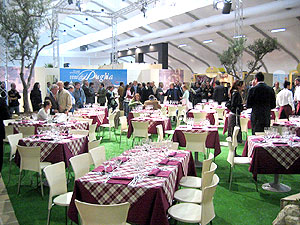 Investments in scientific projects focused in quality improvements in all processes from grapes-to-glass are now paying back the initial efforts of local farmers. Sagrantino has a bright future due to its enormous potential for high quality wines.

We tasted a few wines from the Sagrantino DOCG in Umbria:

Montefalco Sagrantino 2002 Scacciadiavoli. one of most ancient producers in Montefalco (Scacciadiavoli means “exorcist”, probably on duty at the ancient village) produces one of the most interesting Sagrantino of the area. Score: 8.5. Cost: $ ?

(Prices are retail consumer prices from the winery. VAT 20% included).

If you are interested in these wines you can get more information from the Consorzio Tutela Vini Montefalco.