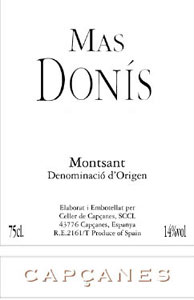 As far as Spanish appellations go, Montsant is a bit of a baby — small and young. Only established in 2001, after being pulled out as a distinct D.O. (Denominacion de Origen) from the larger Tarragona region that surrounds the famous Priorat, Montsant now rings the Priorat, a concentric circle around its famous forbearer, roughly 100 miles south of Barcelona, Spain.

The Montsant region is marked by old volcanic slopes of nutrient poor, mineral rich soils covering granite and slate, and little rainfall. The primarily Grenache vines (along with Tempranillo, Cabernet Sauvignon, Syrah, and Carignan) in the area must send their roots deep into the ground for water.

Perhaps the most famous producer in this region is the Cellar de Capçanes, a collective of over 120 growers in the region that has recently gathered much acclaim from critics for producing high scoring wines at rock bottom prices. But before a bottle landed on the desk of Robert M. Parker, Jr. the wines Capçanes were more likely to be found in synagogues than anywhere else.

Ironically for a country dominated by Catholicism, it was the need for a high quality kosher wine in the Barcelona market that launched the success of the Capçanes collective. The collective was started in 1933, and mainly provide bulk wine to some of Spain’s larger producers until 1995. Who knows what shrewd businessman made the case for trying to serve the Jewish Kosher market in Spain, but the collective decided to make the significant investment in new equipment required to produce the kosher wine and has never looked back since.

80% Grenache and 20% Syrah, this wine is made from some of the older Grenache vines in the roughly 600 acres owned by the collective. The wine is fermented in steel and then aged in American oak barrels (30% new) and is bottled unfiltered.

Tasting Notes:
The wine is a medium ruby in the glass, and has a nose dominated by sweet oak and bright cherry aromas. In the mouth it is medium bodied with dusty, light tannins that envelop primary flavors of sawdust and cherries which fade to a slightly mineral finish of moderate length laced again with sweet oak. Perhaps a few too much oak flavor in this one for my taste, but an awfully good wine for the price.

Food Pairing:
The dusty fruit of this wine will go very well with the bright fresh flavors of this tomato goat cheese tart.