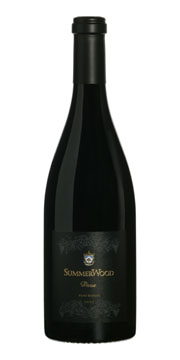 If there is one “hot young” wine region in California, it would have to be Paso Robles. For the last few years, wines from this area of the Central Coast have been popping up everywhere, and many of them are meeting with critical acclaim.

The winery employs the young winemaker Scott Hawley, who only recently graduated from the Enology program at Fresno State University, but who is already establishing himself as a solid winemaker.

Under Hawley’s direction, the estate produces very small quantities (100 – 500 case lots) of Rhone and Bordeaux style wines. The winery sources its fruit from various places around Paso Robles, but Scott has a particular focus on the cooler “Westside” of the area, which has some of the highest temperature shifts from day to night of any wine growing area of the state — sometimes as much as 50 degrees. The current Summerwood portfolio includes a white Rhone blend of Roussanne and Viognier (which I tasted at this year’s Rhone Rangers), a Cabernet, a Syrah, a Chardonnay, a Viognier, a Zinfandel, another red blend, and a Port.

Hawley appears to have a large budget for technology, and uses it to full advantage, whether it’s state-of-the-art tanks or arrays of wireless solar moisture sensors in the vineyards. Luckily the use of all this technology hasn’t resulted in sterile wines. Hawley bottles unfined and unfiltered, and works in small enough quantities to carefully tailor his use of oak to different lots of wine.

This particular wine, which interestingly isn’t labeled as Syrah, even though it could be by law, is 97% Syrah, 2% Grenache, and 1% Roussanne. Hawley says that he adds the Grenache for its higher acidity and bright fruit notes, and the Rousanne for a silkier texture. The Syrah comes from two vineyard locations, the Denner Vineyard and the Lock Vineyard, both in the Templeton Gap area of Westside Paso Robles. The wine is aged in a combination of French, Hungarian, and American Oak for 18 months before bottling, and weighs in at 14.9% alcohol. 284 cases are produced.

Tasting Notes:
A medium to dark purple color in the glass, this wine has a strong nose of blueberries, blackberries and vanilla. In the mouth it is initially packed with flavors of mixed spices, but then quickly becomes lush with black cherry and blackberry fruit and hints of chocolate. It has light, soft tannins, and a decent balance to it, with a reasonable finish. Missing a little bit of depth and complexity to be a blockbuster, but nicely restrained definitely not a fruit bomb.