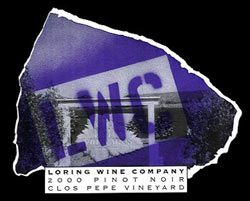 Brian Loring has shot to prominence in the last 4 years as one of the hottest young winemakers in California. His down to earth approach to wine, access to some of the most revered Pinot Noir fruit in California, casual humor, and some very high scores from the critics have propelled his wines to remarkable popularity in a very short period of time.

The wine world discovered Brian Loring only a short time after he discovered his own identity as a closeted winemaker. Brian worked in the retail end of the wine business during and after college and there discovered the wines of Burgundy, which quickly became an obsession. His interest in Pinot Noir prompted him to turn to local California producers, which he says he found “less than satisfying.”

His quest for good California Pinot Noir continued as he established himself in a career as a software designer in Southern California.
When he did finally find a producer or two that made Pinot in California, Brian says he basically made enough of a nuisance of himself with “10,000 questions about winemaking” that one of them, Norm Beko of Cottonwood Canyon, invited him to come observe the 1997 harvest. Observation turned to participation, and before he knew it Brian was not only trying his hand at most parts of the winemaking process, he was making two barrels of his own Pinot Noir.

That 1997 harvest was the veritable first day of the rest of Loring’s life. He was hooked, and what might have only been the briefest building fantasy of one day being a winemaker was suddenly a imminent reality.

The Loring Wine Company’s first commercial vintage came only 2 years later, and was 150 cases of 1999 Pinot Noir made from Norm Beko’s “Sharon’s Vineyard” named after his wife. His very next vintage (of which this wine is an example) in quantities of only 270 cases, earned 90+ point ratings from some of the major critics, and overnight Brian became somewhat of a superstar, or what passes for one in the winemaking world. Subsequent vintages have sold out more or less instantly, an amazing feat given that Brian was basically a self-taught winemaker with at most only three vintages under his belt.

His ratings have only gone up, and perhaps his continued success has helped calm Loring’s fear of being a one-hit-wonder. He now makes close to 3000 cases of single vineyard Pinot Noir from various vineyards around California, including Gary’s Vineyard and Rosella’s Vineyard in the Santa Lucia Highlands, two of the hottest vineyard sites for Pinot Noir in California. Despite his modesty and lack of any formal training, he clearly knows what he’s doing when it comes to making Pinot Noir.

Brian forges particularly close relationships (as do many winemakers) with the growers who supply him with grapes, though to my knowledge, he is the only winemaker who actually has featured photos of the growers on his labels. Unlike many winemakers, however, Brian provides no instruction, guidelines, or requirements for the people growing his fruit, other than to pick his vines at the same time they pick their own. “Not only am I looking for the right soil, micro-climate, and clones, I’m also looking for a grower with the same passion and dedication to producing great wine that I have. In other words, a total Pinot Freak!” says Loring on his web site. “My part in the vineyard equation is to throw heaping piles of money at the vineyard owners (so that they can limit yields and still make a profit) and then stay out of the way….Given this approach, the wine that I produce is as much a reflection of the vineyard owner as it is of my winemaking skills.” It’s a recipe that has resulted in some very spectacular wines.

This wine is from Loring’s second vintage, and came from grapes grown at Clos Pepe vineyards in the Santa Rita Hills area of Santa Barbara County, near Lompoc. Like all Loring’s wines it was aged in French oak (50% new), and bottled unfiltered.

This is the earliest vintage of Loring’s wine that I have had (I’ve tasted his ’02, ’03, and barrel samples of his ’04 I think), and it may very well be my favorite. Despite being lighter in body than most of his wines, I found it nicely balanced and slightly restrained. I don’t know if this is a good indication of the aging potential for his wines, or just the style of this particular vintage. Perhaps it is a bit of both. Certainly subsequent vintages have been a bit more fruit-forward in style.

Tasting Notes:
Light to medium ruby in color, this wine has a fruity nose of cool cranberry, raspberry, pomegranate aromas. In the mouth it is smooth and lighter in body than typical for Loring’s wines. It is excellently balanced, however, with primary flavors of raspberries, cassis, and cranberries with delicate tones of earthiness that envelop a surprisingly long finish given the weight of the wine.

This wine can occasionally be found for sale on the Internet.