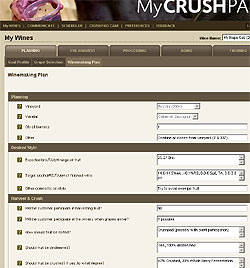 We live in a world of remote technological gratification, where we can outsource our own jobs to people we watch over with webcams while we spend our time blogging, selling advertising to people we’ve never met, and serving it up to still other strangers. Hmm. Why didn’t I think of that?

In an age where it seems possible to do just about everything from surgery to grocery shopping by remote control, it was only a matter of time before winemaking became as accessible and as easy to exercise as our carjacking fantasies that get played out in Grand Theft Auto II.

Enter Crushpad, the year-old start-up business here in San Francisco that aims to make it easy for ordinary people to make real, even commercially viable wine. I’ve covered the bases on the basic business premise in a previous story, but recently Crushpad has launched something quite extraordinary: a complete web based interface to the winemaking process from fruit selection to bottling and packaging. Now all those really bored, really cold people at the research station in Antarctica can make wine during the endless daylight of our winter (their summer).

Remote virtual winemaking begins by logging into www.mycrushpad.com and filling out a form describing the style of wine you want to make — your sources of inspiration, particular varietals you’re interested in, how much you want to be involved in the process (from virtually none, to actually punching down the cap yourself four times per day).

Moving on from there, you actually have the opportunity to do vineyard and varietal selection. One of CrushPad’s big selling points is that they have negotiated contracts with some pretty amazing vineyards, the same vineyards that many of the small, estate-less winemakers that I feature here on Vinography buy fruit from. The web interface let’s you see the location (but not the name — you don’t get that until you pay) of the vineyard, information about its geology, exposure, clones, age and varietals. 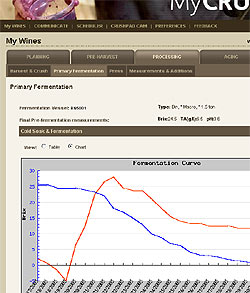 and eight thousand dollars per barrel) various decisions must be made and input into the system that will govern what happens as the grapes are harvested: what brix (sugar levels) the grapes will be picked at, whether they are to be picked and sorted by clonal varieties, whether to destem partially or fully, and more. Additionally, the various details of the winemaking process can be input into the system, such as whether native or added yeasts will be used, whether the grapes will receive a cold soak, whether and how often the cap (the skins that float to the top of the crushed juice) will be punched down (mixed into the liquid) during fermentation.

Presumably, the first-time winemaker can make as many of these decisions as he or she desires or has the knowledge ” each specification is transmitted to the team at Crushpad who will offer suggestions, expertise, and guidance based on the desire of the client.

For those winemakers in remote locations (e.g Antarctica) who don’t have the ability to fly into town (or drive across town) during crush and winemaking , the system offers a readout of key data points such as temperature, alcohol levels, acid levels, and more. There’s even a web cam for those who want to watch the action from afar.

Once the wine is made, apparently there’s even a web interface for uploading your own label artwork, and presumably some time in the future, for putting your wine up for sale. That is, of course, presuming you don’t want to hoard it all and send it to friends every year as a Christmas gift. At least you’ll be able to say that your gifts keep getting better every year.