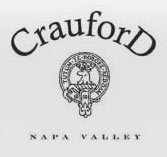 The CrauforD Wine Company began as a conversation over dinner. Marilyn “Mama” Crawford Anderson sat at the dinner table and looked around at her daughter, a working winemaker, and her daughter-in-law, an accomplished viticultralist and vineyard manager. “There’s just too much talent at this table for us girls not to be making our own wines,” she said. She would know — she and her husband were the founder and owners of Monticello Vineyards for years. Apparently a little encouragement and support from Mama Crawford was hard to ignore, especially when it came with a bit of start-up financing. So by the time dessert rolled around, it was decided: the women of the Crawford and Corley families decided they would have a little fun, and put their collective experience and skills to work.

Their first picked vintage was a tiny lot of Cabernet, but their first released wine was about 70 cases of Sauvignon Blanc, with every bottle filled, labeled and corked by hand. Now in its 5th vintage, and slightly more automated thanks to the use of a custom crush facility, CrauforD hand crafts a little bit of Zinfandel, a little bit of Cabernet, and some of this Sauvignon Blanc. Julianna Corley, putting her 12 years of viticulture to work, manages the vineyards, while her sister-in-law Carolyn Corely is the winemaker, advised at times by her husband Chris Corley, who currently makes wines for Corley Family Vineyards (which has taken over the Monticello label).

“We started this project to have some fun,” says Julianna, “and we wanted to keep things simple. We wanted to make reasonably priced wines — something we think is hugely important in this valley. There are some magnificent wines in Napa, but many will run you $120 a bottle. We want people to be able to easily take our wines home, and when they’re done we want them to say ‘wow, that was totally worth it.'” That first dinner table conversation took place shortly after 9/11, and the drop in spending also helped emphasize the need for reasonably priced wines. “We’re not doing this to make a lot of money,” says Julianna, “we’re not going to go out and make a reserve wine just for the extra bucks we can tack onto the price.” Indeed, the wines are priced using the “old farmer’s tally” method — to figure out how much each bottle should cost, the ladies simply divided the cost of each ton of their grapes by 100.

Of course that hasn’t translated into totally rock-bottom prices, mostly because the grapes that Julianna has access to are some of the best in the business. Their Cabernet and Sauvignon come from the Maroon Vineyard, an easterly facing vineyard on the back side of Howell Mountain managed by Julianna as part of her work for Renteria Vineyard Management. From this 22 year-old vineyard Julianna gets her choice of a few blocks of Cabernet which sit just inside the Howell Mountain appellation, and a few blocks of Sauvignon Blanc which fall outside of this zone, requiring the wine to be labeled as just Napa Valley. From farther east, in Chiles Valley, CrauforD sources a small amount of Zinfandel from the famous Brown Estate Vineyards. When I asked Julianna how they managed to get their hands on some of the best Zinfandel grapes in the business she laughed and told me that she met her husband at Dave Brown’s house. Well, then.

CrauforD is now producing what they feel is their maximum capacity of about 3500 cases of wine, with just over half of that being this Sauvignon Blanc, which they have affectionately named “The Highlander.” Each of their wines receives a name honoring Mama Crawford’s Scottish homeland, which is responsible for the coat of arms and unusual spelling of “CrauforD” on the bottle. My favorite name is given to their Zinfandel, which they call “The Kiltlifter.” These ladies only take the important things seriously. “We don’t want to get bigger than 3500 cases, and we don’t want to build and own a winery,” says Julianna. The wines are not sent out for review by the major publications, nor are they sent to critics, which might explain why they’re still very much under the radar even after 5 vintages. None of the three ladies are interested in the politics of the wine industry and the stylistic restrictions that come with the numerical ratings system.

Influenced heavily by Julianna’s background in viticulture and grapevine genetic research for Mondavi and Opus One, each of the CrauforD wines is treated primarily as an expression of the particular vineyard from which it comes. Oak is kept to a minimum on all wines, and when used it is strictly tailored to the wine — the Zinfandel is aged in Hungarian Oak while this wine receives no oak at all. Fully destemmed and then crushed and fermented into stainless tanks, the wine receives one sur lees stirring (where the grape pulp, skins, and seeds which fall to the bottom of the fermentation tank are stirred up into the wine again) to give the wine a little more creaminess. 1800 cases produced

Tasting Notes:
Pale greenish gold in color, this wine has a refreshing nose of cut grass, minerals, pastry cream and a tiny hint of chamomile. In the mouth it is smooth in texture with crisp acid that carries primary flavors of pineapple, honey, white nectarines, and chalk. It has a surprisingly long finish for a Sauvignon Blanc. This is certainly one of the best California Sauvignon Blancs I’ve tasted in some time.

This wine is relatively easy to find online and is also available from the winery itself. Give Julianna a call at 707-257-3040.