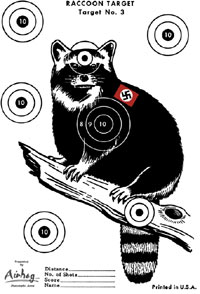 These are troubled times for wine growers around the world. If it’s not too hot, it’s too cold. If its not too rainy, its the biggest drought on record for centuries. Maybe there’s somewhere that grape growing is always idyllic with no problems (Thailand? oops, no, they have tsunamis..) but I haven’t heard of it.

Some of the most severe and vexing problems facing modern winemakers are the ones that seem to come from out of left field (no pun intended). In the America West it’s the glassy winged sharpshooter which rears its ugly miniscule head every once in a while; in South Africa it’s massive flocks of starlings that eat a lot of the grapes; in Italy it’s biblical plagues of locusts devouring fruit.

And now, the perfect villain. A black mask, a swastika in its past, and a penchant for ripe Riesling. The Nazi Raccoon.

Once you stop chuckling (I still erupt into giggles every time I read the headline), I’ll tell you that the raccoons were introduced to Germany by Nazi air force chief Hermann Goering in 1934 to ‘enrich’ Germany’s fauna. They have no natural predators, are extremely adaptable to both urban and rural settings, and they breed like rabbits.

Now, apparently thousands of them have descended upon certain areas of vineyard land in Brandenburg and have literally ruined the harvest. Tough times for grape growers indeed, and ultimately no laughing matter, as people’s livelihoods are on the line. But why did they have to be Nazi raccoons… ?