The Grand Crus of Sake: Selections from Niigata Prefecture 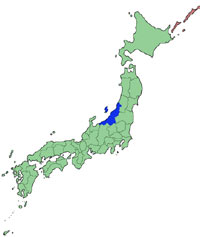 While it’s silly to try and draw parallels between sake and wine, which are so different in their creation and provenance, it’s hard not to think about Niigata prefecture like Bordeaux. It is simply the most famous region of Japan (and therefore the world) for sake. Even before I knew the difference between a ginjo and daiginjo sake (daiginjo is made from rice grains that have been polished down about 20% more than those used to make ginjo sake) I had drunk enough sake with Japanese businessmen to get the picture that Niigata was where it was at when it came to sake. They talked about it with the same combination of reverence and arrogance that I still hear some people use when speaking about the last time they had a Crozes-Hermitage or a Gevrey-Chambertin.

Niigata prefecture lies across the main body of Honshu, Japan’s largest island, from the city of Tokyo. This means it sits about 200 miles to the north-northwest of Tokyo and sweeps down from the central mountains towards the Sea of Japan. Those mountains are perhaps the most prominent and important feature of the prefecture, because they mean that Niigata gets more snowfall than just about anywhere else in Japan — up to 30 feet per year. It is this snow that is responsible for creating (again I stretch to make a comparison) the terroir of Niigata that can be said to influence the sake.

It’s always tricky to talk about terroir when it comes to sake, because much premium sake in Japan (no matter what prefecture it is from) is made from the Yamada Nishiki rice variety that is grown primarily in Hyogo prefecture, and generally one of several varieties of standardized yeasts are also used. So what does that leave to be affected by terroir? Well, there’s only one other ingredient in sake besides rice and the yeast and mold, and that’s water. This is where the snow comes in. Master sake brewers pay very close attention to the water that is used in their sake, and clear streams fed by pure snowmelt are prized for their water.

The snow climate of Niigata is also said to have other beneficial effects on sake production, which include the very clear air. In addition to yeast, sake brewing involves the use of a mold called Koji, which is particularly sensitive to airborne impurities. Most sake brewing takes place during the winter months, where the constant snowfall strips impurities from the air.

In addition to any particular claims of an ideal or even unique climate, Niigata prefecture is home to mostly small, family run breweries, some of which have been around for centuries. While it produces only 8% of the sake made in Japan, it hosts some of the most famous breweries in the nation as well as the Niigata Sake Institute, the only organization of its kind in the country, focused on the science and process of sake production.

I had a chance recently to taste through a selection of premium and ultra-premium sakes from the region that are being imported by a new company focused exclusively on sakes from Niigata Prefecture. Niigata Sake Selections works directly with small breweries to bring their best sakes to market in the United States.

Matsunoi Shuzojo “Wishing Well” Tokubetsu Honjozo Sake
Perfectly colorless in the glass, this sake has a comforting nose of aromas similar to banana bread and buttermilk. In the mouth it is thick and silky and the creamy flavors of buttermilk continue, mixed with sawdust and a light floral quality that approximates the light scent of yellow dandelions. Despite its creaminess, this sake is not heavy on the palate and has a reasonable finish. Its flavors are quite unique. Score: 8.5/9. Cost: $21 for 720ml.

Kinshihai Shuzo “Snow Shadow” Tokubetsu Junmai Sake
Colorless with slight blonde highlights, this sake has a classic Niigata aroma profile of light floral scents, hints of cedar, and the clean slightly mineral-like smell of fresh rainwater. In the mouth it is light on the tongue with a tiny hint of floral sweetness over earthen tones. It tapers to a long finish. Not particularly complex, but very pleasant.
Score: 9. Cost: $21 for 720ml, $16 for 180ml .

Kirinzan Shuzo “Kirinzan” Junmai Daiginjo Sake
Completely colorless, this sake has a very floral, perfumed nose that even smells a bit sweet at first. In the mouth however, it leans towards spiciness rather than sweet, with a slight bitterness of wood flavors, and a few other complex notes that are hard to pin down. It’s got a long finish with a little bit of alcoholic heat on it, but that doesn’t prevent it from being very satisfying. Score: 9/9.5. Cost: $65.77 for 720ml.

Kiminoi Shuzo “Emperor’s Well” Junmai Ginjo Sake
Transparent in the glass, with tiny hints of pale green in the highlights, this sake has an amazingly distinct nose that smells, honestly, like chocolate milk with a tiny bit of malt added. In the mouth it has a heavy, silky mouthfeel and is just slightly sweet with floral and melon flavors mixed with a little yeastiness that tapers into a decent finish. An extremely distinctive sake. Score: 9. Cost: $31 for 720ml.

Minogawa Shuzo “Koshi Omachi” Daiginjo Sake
Colorless as it is poured from its distinctive hand blown blue glass bottle, this sake has a nose of pastry cream and the smell of good quality jasmine rice just as you lift the lid off the rice cooker. In the mouth it has excellent balance with a nice acidity, and very clean flavors of rainwater, floral essences, and gelatin, with a remarkably long finish for a sake. A classic daiginjo. Score: 9.5/10. Cost: $82.00 for 750ml, $18 for 180ml.

Aoki Shuzo “Kakurei” Junmai Ginjo Sake
Colorless in the glass, this sake has surprisingly earthy nose of mud and fresh clay. In the mouth it has strong acidity with light tropical fruit flavors (banana?), as well as some light minerality. Finishes with some heat.
Score: 8.5. Cost: $33 for 720 ml.

Musashino Shuzo “Buna no Tsuyu -Dewdrops” Tokubetsu Junmai Sake
Completely colorless, this sake has a mellow nose of lychee scents mixed with a slight, pleasant mustiness of old paper or a dusty room. In the mouth it has a nice balance but not particularly distinctive flavors, with some notes of dry hay and ginger, that last through a fairly long finish. Score: 8.5. Cost: $32 for 720ml.

Midorikawa Shuzo “Green River” Honjozo Sake
For some reason this sake struck me as particularly shiny — despite being colorless it had a brightness to it. Its nose is filled with fresh herb scents mixed with aromas of malt. In the mouth those malted notes dominate with flavors of malted milk and nougat, through a moderate finish. Score: 8.5/9. Cost: $31 for 720ml.

Obata Shuzo “Nature Island” Daiginjo Sake
Colorless in the glass, this sake has a perfectly floral nose with scents of jasmine and gardenia scented rainwater. In the mouth it is light and bright with cool subtle floral flavors and a clean creaminess. Very delicate and pretty. A perfect sashimi sake. Score: 9/9.5. Cost: $49 for 720ml, $16 for 180ml.

Ichishima Shuzo “Coy” Junmai Sake
Colorless in the glass, this sake smells like the cheap dry bubblegum you used to get out of those glass bowl and metal vending machines outside of supermarkets when you were a kid. In the mouth it is overly sweet with very high acidity and slightly soapy, fruity flavors that again bring to mind bubble gum. While I can imagine someone enjoying these flavors I had a very hard time with them myself, especially because they were far from subtle. Score: 7.5/8. Cost: $18 for 500ml.

HOW TO BUY THESE SAKES:
All of these sakes are just now (literally in the last couple of weeks) becoming available in the United States. They are imported by Niigata Sake Selections and distributed currently in California, Illinois, New York, New Jersey, and Connecticut. If you are interested in getting ahold of them, give Michael Simkin a call at 917.304.6501 or drop him or his partner Ataru Kobayashi an e-mail at mjsimkin@earthlink.net or ataru@niigatasake.com.