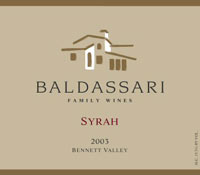 I’ve said more than once how energized I am by the new wineries that seem to be popping up every month or so throughout the state. Like mushrooms on the forest floor after a nice rain, they seem to appear out of nowhere. Many of them are small family operations or even estateless wineries, but regardless of the form, they are usually the result of someone’s dream, and so I’m always excited to hear about them.

It’s hard to get any more brand new than Baldassari Family Vineyards and this Syrah. They are a brand new winery, this is their inaugural vintage of their only wine released only two months ago, and they are in a brand new sub-appellation for Sonoma County. By all counts they still have that new winery smell. Luckily, it’s got some notes of black plum and tobacco to it.

Baldassari is the maternal family name of the Michael family, and in particular the name of one grandpa Jimmy Baldassari, who emigrated to the United States from Italy in the early part of the century for a fresh start. For grandpa Jimmy, that meant starting a plumbing shop and making wine at home. It was in this home wine cellar that Matt Michael got his first lessons in fermentation science, no doubt along with lessons in proper pipe fitting.

The lessons made enough of an impression that a decade later, upon graduating from high school, Matt went straight into the winemaking program at U.C. Davis with the singular goal of becoming a winemaker. His education was followed by stints working in the fields and cellars of California and New Zealand before coming home to the family estate in Bennett Valley.

Of course, it might not have been Bennett Valley when he left. One of California’s newest appellations, having just been approved in December 2003, Bennett Valley is a small (700 acres of vines) elevated plateau of growing area directly south of Santa Rosa, CA and sandwiched between the Sonoma Coast growing area and the Sonoma Valley growing area. Roughly defined by the watershed of Matanzas creek, this small valley is tucked between three prominent peaks while its forth exposure is a gap towards the west through which the coastal fog pours on a regular basis. Marked by rocky, volcanic soil, it has a long cool growing season thanks to its elevation and this fog effect, making for long hang times, generally accepted as a good thing. Currently Baldassari is one of only two working wineries in the appellation, though it hosts as many as 40 different vineyards.

This wine is made from 100% Syrah and spent 12 days fermenting in large open top vats being punched down (having the skins and pulp which float to the surface pushed down into the fermenting wine) twice per day. It was aged for 13 months in 75% French oak barrels that were one year old, and 25% new American oak barrels. 122 cases made.

Full disclosure: I received this wine as a press sample for review.

Tasting Notes:
Dark, nearly opaque ruby in the glass, this wine initially had a very tightly closed nose, but with some time and air, opened up to reveal notes of blueberries, tobacco, carob, and coffee. In the mouth it is young and tightly wound, with thick dense flavors of black cherry, ripe plums, and boysenberries underscored by a hint of earthiness and mineral elements. The wine has slightly green tannins that need some mellowing with time, but in general has a good balance (thankfully NOT a fruit bomb) and to my mind an excellent potential to improve with some age. The finish is relatively substantial, though marked at the moment with a slight bitterness from the tannins that I found less than exciting, this may fade over time. A very promising first release.

Food Pairing:
As this wine is so very young, if it is drunk soon it must be with charred meats — grilled lamb or grilled sausage is always a good bet. You could try it, for instance, with this spicy jerked pork.

This wine is available for sale online.