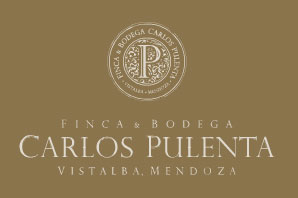 Beginning a new winery venture in a region with a long history of viticulture provides the aspiring new winery the opportunity to avoid starting from scratch. While many of Mendoza’s wineries fell into disuse in the 1920’s, agricultural pressure in the region was low, and many old vineyards and vineyard sites survived. Still more were planted optimistically as the country began to recover from its extreme drop in wine consumption, but then abandoned when the recovery proceeded slower than the hopes of many winegrowers. The net result of such trends, large tracts of vineyards in various states of disrepair are just waiting for enterprising winemakers with the means to buy them up and create entirely new wineries whose first vintages can be made from fifty-year-old vines.

If there is a better example of this phenomenon in Mendoza than Finca and Bodega Carlos Pulenta, I haven’t heard of it. This recently completed winery (2005) has just opened its doors, and has quickly become of the the flagship wineries of the Lujan de Cuyo region, south of Mendoza’s city limits. Named after its founder and visionary Carlos Pulenta (not to be confused with his

brother’s winery, named Pulenta Estate) the winery seems to be an example of what can be accomplished in Mendoza when money truly is no object. Luckily for the neighborhood, however, with Pulenta’s deep pockets came an understated taste and a bias towards the functional. While certainly lavish in its details, the winery is understated in its physical presence, and does not strive towards the status of architectural monument, as do other new wineries in the area.

Instead of erecting a palace, Pulenta has instead focused on building an incredibly modern and focused facility for winemaking, in the hopes of maximizing the quality of his wines. An entirely gravity-fed operation, requiring no pumping at any point in the harvest and crush process, the winery also incorporates state of the art humidity and air circulation systems in the cellars which keep the barrel and bottle aging rooms at a precise 80% humidity and 59 degrees Fahrenheit. Each barrel and every single bottle in storage is assigned a barcode tag allowing precise tracking throughout the production process. Special, custom-made concrete vats with built-in micro-oxygenation capabilities also have internal liquid cooled temperature regulation systems.

The estate winery includes around 120 acres of vineyard with an average vine age of 55 years (there are a few blocks which were planted in 1999 shortly after the property was purchased). Located in a section of Lujan de Cuyo known as Vistalba, these vineyards are planted with an average density of 2250 vines per acre and lie approximately 3000 feet above sea level on the sloping alluvial plains of Mendoza province. In addition to these estate vineyards, which are used to produce the winery’s three flagship blended wines, the winery also owns vineyards in the Tunuyan region of the Uco Valley, whose fruit are used to produce the Tomero line of wines.

The Tomero wines are named after a municipal role created in 1884 by the government of Mendoza Province. The Tomero was someone who regulated and engineered the distribution of water from the Mendoza river for irrigation

of vineyards. These men were literally responsible for the lifeblood of the vineyards, and it was a profession that passed from father to son for many decades. This line of wines is primarily vinified and aged in steel tanks, and designed for drinking at a younger age.

The winery’s other line of wines, which bear the name Vistalba, are each distinct blends which are assembled each year with no set formula, but which contain varying mixtures of Malbec, Cabernet Sauvignon, Bonarda, and Merlot. These wines are vinified, using natural yeasts whenever possible, in the concrete tanks and then aged for a minimum of 12 months in new French oak, and then for another 10 months in the bottle before release. The Corte A, or Blend “A,” is aged for a full 18 months before bottling.

The grapes for both lines of wines are treated exactly the same, and use the same temperature controlled, gravity fed facilities. All grapes are picked by hand in multiple passes through the vineyards, and sorted once at the bin level and then again before crushing to ensure a uniformly high quality of fruit.

Finally, on a somewhat non-wine related note, but one of interest to anyone visiting the region, the winery is also home to La Bourgogne, which Ruth and I believe to be unquestionably the best restaurant in Mendoza, and one of the top restaurants in the country.

2005 Carlos Pulenta “Tomero” Rose of Malbec, Uco Valley, Mendoza
The color of a perfect pink rose in the glass, this wine has a tart smelling nose of mineral and redcurrant scents. In the mouth the wine is silky and slightly thick on the tongue with bright flavors of fresh strawberries and crushed stones, with a light to moderate sweetness. A nice acid balance keeps the wine from being syrupy. Sweet, but refreshing, this wine makes a lovely aperitif or pairing for lighter foods or hors d’oeuvres. Score: 8.5/9. Cost: $??.

2005 Carlos Pulenta “Tomero” Sauvignon Blanc, Uco Valley, Mendoza
Light green-gold in the glass, this wine has a nose of grassy aromas, mixed with nice scents of apples and grapefruit. In the mouth the wine has nice acid, and a slight creaminess that betrays some of its partial oak treatment. The main flavors are of grapefruit, unripe pears, and a light herbaceous minerality that makes for a somewhat complex flavor profile. The wine is not quite as bracing and sharp as I like my Sauvignon Blancs, but is very flavorful and pleasing, especially when paired with food. Score: 9. Cost: $??.

2004 Carlos Pulenta “Tomero” Semillon Blend, Uco Valley, Mendoza
Rich gold in the glass, with green tinges, this wine has a lovely and unique nose of cold cream, green lettuce, and dried mushrooms. In the mouth it brushes satin-like across the palate with a very nice balance between aromatic flavors such as honeysuckle and gardenia and softer more savory flavors of pastry cream and minerals. A blend of Semillon and Chardonnay, the wine has a unique personality which will not appeal to every drinker, but which I found very attractive. Score: 9/9.5. Cost: $??.

2004 Carlos Pulenta “Tomero” Cabernet Sauvignon, Uco Valley, Mendoza
Dark ruby in color, this wine has a classic nose of cherry cola with vanilla overtones. In the mouth it is rich and full bodied with oak influences flavors of bing cherry, vanilla, and Dr. Pepper. The tannins are very light and soft, taking a back seat to lush fruit and notes of spices which emerge in a long finish. This is a textbook new-world Cabernet that would feel right at home in Napa, polished but pleasurable. Score: 9/9.5. Cost: $15.

2003 Carlos Pulenta “Vistalba Corte A” Estate Red Blend, Lujan de Cuyo, Mendoza
Dark, nearly opaque ruby in the glass, this wine has a nose that walks the line between floral and rich earthy aromas, incorporating scents of wildflowers and prunes, and later dark black cherry as the wine opens up. In the mouth the wine is huge, brooding, and deep, with resonant flavors of cassis, black cherry, and graphite supported by velvet soft but burly tannins. This wine has a depth and power associated with high alcohol wines, yet at a mere 13.9% it carries itself like a thoroughbred — controlled and powerful. Score: 9.5. Cost: $60.

2003 Carlos Pulenta “Vistalba Corte B” Estate Red Blend, Lujan de Cuyo, Mendoza
Dark ruby in the glass, and only a tiny bit less inky than its brother, the “A,” this wine also has a rich dark loamy nose of wet earthy aromas, black cherries, and the slight hint of mulberry. In the mouth this wine is full bodied, round, and expansive. Well balanced in both its texture and acids, the flavors lean towards slightly brighter fruit than the “A” blend, with blackcurrant flavors dominating and notes of minerals and wet earth in the background all the way through the impressive finish. A blend of 42% Malbec, 32% Cabernet, 16% Bonarda and 10% Merlot, this is one of the better value wines we encountered on our trip. Score: 9.5. Cost: $23.

These wines, including the Corte C, which I did not get a chance to taste, are gradually becoming available in the US, and some of the Vistalba wines are available for sale on the Internet.